While votes for Donald Trump and Joe Biden were still being counted in a tightly fought election, one thing was immediately clear: this was not an overwhelming repudiation of the US president’s handling of the coronavirus pandemic.

“If this election proved one thing, it is that there are a still a lot of Trump supporters who like his message that the pandemic is about to come to an end,” said Ashish Jha, dean of the school of public health at Brown University. “Even if Joe Biden does win the election, he is walking into a divided country as far as coronavirus goes.”

Mr Biden had put coronavirus at the centre of his campaign, accusing Mr Trump of putting millions of American lives at risk by failing to take the threat of the virus seriously. “The first step to beating the virus is beating Donald Trump,” he told supporters on the final day of the campaign.

In contrast, Mr Trump argued repeatedly that the country was “turning a corner” on the pandemic, even as cases have continued to rise, climbing over 9.3m, according to the latest figures from the Covid Tracking Project.

Now public health experts worry that Mr Trump’s success in persuading many of his supporters that the virus is not a threat will make it even harder for officials to fight the pandemic in the weeks and months ahead.

In some swing states — particularly Midwestern states, which Mr Trump won in 2016 but where coronavirus cases have recently climbed steeply — there was some evidence that Mr Biden’s stance on the pandemic may have helped him.

“While the number of local coronavirus cases was not necessarily a strong predictor of whether someone would vote for Mr Biden, their level of concern over the virus was,” said Gary Langer, co-founder of polling company Langer Research Associates.

In Wisconsin, which on Thursday Mr Biden looked set to take by less than a percentage point, pollsters said coronavirus may have made the difference between victory and defeat. According to an exit poll conducted by Edison Research, voters in the state backed Mr Biden as the better candidate to deal with the pandemic by 55 per cent to 41 per cent.

But voter behaviour in Wisconsin, where new cases recently hit a peak of 4,500 in a day and 14 per cent of tests are coming back positive, was not reflected in many other parts of the country.

“The number of states where it was likely that coronavirus would be the determinative factor was always going to be small,” said Mike Greenfield, chief executive of Change Research. “But Wisconsin might just end up being the one state where it proves the difference between a two-point Trump win and a two-point Biden win.”

In some states where the pandemic is raging, Mr Trump improved on his 2016 result. He won a higher percentage of the vote in 2020 than in 2016 in both North Dakota, which is currently reporting around 1,500 new cases per million people a day, and in South Dakota, where daily new cases have reached 1,300 per million. Those infection rates are over four times higher than in the UK, which just imposed a new national lockdown.

One reason Mr Trump ran Mr Biden close even where coronavirus cases have recently been high is that relatively few voters put the issue at the top of their list of priorities. 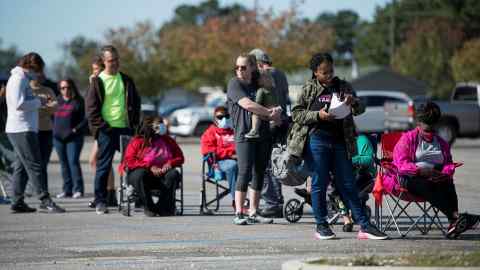 Those voting trends highlighted the challenge for officials trying to fight the pandemic, health experts said. “We have states now that have 40/50 per cent positivity rates and still no mask use — that has got to be fixed,” said Eric Topol, director of the Scripps Research Translational Institute.

Even if Mr Biden does win, he will not enter the White House until late January, giving Mr Trump another two months in office. Few expect him to reverse course on his current approach to the virus during that time and scientists warn those weeks could be crucial to halting the third wave of cases currently taking hold across much of the country.

“Even if Biden wins, he is not going to be president for another two and a half months,” said Mr Jha. “Things are going to get dramatically worse in that time.”

Mr Topol added, however, that the next president, whether Mr Trump or Mr Biden, will be likely to have a host of new tools to fight the disease by the end of January, including new antibody therapies and possibly several approved vaccines.

“In 2021 we will start to see a turnaround, and the options on treatments, vaccines and tests will look different for whoever is president,” he said.