Biden has tough path to navigate to achieve further stimulus

Joe Biden wants Congress to rapidly reach a deal on new fiscal stimulus, in an attempt to boost the US recovery before he takes office in January.

The US president-elect’s platform in the election against Donald Trump included a variety of measures to deliver near-term support to the world’s largest economy, such as aid to state and local governments and enhanced unemployment benefits.

The urgency of that aid has increased in recent weeks as coronavirus cases have risen sharply and some local authorities have started to tighten health restrictions.

Even though the US unemployment rate continued its fall to hit 6.9 per cent in October, the pace of jobs growth has slowed. That has led some economists to warn it would be risky for to wait for Mr Biden to enter the White House to enact stimulus legislation.

The last fiscal package was months ago. [Mr Biden] wants a tailwind, not a headwind, on January 20

“Biden believes that Republicans and Democrats need to come together and take action on immediate relief for the American people. If Congress will not act imminently, he will start working to pass relief the moment he’s sworn in.”

The call for a swift stimulus deal represents an early test of Mr Biden’s ability to drive compromise on Capitol Hill, where he worked for most of his political career as a senator from Delaware. During the campaign, Mr Biden repeatedly said the $3tn in fiscal measures adopted at the start of the pandemic were insufficient, and criticised Mr Trump for failing to shepherd Congress to a new agreement.

But it is unclear to what extent Mr Biden and his advisers will be able to shape the stimulus negotiations in the coming weeks. The president-elect still has no formal role in legislating and key Republican counterparts including Mr Trump and Mitch McConnell, Senate majority leader, are contesting the election result. At the very least, one Democratic congressional aide said he expected Mr Biden’s economic team to “reach out” and discuss the stimulus negotiations.

Talks on a large new stimulus package worth up to $2tn between Nancy Pelosi, the Democratic House speaker, and Steven Mnuchin, the Treasury secretary, faltered in the run-up to the vote. Mr Trump prevaricated on his desire for a deal.

After a strong performance in the congressional elections by Senate Republican candidates, who are hawkish on spending, the pricetag of any fiscal agreement before the end of the year is expected to fall between $500bn and $1tn.

But some analysts say that may be enough for Mr Biden or House Democrats, since the economic incentives for the incoming president are so strong and a smaller deal is not expected to preclude more stimulus next year.

“The last fiscal package was months ago. [Mr Biden] wants a tailwind, not a headwind, on January 20,” said Chris Krueger, a policy analyst at Cowen Washington Research Group, referring to inauguration day.

The jostling over stimulus may be a harbinger of the tricky political dynamic facing Mr Biden on economic policy once he takes office. Unless Democrats win two run-off races for Senate seats in Georgia in January, Republicans will retain control in the upper chamber, significantly impairing Mr Biden’s ability to push through his economic agenda. In addition to short-term stimulus, this includes sweeping investments in public goods from infrastructure to green energy and childcare, paid for with higher taxes on corporations and wealthy Americans. 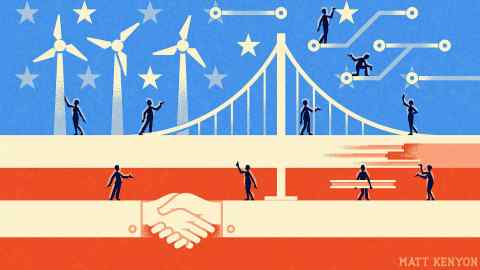 One potential area of compromise could be infrastructure, which is popular across parties but Mr Trump failed to reach any deal on.

Business groups are urging Mr Biden and Congress to focus squarely on that. “We believe the first order of business for the new Congress and the new administration is a broad-based infrastructure programme that addresses not just the traditional aspects of roads, bridges, transit — but deals with the lack of broadband connectivity across this country, that helps build resiliency into our infrastructure to combat climate change and help those communities . . . underserved from past investments,” said Neil Bradley, chief policy officer at the US Chamber of Commerce.

If Mr Biden faces heavy resistance to his economic agenda on Capitol Hill, he may have to make more use of executive orders and regulation to implement parts of his policy plans. This could include in areas ranging from international taxation to student loans.