There had been rumblings that Joe Biden was lacking a theme. “Build Back Better” summarised his post-Covid plans but it lacked binary punch. Light versus darkness more than meets that test.

It is hard to say whether Mr Biden gave the speech of his life on Thursday night, as some instantly declared. After half a century in politics, it is doubtful anyone was in a position to judge. But Mr Biden’s address — and the four nights of virtual Democratic programming that preceded it — more than cleared the low expectations of pandemic campaigning.

“I will be an ally of the light, not the darkness,” Mr Biden declared. In ordinary times such words would have sounded corny. But their stark framing — and the personality of the nominee who delivered it — somehow captured the moment.

Will it move the needle? Conventions rarely alter the outcome of a presidential election. But as Hillary Clinton discovered in 2016, they can poison a campaign. The 2020 convention cleared that hurdle. In contrast to Mrs Clinton’s Philadelphia convention, Mr Biden’s was largely free of rancour.

Having picked his sharpest primary critic, Kamala Harris, as his running mate, Mr Biden had already dealt with some of that. Bernie Sanders’ warm endorsement also came in sharp relief to his begrudging pledge four years ago. The only prominent former rival who seemed to have been omitted was Julián Castro, who cruelly queried in a debate whether Mr Biden could remember what he had said two minutes earlier. For the time being at least, Mr Biden’s well delivered address ought to dispel any mutterings about mental decline.

But the big highlight of the convention was the people nobody had heard of. The thread of often moving cameos would have been hard to pull off in a traditional jamboree amid the straw hats and ubiquitous streamers. On the opening night, viewers reacted most strongly to Kristin Urquiza, who told of the death of her Trump-voting father from coronavirus. He had taken Mr Trump at his word that the pathogen was not a serious threat. “His only pre-existing condition was trusting Trump,” his daughter said.

Likewise, the story told by Estela Juarez, an 11-year-old girl from Florida whose mother was deported two years ago, outshone the formulaic addresses of so many politicians. “Instead of protecting us, you tore our world apart,” she said. The same applied to Ed Good, the 95-year-old second world war veteran, who said he would not be voting Republican for the first time in his life, and to the 13-year-old Brayden Harrington, whose acute stutter drew Mr Biden’s sympathy at a rally this year.

Among the household names, one of the few who competed with such tales was Michelle Obama, whose speech made it clear that 2020 would be no ordinary election. “If you think things cannot possibly get worse, trust me; they can,” Ms Obama said. 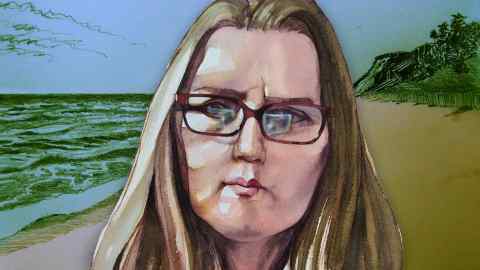 The convention set up two narratives that will resurface in the coming weeks. The first is the left’s quiescence to what they see as a largely centrist platform. Many did complain that Michael Bloomberg, the billionaire former New York mayor, was given a prime moment on the final night. This highlighted the brevity of congresswoman Alexandria Ocasio-Cortez’s speaking slot, and the absence of others on the progressive wing of the party. So far it appears Mr Biden’s doubters have agreed to keep a lid on their misgivings. His longstanding relationship with Mr Sanders is crucial to that.

The second is that the Biden campaign wants this election to be about character. To varying degrees that is true of all US presidential contests, which boil down to two people. But in 2020, character will predominate. In his address, Mr Biden, frequently talked of compassion, dignity, respect, kindness and decency. The previous night Ms Harris, a former prosecutor, said “I know a predator when I see one”.

It is hard to imagine any ideology that could unite the numerous Republicans who endorsed Mr Biden over the past four days with Mr Sanders’ socialist fan base. But when the choice is reduced to personality opposites — an ageing Luke Skywalker versus Darth Vader — the strangest bedfellows fall into line. That is how the Biden campaign wants America to see this election.

Previous PostMeasuring the impact of a home visiting programme on child skillsNext PostFormFactor Is Set To Continue Growing For Years (NASDAQ:FORM)