Less than 48 hours after the polls closed on Tuesday, Democratic members of Congress gathered for a conference call.

The fiery debate that ensued gives an insight into a key challenge facing President-elect Joe Biden; keeping moderate and progressive Democrats from tearing the party apart.

While the Democratic presidential candidate was closing in on the 270 electoral college votes required to defeat Donald Trump, many of the party’s “down ballot” candidates for the US Senate and House of Representatives had fallen short. Democrats were unlikely to take back control of the Senate, while in the House, they were clinging on to power with a diminished majority.

Democrats on the three-plus-hour call on Thursday were distraught, especially self-styled centrists who lost their seats, or who had eked out narrow wins in the face of tough challenges from Republicans. Many blamed the most progressive members of their caucus, such as first-term congresswoman Alexandria Ocasio-Cortez, for tarnishing the party’s brand with calls to “defund the police” and embrace “socialist” policies such as Medicare for All, which would effectively eliminate private health insurance in the US.

In audio published by the Washington Post, Abigail Spanberger, a first-term congresswoman from Virginia who had secured re-election by a single point margin, tore into many of her colleagues.

“If we are classifying Tuesday as a success from a congressional standpoint, we will get [expletive] torn apart in 2022,” she said.

The tensions raise questions not only about how Nancy Pelosi, the Democratic Speaker of the House, would prevent infighting in her caucus, but also how Mr Biden, who has branded himself as a centrist who can reach across the political aisle, would balance the interests of progressives and moderates within his own party when he becomes president.

Mrs Pelosi on Friday played down the rancorous phone call, telling reporters the fireworks demonstrated the “beautiful dynamism” of the Democratic party.

“I would say we have a healthy difference of opinion in our caucus, but not in any way to be problematic,” she added.

But Larry Sabato, of the University of Virginia Center for Politics, warned: “One of Biden’s real difficulties is going to be keeping the left and centre from battling with one another constantly.”

He added that Mr Biden would at the same time need to figure out how to work with Mitch McConnell, the obstructionist Republican Senate majority leader and the most powerful GOP member in Washington following Mr Trump’s defeat. Any legislative deal with Mr McConnell would likely be outright rejected by progressive Democrats, and a tough sell to centrists, given the Senate majority leader’s conservative record.

“All of the elements are here for turmoil and internecine warfare and infighting of all sorts,” Mr Sabato said.

Progressives and moderates are already drawing their lines in the sand.

Ms Ocasio-Cortez on Friday said on Twitter that there were “folks running around on TV blaming progressivism for Dem underperformance”. But she argued that “awful execution on digital” had been to blame for the poor performance of many centrist Democrats.

“[Ms Ocasio-Cortez] doesn’t understand that Queens isn’t anything like exurban Richmond,” he said.

READ ALSO  A Tale Of Two Markets: Visualizing The Huge Impact Of The Covid Vaccine Across Assets

“Fundamentally, the Democratic brand is not all that strong outside of areas that are very blue,” he added. “Voters look at [moderate House Democrats], they look at who is running for the state house and they see Bernie Sanders or AOC or Nancy Pelosi.” 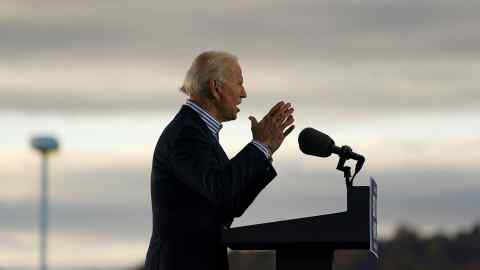 Meanwhile, activists behind the success of Ms Ocasio-Cortez and other young progressives, many of whom have been elected after defeating incumbent Democrats in primary contests, reject the notion that they need to dilute their positions, saying Republicans have long labelled Democrats as socialists.

“Spanberger was attacked as a socialist when she ran in 2018. President Obama was attacked as a radical Marxist throughout his presidency, and somehow he still managed to win Florida,” said Waleed Shahid, communications director of Justice Democrats.

Justice Democrats was a driving force behind the election of Ms Ocasio-Cortez and other members of the so-called “Squad” — Massachusetts congresswoman Ayanna Pressley, Minnesota congresswoman Ilhan Omar and Michigan congresswoman Rashida Tlaib. Their numbers will be boosted in the next Congress with the addition of Jamaal Bowman from New York, Cori Bush from Missouri and Marie Newman from Illinois, who all won their races on Tuesday.

“There will be a lot of choices ahead of Democrats about how much they are willing to co-operate with Mitch McConnell’s agenda in the name of getting things done,” Mr Shahid added. “I think that some of the divides in the Democratic party will probably become even more prominent if they choose to go down that conciliatory path.”