Joe Biden will face an escalating coronavirus crisis when he takes office in January, scientists have warned, as case numbers across the US rise sharply.

The president-elect has promised to make tackling the pandemic his administration’s first priority, and will on Monday name a new task force of scientists to advise him on dealing with the spread of the disease.

But health experts warn Mr Biden is likely to inherit a potentially disastrous situation, having to deal with the rampant spread of the disease as well as a public that is exhausted and distrustful of medical advice.

Tom Frieden, the former head of the US Centers for Disease Control and Prevention, said: “Joe Biden and the country as a whole face an enormous challenge in the coming weeks and months.

“We are about to head into holiday season, when people are going to mingle indoors, eating, drinking and singing. The virus is already out of control in many parts of the country and this is the perfect scenario for spreading it further.”

The US on Saturday reported more than 128,000 new coronavirus cases — the fourth day in a row of more than 100,000 infections. Almost every state reported rising trends in infections and hospitalisations. 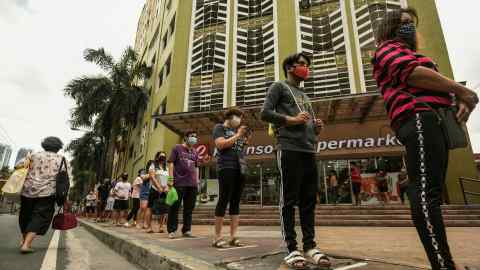 The latest figures from the Covid Tracking Project show there have been almost 9.7m cases in the US since the pandemic began and more than 220,000 deaths.

Mr Biden put fighting the disease at the heart of his election campaign, although the results showed his party lost ground in places where the disease had spread the most, highlighting how difficult it will be to persuade large parts of the country to follow his plan.

Angela Rasmussen, a virologist at Columbia University, said: “The American public has been gaslighted for the past four months about this pandemic. It is going to be take a huge effort to persuade them that the government is levelling with them.”

The president-elect will start work immediately on formulating his plans for how to bring it under control, announcing a 12-person panel of scientists and other experts who will shadow the work being done by the White House coronavirus task force.

The task force will be chaired by Vivek Murthy, the former surgeon-general, and David Kessler, the former head of the Food and Drugs Administration.

In his acceptance speech on Saturday night, Mr Biden said his Covid-19 plan “will be built on a bedrock of science. It will be constructed out of compassion, empathy and concern”.

The president-elect has previously said that, if elected, he would mandate mask-wearing on all federal property, but he will face a host of other difficult decisions when he enters office, including how to distribute any vaccine that is authorised.

With Donald Trump refusing to concede the election however, it remains unclear how Mr Biden’s task force will dovetail with that of the outgoing president.

Mr Trump has not met his task force for weeks, say senior administration officials, while his chief of staff Mark Meadows said last month that the country was “not going to control” the pandemic. Mr Meadows himself came down with the virus last week — one of a number of presidential aides to test positive in the latest White House outbreak.

The outgoing president has appointed Scott Atlas, who is not an infectious disease expert, as his personal coronavirus adviser in an attempt to circumvent officials such as Anthony Fauci, the head of the National Institute of Allergy and Infectious Diseases.

Mr Trump — who himself was hospitalised by the deadly virus — and his aides have repeatedly attacked Dr Fauci, whose grim public statements on the pandemic have conflicted with the administration’s more rosy forecasts.