Best Buy boosted by trend for working at home

The rise of homeworking has boosted sales for Best Buy, as consumers flocked to the biggest US electronics retailer to buy computers, printers and other gear in droves.

Movement restrictions initially hit Best Buy, which closed its stores to customers in March and limited its services to online orders and kerbside collection as a wave of lockdowns swept across the US.

However, digital sales boomed through the quarter ending August 1, according to its earnings release on Tuesday. US ecommerce sales more than tripled to $4.85bn, accounting for more than half of domestic revenues compared with just 16.1 per cent in the same period last year.

Bricks-and-mortar sales improved after Best Buy, which operates about 1,175 large-format stores across the US, Canada and Mexico, began to reopen outlets as restrictions eased.

The retailer said on Tuesday that sales across the group had jumped about 16 per cent year on year in the last seven weeks of its second quarter. Sales also rose 20 per cent in the first three weeks of August, although the company said they were unlikely to continue to increase at this pace throughout the third quarter.

Corie Barry, chief executive, said in a statement: “Products that help people work, learn, connect and cook at home, like computing, appliances and tablets, were the largest drivers of our sales growth for the quarter.”

The results further underscore how US retailers’ fortunes have diverged during the pandemic.

A handful of other large big-box retailers, including Walmart, Target and Home Depot, have enjoyed their busiest period in years in sales. In contrast, department stores, clothing outlets and other mall-based chains are recovering only gradually from sharp sales declines.

Best Buy produced revenues in the three months to August 1 of $9.91bn, a rise of 3.9 per cent from the same period a year ago.

Accessories including microphones and cables have sold well at Best Buy, as have consoles and games as consumers spend more time entertaining themselves at home. 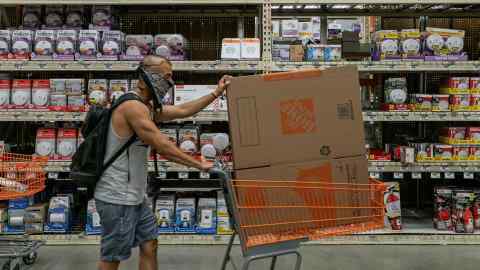 Expenses at the Minnesota-based company, which furloughed employees during lockdown, also fell in the quarter. Best Buy’s selling, general and administrative expenses totalled $1.54bn compared with $1.74bn the same period a year ago.

However, Best Buy said it was planning for these expenses in the third quarter to be “more in line” with 2019 levels as it fully reopens stores.

The company declined to provide financial guidance for the full year.

Among the factors expected to influence Best Buy’s performance in the months ahead are unemployment, government stimulus and inventory availability, as well as the severity and duration of the pandemic, according to Matt Bilunas, chief financial officer.

Best Buy shares, which have been trading at record highs to give the company a market capitalisation of $30.3bn, fell about 3 per cent in pre-market trading to $113.88.