For weeks, concern has been rising that the growing protest movement against Germany’s anti-coronavirus restrictions was being hijacked by the far-right. When rightwing radicals waving nationalist flags broke through police barriers on Saturday to storm the Reichstag building, the home of the country’s parliament, those fears were emphatically confirmed.

Politicians reacted furiously, with Annegret Kramp-Karrenbauer, leader of the governing CDU party, saying public anxiety about the clampdown had been “misused for Nazi propaganda”. Frank-Walter Steinmeier, German president, called the Reichstag incident an “intolerable attack on the heart of our democracy”.

Demonstrations against antivirus restrictions have taken place across Europe in recent weeks, with thousands also gathering in London’s Trafalgar Square on Saturday to protest against the UK government’s measures. But the largest and most vociferous have been in Germany, and they are growing. Saturday’s event in Berlin attracted 38,000 participants, far more than a similar protest at the start of the month.

The movement’s success is rooted in its ability to attract people from across the political spectrum. Protesters include virus-deniers, conspiracy theorists and “anti-vaxxers” who oppose immunisations, but also ordinary people who view the anti-Covid-19 measures as an affront to democracy.

But the movement has also drawn people who dream of overthrowing Germany’s postwar dispensation, including neo-Nazis and members of the so-called Reichsbürger, or Citizens of the Reich, a group that questions the authority of the federal republic.

Hundreds of protesters on Saturday carried the black-white-red flag of the German Reich, a symbol closely associated with the far-right. Others held up images of Chancellor Angela Merkel and virologist Christian Drosten, the public face of the authorities’ campaign against the virus, in prison uniforms.

READ ALSO  We must put our greenbacks behind our green rhetoric 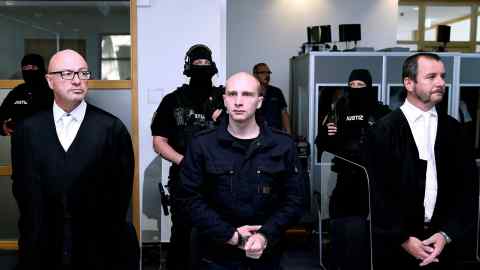 Many at the Berlin rally posed for selfies with Martin Sellner, the Austrian activist who is one of the leaders of the far-right, nationalist Identitarian Movement.

Authorities fear that the anti-corona protests have become happy hunting ground for neo-Nazis seeking fresh recruits. “Such demonstrations are an ideal environment for radical movements to win more and more people for their ideologies,” said Sebastian Fiedler, head of the BDK, the police trade union.

Michael Ballweg, founder of the Querdenken 711 group that organised Saturday’s protest, has sought to distance himself from the extremists. “We are democrats,” he insisted in a speech on Saturday. “Right- and leftwing extremism and . . . inhuman fascist ideology have no place in this movement, and neither does any form of violence.”

Yet some protesters appeared unperturbed by the sight of shaved-head nationalists marching by their side. “You can’t just exclude them from a demonstration,” said Werner Süssmuth, a microbiologist with long grey hair in a ponytail. “There will always be far-left and far-right people in a democracy.”

Ms Kramp-Karrenbauer said, however, that every protester should think about whether their anger at the anti-corona measures “justifies teaming up with Nazis to try and storm the Reichstag”.

The vehemence of the protests has startled some observers. Germany has had a relatively low rate of Covid-19 infections, and its restrictions on public life have been far less draconian than in neighbouring countries.

Even at the height of the lockdown, Germans were allowed to leave their houses and spend time outdoors, while Italians and Spaniards were confined to their homes for weeks. Germany also reopened shops and restaurants more quickly than its neighbours.

But some experts say Germany has become a victim of its own success in containing the pandemic. The relatively low number of deaths has stoked suspicions in some sections of society that the virus is less dangerous than the authorities claim it is, and the anti-corona measures are unnecessary.

They [the antivirus restrictions] are totally excessive. The measures may have been justified at the start but they aren’t any more

“They’re totally excessive,” said one protester on Saturday, who gave her name as Kerstin. “The measures may have been justified at the start but they aren’t any more.”

Similar sentiments are expressed by the protests in other European capital. The Trafalgar Square demonstrators carried placards lambasting not only their own government’s antivirus restrictions but also the World Health Organisation and Bill Gates, the Microsoft co-founder whose charitable foundation has donated billions to identifying a coronavirus vaccine. Some signs described the pandemic as a “hoax” or “scam”.

Some 3,000 people demonstrated in Madrid this month at an event promoted by singer and actor Miguel Bosé, who has railed against Mr Gates and the rollout of 5G mobile phone infrastructure that some believe is the real cause of Covid-19.

Sporadic campaigns against face masks have also taken place in France and elsewhere.

Germany’s corona-sceptic movement is not only much larger, it is also more violent. Police on Saturday arrested some 300 people, mostly from in front of the Russian embassy where about 3,000 Reichsbürger had gathered and where officers were pelted with stones and bottles.

Most Germans remain supportive of the measures Berlin has taken to curb the pandemic. According to the “Politbarometer” poll, 60 per cent of Germans approve of the current measures, while 28 per cent think they should be toughened up. Only ten per cent say they are “exaggerated”.

The marchers on Saturday conceded they may be in a minority but that doesn’t deter them. “The anti-corona measures are an attack on our fundamental rights,” said Kerstin, the protester. “I see democracy in danger.”