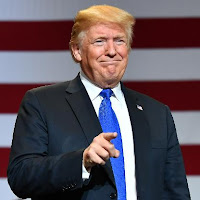 “I am very happy with over $100 Billion a year in Tariffs filling U.S. coffers,” tweeted President Trump this month. This money is “great for U.S., not good for China!”

But is this the case?

Benn Steil, a senior fellow and director of international economics at the Council on Foreign Relations, took a look at Trump’s claim.


Here is what he found.

China tariffs last year netted the government less than a tenth of what Trump claims.


Less than a tenth.

Second, those tariffs were not paid by China, but by American companies importing Chinese goods—much of them components needed to manufacture products in the United States, writes Steil.

And then things go completely haywire when trying to understand Trump tariff-related policy.

In 2018, according to Steil, the U.S. government committed to paying American farmers $9.6 billion to offset their losses from Chinese tariff retaliation. This is about $1 billion more than it took in all year from Trump’s China tariffs. Tariffs, therefore, ended up not just harming American companies and consumers, but costing the government money. More money left “U.S. coffers” to offset farm losses than came into them from U.S. importers. 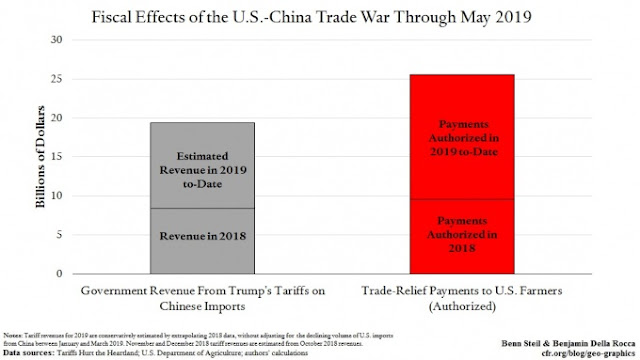 The Department of Agriculture just unveiled a new $16 billion bailout for farmers hit by the trade war. After just ten months of a trade war with China, subsidies to farmers are set to drain over $25 billion from “U.S. coffers” for damage done to date. China tariffs, meanwhile, have so far brought in just over $19 billion in tax payments from U.S. importers—$6 billion less than authorized farmer payments.


Bottom line: Trump is running his crazy tariff show that is costing us all in terms of higher prices, less product, and on top of it all, because he can’t lose the farm vote, he is using our tax money and debt proceeds to pay off the farmers who have been injured by Chinese retaliatory tariffs.


Trump can stick his tariff “winning” right where the colonoscope goes.