Bellway: One Of The Better British Builders For The Patient Investor (OTCMKTS:BLWYF)

Home Financial news Bellway: One Of The Better British Builders For The Patient Investor (OTCMKTS:BLWYF)
2020-07-082020-07-08By finanz.dk

The U.K. housing market has had a wobble lately and a lot of builders have been marked down, so it is an opportune time to assess the homebuilders and see which, if any, offer value.

Bellway faces challenges in the short term like all U.K. homebuilders, but if you want exposure to the sector and are willing to take a buy and hold approach for a few years, Bellway (OTC:BLWYF, OTCPK:BLWYY) is attractive.

Bellway is a well-run, disciplined, financially conservative homebuilder based in the northeast of England but active in both north and south.

The company sold nearly eleven thousand newbuilt homes last year, with around three quarters of those in the private space. The social housing space in the U.K., just under a quarter of the volume but less of the value for the builder’s revenues, is essentially a part of the market where certain constraints are in place and some government funding is available. Typically, it is building for local authorities or housing associations. Although rules apply (which is true of private housing too, in many aspects), social housing is still a profitable business, although the company does not break out its margins separately.

The company anticipates being able to ramp up to about 13,000 completions annually in coming years, which if achieved is a solid increase in volume, although the price mix means the revenue and profit increase may be less notable.

Pricing is quite mixed, reflecting the group’s geographic spread. It has been lowering its exposure to the pricier London market, now selling units at The Residence in London’s Battersea. 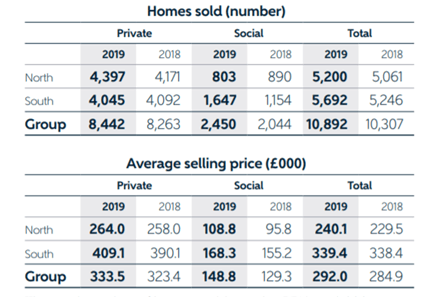 In its more recent half-year results, capturing the last period of time before COVID-19 affected British economic sentiment at all, results remained strong although there was some margin slippage. As the sales of the expensive Nine Elm development peter out, this will continue to be the case. However, with a pre-tax profit margin of 19.3% and growing sales, the company remains in good shape.

One of the things I like about Bellway is that it has found a successful formula and does not plan to deviate too much from it in coming years, except for doing less development in London, which anyway can be seen positively as a form of risk reduction. A land bank of 44,077 plots is roughly enough for another four years of activity. The U.K. government is looking to stimulate the economy, so may extend its incentives such as the Right to Buy programme, otherwise set to expire.

Although its net cash of £4.6 million sounds low, it has committed facilities of £545 million. It also believes it could be “highly cash generative” longer term should land and work in progress costs be curtailed, although that would only be if it had to, as obviously while it may raise short-term cash it would damage longer-term prospects.

The builder paid dividends through the financial crisis, albeit at a much-reduced level, and in recent years dividend growth was strong.

READ ALSO  Analysis: Green is the color of money for funds betting on a Biden win 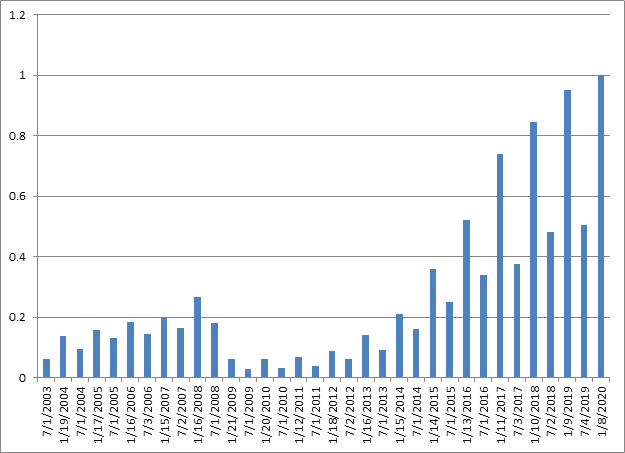 The dividend has been postponed due to COVID-19. It may be that the postponed interim dividend is yet paid later in the year. In the past five years, dividend cover has been between 2.9x and 3x, a conservative level.

Looking forward, a lot depends on whether house prices and profitability are sustained in coming years. Gathering economic clouds bode poorly for house prices in the U.K., although a demand crunch helps to support prices despite this. The company has also signaled in its annual report continued increase in input costs, which Brexit may exacerbate. So there is a fair chance that 2020 or even 2021 will not provide as good a result as 2019 and the conservative board will perhaps reflect that in the dividend payout level. Looking forward to, say, 2023, however, the 2019 dividends look possible, in which case today’s price would give a yield of around 6%. While a 6% yield today would be attractive, the prospect of a year or two on the sidelines for a possible 6% yield three years hence is not such an attractive proposition to me when other shares offer similar yields already.

A Fair Price for Bellway

Bellway’s shares are currently around 2,600p. This is already well above the 2000-2100p mark at which a number of directors purchased at the end of March.

Based on last year’s earnings, even 2,600p is a P/E of slightly less than 6. As explained above, I don’t think this year’s earnings will match last year’s and the same may well be true next year. Some years down the line, however, I’d expect earnings to match and then exceed that level, based on the company’s history of growth.

Conclusion: Bellway is a Long-Term Bargain

With an attractive yield and low P/E, if recent earnings are revisited after the likely turbulent next couple of years in the market, Bellway is a decent share to tuck away for those willing to wait three years for its valuation to improve again. I think there are better options in less cyclical parts of the market currently, so I am not in myself, but if you want long-term exposure to residential construction in the U.K., this is one of the better names to explore.