U.K. builder Bellway (OTC:BLWYF, OTCPK:BLWYY) has released its annual results. They show the resilience of the company and provide some grounds for optimism for its future performance, underlining the bull case for the name.

The Company Turned a Profit in a Tough Year

The challenges of lockdown and a subdued economy took their toll, with a 31% fall in revenue. However, the good news was that the company still managed to turn a profit for the year.

It is no surprise that profits fell. While there were additional costs related to COVID-19, more importantly, there was a period of roughly three months when house sales couldn’t go forward. So, for now, at least, the weaker results this year look like a result of the lockdown rather than the impact of an economic downturn.

The Final Dividend Has Been Reduced

The company announced its intention to resume dividend payments, which is positive for the investment case. However, it reduced the final year dividend to 50p, half of what it was last year.

The company emphasised that making a dividend payment enabled it to maintain its unbroken record of annual dividends and that it had done the same during the 2008-09 financial crisis. During that time, the cut was in fact much deeper, with total 2009 payouts just a fifth of what they had been in 2008, so, for now, at least, the 50% cut in final dividend level (or two-thirds cut if considering the total dividend for the year) does not look quite as bad by comparison. It is worth noting that the 2008 levels were not reached again until 2015, so based on that precedent, the dividend restoration does not bode for the dividend reaching prior levels again anytime soon.

The Company is Upbeat About the Outlook

The big question currently hanging over any U.K. homebuilding stock is where house prices are going. Bulls point to short-term tax incentives, a likely demand surge anticipating the end of a government subsidised purchase scheme, high demand in general and particularly post-lockdown and limited supply. The contrary case rests primarily on the expectation of a deep recession cutting demand and thus prices.

I am in the bear camp but recognise that, for now, evidence is a bit scant: mortgage rules are tightening, a point the company highlighted in its results, but overall, the market seems to be doing well post-lockdown, albeit with significant regional variations. While I continue to doubt the ability of house prices to be sustained while the economy gets increasingly more challenging, Bellway took the bull view and shared a rosy outlook. It described the start to trading in the current year as “encouragingly strong”. While overall reservations were up by 31% versus prior year in the nine weeks from 1st August, I expect that some of that reflects pent-up demand from lockdown, so pay more attention to the total forward order book. At 4th October, that stood at £1.87 billion, a 43% increase over the same period last year.

That is encouraging and suggests that the outlook is strong for the company. Whether or not that is correct partly depends on the macro level view one adopts of prospects for the U.K. homebuilding market. But it also depends on what view one takes about the company itself.

Why Bellway is a Good Choice in U.K. Housebuilding

I maintain my view that the company is one of the better run housebuilders traded on the London exchange.

The business model has proven its robustness, with demand high and a careful approach to land banking during lockdown which should help future profitability. While I remain nervous about a property price drop, Bellway’s midmarket position provides some insulation as it is not as exposed to the more financially precarious bottom end of the market, like competitors such as Taylor Wimpey (OTCPK:TWODF, OTCPK:TWODY). While pricing is generally holding up alright, there are some cracks, with the average selling price for private houses falling in the southern region. The company’s geographic spread across the U.K. continues to offer some overall insulation from drops in local markets, a perennial concern with builders whose portfolio is concentrated in London. 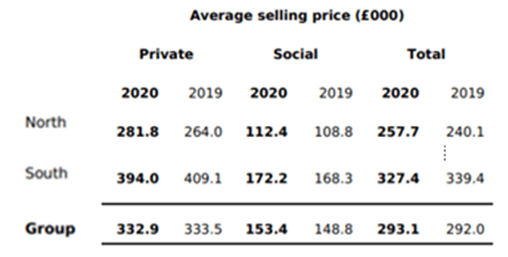 With all staff now returned to work and productivity at 85-90% of prior year levels, Bellway has proven its adaptability in a crisis and operational effectiveness.

Liquidity is good, highlighting once more the company’s cautious approach to finance, which is not always the case with housebuilders. The company ended the year, once again, without gearing. Its net cash position at that point was £1.4 million, and with good cash conversion, that improved after year end such that, by 4 October, it stood at £61.2 million. It operated “comfortably” within banking covenants in the year despite the circumstances. It has borrowing headway of £846.4 million.

The company remains committed to shareholder returns while maintaining a financially prudent approach. The dividend restoration and comments about its unbroken annual dividend record attest clearly to that: shareholders got some reward but not so much that the company’s finances were unduly stretched. So, for example, instead of belatedly paying an interim dividend, the company simply scrapped it altogether after its initial suspension.

Despite having climbed 45% from its March lows, the name continues to trade significantly below its pre-pandemic highs.

Conclusion: Bellway is a Good Bet on British Housing

Bellway’s results sound a positive note for the outlook in British housebuilding, though I take that with some degree of scepticism. What is not in doubt is that the builder has proven that it is well-run and adaptable, with a commitment to shareholders but not at the cost of financial prudence. For those reasons, I continue to see Bellway as a good option for a long-term buy and hold play in this sector.