Belarus protesters undeterred in face of threat of army response

Tens of thousands of Belarusians flooded into central Minsk on Sunday, as protests against strongman president Alexander Lukashenko continued for a 15th consecutive day despite threats of a renewed government crackdown.

The eastern European nation has been rocked by the biggest protests in its post-independence history since Mr Lukashenko, who has ruled with an iron grip since 1994, claimed victory over Svetlana Tikhanovskaya in a disputed presidential election two weeks ago.

Waving red and white flags, and directing chants such as “Resign!” and “Freedom!” at Mr Lukashenko, protesters streamed into Independence Square, despite a bigger police presence across the capital than in recent days.

Protests also took place in several other cities, including Vitebsk, Grodno and Gomel, according to local media.

Demonstrators were undeterred by a threat from defence minister Viktor Khrenin on Sunday to use the army against any who came near second world war memorials, one of which was the focus of a huge protest against Mr Lukashenko last weekend.

“I categorically warn you: in case of violation of order and peace in these places, you will deal not with the police, but with the army,” he said in a statement written by the ministry and largely in capital letters.

“We hope and trust that we will win,” said Eugen, a protester in Minsk. “Maybe not today, but in the near future things will change. We are all hoping for this.”

The two weeks of protests and strikes in towns and cities across the former Soviet state are the biggest challenge Mr Lukashenko has faced during his 26 years in power.

The 65-year-old former collective-farm boss initially responded with a brutal crackdown on his opponents, in which at least three people died, hundreds were injured and almost 7,000 detained, before backing off and releasing some prisoners.

The EU and US have refused to recognise Mr Lukashenko’s declaration of victory and called on Belarus to hold new elections.

Mr Lukashenko responded by making overt appeals for military support from Moscow, which recognised the election result and tepidly endorsed his attempts to quell the protests.

Vladimir Putin, Russian president, congratulated Mr Lukashenko after the vote and said he would uphold Moscow’s treaty obligations to Belarus in the event of a military invasion.

The Kremlin’s relations with its longest-running but most problematic ally have been strained after Mr Lukashenko accused Russia of trying to overthrow him during the election campaign, but Moscow remains wary of a pro-western administration replacing him.

Russian foreign minister Sergei Lavrov said on Sunday there were “clear and extremely important signs the situation was stabilising” but claimed that unnamed powers were attempting to “provoke bloodletting” in a “Ukrainian scenario”, according to Interfax.

Mr Lavrov said Belarus’ refusal to admit international election observers made it “very hard to convince anyone” that Mr Lukashenko had lost to Ms Tikhanovskaya. 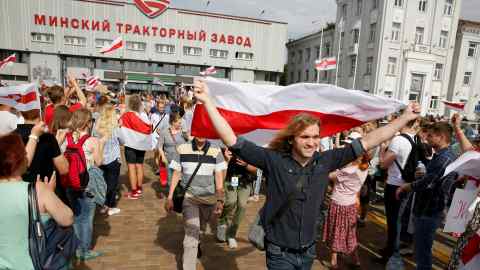 He repeated claims by Mr Lukashenko that the opposition wanted to join the EU and Nato and suppress Belarus’ Russian-speaking majority, citing a document from an outside group that Ms Tikhanovskaya linked to on her website but did not include in her election platform.

“It’s somewhat like Venezuela, when the legitimate president is declared a pariah and some other person who isn’t really recognised by the population is declared the president,” Mr Lavrov said.

Instead, Mr Lavrov said, Mr Lukashenko’s calls this week for constitutional reforms, after which the Belarusian president said he would cede power, were a “highly promising [ . . . ] dialogue”.

In recent days, however, Mr Lukashenko’s regime has again ratcheted up the pressure on his opponents. Prosecutors have opened a criminal probe into a council set up by opposition leaders, and on Friday interrogated two of them.

Mr Lukashenko has also claimed foreign powers are trying to intervene in Belarus, and ordered the country’s army to move troops to the border with Poland and Lithuania, both of which are members of Nato.

On Saturday, he visited military units conducting drills near Grodno in the west of the country and claimed his opponents were trying to stage “colour revolutions” in Belarus like those that ousted leaders in Ukraine and Georgia.

“Military support is evident — the movement of Nato troops to the borders,” he said during his visit, according to Belta, the state-run press agency, claiming his opponents aimed to install a new president who would call on western powers for support.

“They then bring in troops — and you can put an end to Belarus,” he said.

Nato has denied building up forces near the Belarus border and insisted that its presence in eastern Europe is purely defensive.