Maria Kolesnikova, one of Belarus’s main opposition leaders, vanished in Minsk on Monday morning, as the regime of autocratic leader Alexander Lukashenko battles to quell protests against his disputed re-election.

Ms Kolesnikova was the last of the three women who spearheaded the campaign against Mr Lukashenko in last month’s presidential election to remain in Belarus, after Svetlana Tikhanovskaya and Veronika Tsepkalo fled the country under pressure from the security services.

Maksim Znak, a lawyer from the opposition Coordination Council, of which Ms Kolesnikova is also a member, told the Financial Times that she had “most probably” been detained.

“There is no official information. She has disappeared,” he added.

According to a witness cited by the independent Belarusian website Tut.by, masked men bundled Ms Kolesnikova into a minivan in central Minsk, before driving her away to an unknown destination.

“I heard the sound of a telephone falling on asphalt, some sort of a scuffle, turned round, and saw that people in masks and civilian clothes were pushing Maria into this minibus,” Anastasia, the witness, told Tut.by. “Her phone flew out, one of these people picked up the phone, jumped into the minibus, and they drove off.”

Ms Kolesnikova’s disappearance comes as Mr Lukashenko scrambles to contain the huge street protests that erupted after he claimed a landslide victory in the deeply flawed election, and which have become the most serious challenge to his authority during his 26 years in power.

Tens of thousands of protesters took to the streets across the country on Sunday, for the fourth weekend in a row, to call for Mr Lukashenko’s departure and the holding of fresh, free and fair elections.

READ ALSO  SE: WHO: Must Learn to Live With Covid-19 as a Constant Threat

The interior ministry said that 633 people were detained for taking part in unsanctioned protests — the highest number since a brutal crackdown in the immediate aftermath of the election on August 9.

As well as Ms Kolesnikova, two other opposition figures, Anton Rodnenkov and Ivan Kravtsov, were reported missing on Monday morning. 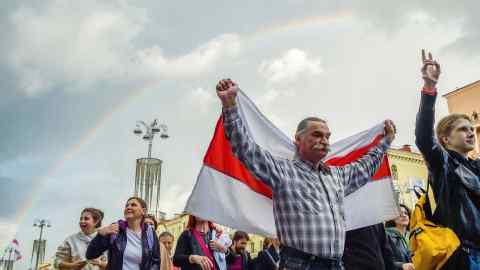 The campaign team of Viktor Babariko — the opposition presidential candidate for whom Ms Kolesnikova worked before joining forces with Ms Tikhanovskaya after he was arrested — said that it had no information about their whereabouts, but that lawyers were working on the matter.

Ms Tikhanovskaya said that the apparent detentions of Ms Kolesnikova and the two other opposition activists showed that the Belarusian authorities were “engaged in terror”.

“You cannot describe it in any other way. The abductions . . . are an attempt to disrupt the work of the Coordination Council and intimidate its members,” she said.

“The authorities are wrong if they think it will stop us. The more they [try to] intimidate, the more people will go out on to the streets. We will continue to fight, we will seek the release of all prisoners and the holding of new, fair elections.”

Lithuania’s foreign minister, Linas Linkevicius, who has been an outspoken critic of Mr Lukashenko, and whose country has given refuge to Ms Tikhanovskaya, demanded that Ms Kolesnikova be released.

“Instead of talking to the people of Belarus, the outgoing leadership is trying cynically eliminate one by one [sic],” he wrote on Twitter.

“The kidnapping of [Maria] Kalesnikava in downtown of Minsk is a disgrace. Stalinist NKVD methods are being applied in 21st century’s Europe. She must be released immediately.”