Belarusian opposition leader Maria Kolesnikova was detained at the border with Ukraine, Belarusian authorities said on Tuesday, the day after she went missing in the capital Minsk.

Ms Kolesnikova is the last of the trio of women who challenged strongman Alexander Lukashenko in August’s presidential election still in Belarus, after Svetlana Tikhanovskaya and Veronika Tsepkalo fled the country under pressure from the security services.

Ms Kolesnikova and two other opposition figures, Anton Rodnenkov and Ivan Kravtsov, all vanished on Monday, as Mr Lukashenko battled to stifle the huge protests that have rocked the country since he claimed a landslide victory in a deeply flawed election on August 9.

Belarusian media reported that Ms Kolesnikova had been grabbed off the street in central Minsk on Monday morning by masked men in civilian clothes and bundled into a van, before being driven away.

Anton Bychkovsky, a spokesman for Belarus’s border guard agency, claimed that their car “rapidly accelerated” while approaching the border before the men “basically threw [Ms Kolesnkikova] out of it and continued towards Ukraine”. 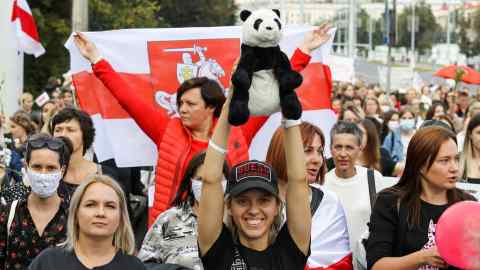 However, the Interfax news agency reported that Ms Kolesnikova had ripped up her passport to prevent herself being deported.

Anton Gerashchenko, Ukraine’s deputy interior minister, wrote on Facebook that the three activists were “forcibly deported from their home country in order to compromise the Belarusian opposition — to make it look like the leaders of the opposition were abandoning the hundreds of thousands of protesters against the Lukashenko regime to fate and fleeing to comfortable Ukraine”.

“They didn’t manage to deport Maria Kolesnikova from Belarus because this brave woman did something to stop herself from crossing the border,” Mr Gerashchenko added. “Alexander Lukashenko personally bears all responsibility for her life and wellbeing.”

Ukraine’s border guards said Mr Rodnenkov and Mr Kravtsov were in the process of entering the country but that Ms Kolesnikova had not appeared at the border.

Maxim Znak and Pavel Latushko, from Belarus’s opposition Coordination Council, of which Ms Kolesnikova is also a member, both told the FT that there had so far been no contact with any of the three opposition figures.

Ms Tikhanovskaya called on Belarus to free the activists. “You can’t take the people hostage. By kidnapping people in broad daylight, Lukashenko is demonstrating his weakness and fear,” she said in a statement on messaging app Telegram.

The apparent attempt to expel Ms Kolesnikova from Belarus is the latest effort by Mr Lukashenko to ratchet up the pressure on the opposition movement that has become the most serious challenge he has faced during his 26 years in power.

In the immediate aftermath of last month’s election, he cracked down on his opponents, with riot police using rubber bullets, beatings, flash-bang grenades and water cannons to quell protests.

However, after three days of action by the security forces, during which at least four people died, almost 7,000 were detained and hundreds were injured, Mr Lukashenko’s regime has since focused on harassing opposition leaders.

Belarusian authorities have interrogated and detained members of the Coordination Council, as well as targeting the leaders of strike committees at state-owned companies.

Mr Latushko said that the treatment of Ms Kolesnikova was a sign that Mr Lukashenko’s regime did not want to have “any dialogue with Belarusian society”.

Previous PostThe Implausibility Of The Lower Bound Escape ClauseNext PostStarbucks adds plant-based items to Asian menus from Beyond Meat, others