Belarus opposition leader Svetlana Tikhanovskaya has called on the EU to step up sanctions against the regime of strongman Alexander Lukashenko, who has faced months of protests since claiming victory in August’s deeply flawed presidential election.

Ms Tikhanovskaya, who was forced to flee the country after disputing the result, welcomed the action taken by the EU last month when it imposed sanctions on about 40 individuals linked to the regime in Belarus. But she said Brussels needed to go further and target “people and companies supporting Lukashenko”.

In an interview with the Financial Times, Ms Tikhanovskaya said that although Europe had made clear its desire to help, it was sometimes so slow to act.

“This help is needed now. And if European countries, and all the countries supporting our movement, could move faster in their decisions, that would be wonderful.”

Ms Tikhanovskaya, a political newcomer who was Mr Lukashenko’s main rival for the presidency, said the Belarusian opposition had given the EU a list of people involved in violence after the election.

She also called for sanctions to be imposed on the Belarusian Olympic Committee, which is headed by Mr Lukashenko. “That would be a personal blow for him,” she said.

Speaking from Lithuania, where she has been based since leaving her homeland under pressure from the security services, Ms Tikhanovskaya also floated the idea of visa-free travel for Belarusians in the EU.

“We will be discussing this item with Europe,” she said. “[If] people can leave the country without problems, the regime will not have so much power over them. Belarusians will feel freer.”

Since Mr Lukashenko claimed victory in August, he has been confronted by repeated street protests drawing tens of thousands of people in what has become the most serious and sustained challenge to his 26-year autocratic rule.

A strike called by Ms Tikhanovskaya last week failed to ignite, but the protests show no sign of petering out. Last weekend 200,000 people flooded into the Belarus capital, Minsk, for one of the biggest demonstrations since the election.

In an effort to regain control, Mr Lukashenko has tried a variety of approaches. In the immediate aftermath of the poll, he ordered a savage crackdown. But when the violence appeared to galvanise protesters, his regime focused instead on harassing opposition leaders and strike organisers. 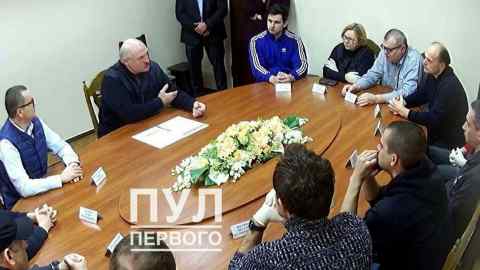 However, as the protests have continued into a third month, his government has once again adopted more brutal tactics, with officials stepping up detentions and warning they could use live rounds on demonstrators. On Friday Mr Lukashenko threatened to leave protesters “without hands” if they touched security personnel.

Last week the 66-year-old autocrat reshuffled government positions and appointed officials from the country’s security apparatus to supervise Brest and Grodno, cities in western Belarus, which had held frequent protests.

Ms Tikhanovskaya said she thought the moves were “signs of panic”.

“Grodno and Brest are more active, they are closer to Europe, they are more free, I would say spiritually, so he sent people from the siloviki to oversee the situation,” she said, adding that the reshuffle could also be an effort by Mr Lukashenko to tighten his grip on his inner circle.

“I’m sure that now he is afraid of all the people around him, of his closest circle, he is afraid to be betrayed.”

As the crisis in Belarus has dragged on, there has been speculation about splits in the opposition. Pavel Latushko, a member of the Coordination Council set up by Ms Tikhanovskaya to negotiate a peaceful transition of power, recently said he was setting up another opposition structure.

However, Ms Tikhanovskaya insisted that the opposition was “as united as never before”. She said she was supportive of Mr Latushko’s plans, and also that she remained in contact with other prominent opposition figures, such as Veronika Tsepkalo and the team of Viktor Babariko, a banker who was regarded as one of the biggest threats to Mr Lukashenko, before he was jailed in June.

“We co-ordinate our messages, our movements . . . there is no crack [in the opposition],” she said. “If [there is some] propaganda claiming that we have some problems: No, we don’t.”