Trade war woes and economic concerns have kept a lid on oil prices this week, despite bullish geopolitical news in the Middle East. 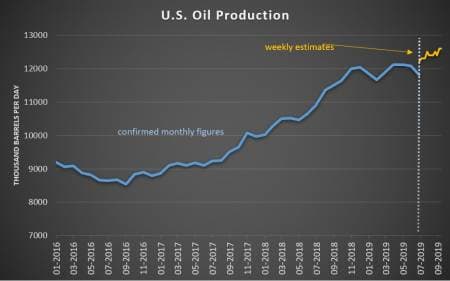 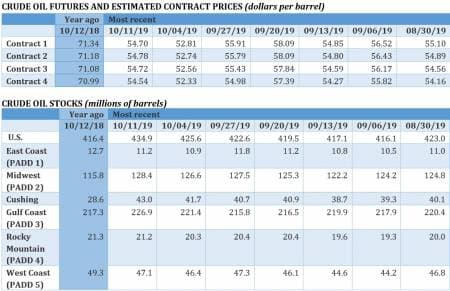 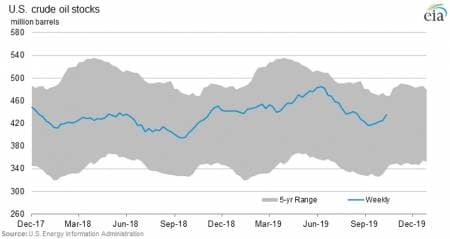 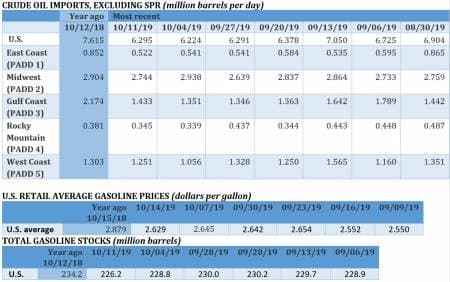 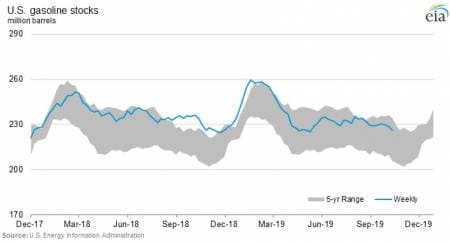 Oil prices were down on Friday morning as the global economy continues to struggle with the realities of the U.S.-China trade war and crude inventories continue to build.

Saudi Aramco IPO to be delayed. Just days before the official launch of the IPO was to be announced, it now appears that the Saudi Aramco public offering will be delayed again. Bloomberg reports that there is a gap between the valuation that Aramco wants and the one that banks are coming up with. There is also a lack of clarity on some aspects of the company, complicating the calculus for the banks involved. It’s unclear when the offering will go forward, but Bloomberg said it would be delayed until at least December or January, instead of November.

Analysts see deeper OPEC+ cuts in December. As a result of weak demand a growing supply, and the growing likelihood of a glut in 2020, many analysts are betting that OPEC+ undertakes deeper cuts when they meet in Vienna in December. “If by December there are clear signs of economic weakness, then a further deepening by a minimum of 500,000 barrels a day would be highly likely,” Citigroup’s Ed Morse said.

Related: $300 Oil: What If The Attacks In Saudi Arabia Had Destroyed Production?

Oilfield services look to clean energy. A growing number of oilfield services companies are pursuing clean energy projects. “Almost 100 per cent of our tech development goes in the direction of the post-transition business,” Stefano Cao, CEO of Saipem, an Italian engineering group, told the FT. “The collapse of the oil price [in 2014] was an awakening to a new world.” In August, TechnipFMC (NYSE: FTI) announced plans to spin off its LNG business so that it can focus on clean energy. The current downturn in the market is likely accelerating this trend, analysts said.

Citgo’s fate in the balance as debt payment looms. Citgo has a $913 debt payment due at the end of the month, and creditors could seize parts of the company if it does not pay. But the company is stuck in the middle of U.S. sanctions, and the geopolitical battle over Venezuela.

Colorado will scrutinize 2,000-foot setbacks. A highly-anticipated study found that shale drilling operations pose health risks to people within 2,000 feet of drill sites in Colorado. The study found that the risk was highest during the flowback stage, when water and chemicals return to the surface. State regulators said they would apply additional scrutiny to drilling permits that are sited within 2,000 feet. Current law only requires setback distance of 500 feet, or 1,000 feet for high-occupancy buildings.

More cuts to shale outlook. Several U.S. shale drillers saw their credit outlooks cut by analysts in the past week. Low oil prices and a struggle with profitability has soured investor sentiment.

Exxon to go on trial. After more than three years, ExxonMobil (NYSE: XOM) will finally go to trial next week over accusations that it misled shareholders about its financial risks from climate change. The odds are steep for the New York Attorney General bringing the case, but if Exxon loses the fallout could be significant. “If the state wins and especially if it obtains a large award, disclosures may become even more careful and even more cases may be brought,” Michael Gerrard, director of the Sabin Center for Climate Change Law at Columbia University, told E&E News.

U.S.’ green economy worth $1.3 trillion. A new study estimates that America’s “green economy” supports 9.5 million jobs, or about 4 percent of the U.S. workforce, and generates $1.3 trillion in annual revenue, or about 7 percent of U.S. GDP. “Don’t listen to the political rhetoric,” Mark Maslin, a professor of geography and one of the study’s authors, told Bloomberg. “Just look at the data and be hard-nosed about it, and say, ‘Okay, if we’re going to support the economy and make it grow and have lots of employment, this is where I need to invest.’”

Ethanol prices fall on EPA plan. EPA released details on its “fix” for ethanol, and prices for ethanol credits sank after the Trump administration seemed to deliver a disappointing proposal. Farm groups were angered by the “broken promise.” Related: Is This The End Of The Lithium-Ion Battery?

Soaring shipping costs cut into U.S. exports. Bloomberg reports that due to the global spike in shipping costs – following U.S. sanctions on Chinese shipping giants – the number of deals on oil cargoes from the U.S. Gulf Coast is dwindling. “The Port of Corpus Christi is preparing for a slower U.S. crude export growth rate from its site in November because of the surge in freight rates from the Cosco sanctions,“ said Sean Strawbridge, the chief executive officer of the Port of Corpus Christi.

More coal layoffs. U.S. coal production is set to slide by 10 percent this year, which will likely lead to more job cuts.

Exxon’s strong Permian results. According to Wood Mackenzie, ExxonMobil (NYSE: XOM) is posting strong results in the Permian basin, including on decline rates, parent-child well interference, and cost savings. The consultancy cautions that it is still early, but Exxon is on its way to achieving its lofty production goals in the Permian.