After spending the first four days of the week under pressure due to concerns that a weakening U.S. economy would lead to lower demand, U.S. West Texas Intermediate crude oil futures are trading higher on Friday after the release of a report showing a stronger-than-expected U.S. labor market. Crude oil is still expected to close lower for the week, but the news has somewhat eased the growing bearish tone.

Despite the decent short-covering rally on Friday, the news is not likely to offset the negative news that had been piling up all week, including worries about rising U.S. supply, concerns over a weakening Chinese economy, renewed tensions over U.S.-China trade relations, and reservations over whether OPEC and its allies would announce deeper output cuts.

Crude oil inventories rose by 5.7 million barrels in the week to October 25, the U.S. Energy Information Administration (EIA) said on Wednesday, compared with analyst expectations for an increase of 494,000 barrels.

On Tuesday, the American Petroleum Institute (API) reported a decline of 708,000 barrels, raising hopes that official figures would also show a fall.

However, gasoline and distillate inventories extended their declines even as refiners ramped up production, it said.

China’s manufacturing sector continued to dwell in the doldrums in October, with sentiment among factory operators remaining in negative territory for the sixth month in row, the South China Morning Post reported on Thursday.

The manufacturing purchasing managers’ index (PMI), released by the National Bureau of Statistics (NBS) on Thursday, stood at 49.3 in October, down from 49.8 in September and below the expectation in a Bloomberg survey of analysts for an unchanged reading. The October figure was the lowest since hitting 49.2 in February.

Bloomberg News, citing unnamed sources, said that Chinese officials have been casting doubt over the possibility of a long-term trade deal with the U.S., despite the two sides closing in on an initial “phase one” accord. This headline is reviving concerns over future demand growth.

Some of the selling pressure earlier in the week may have been caused by conflicting reports that Saudi Arabia is willing to cut deeper at the December OPEC meeting, while Russia continues to suggest indirectly that it might not be interested in doing more.

This was probably the most important event of the week in my opinion because this story has been driving prices higher for two weeks. If you recall, OPEC and its allies, led by Saudi Arabia, said earlier in the month that it would consider lowering output quotas to reflect the weakening global economy and anticipated drop in demand.

The decision is expected to be made when all parties meet on December 5-6, however, without Russia’s support, the chances of reaching an agreement have dropped considerably. 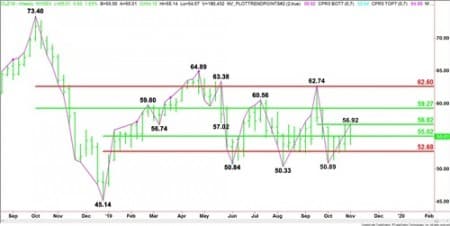 The main trend is up according to the daily swing chart, however, momentum has been trending lower since the week-ending September 20.

A trade through $62.74 will reaffirm the uptrend. A move through $50.89 will change the main trend to down.

The short-term range is $62.74 to $50.89. Its 50% level or pivot at $56.82 is acting like resistance. This level essentially stopped the rally this week at $56.92. This level also appears to be controlling the near-term direction of the market after having stopped a rally this week and the prior week.

Based on this week’s price action, the direction of the December WTI crude oil futures contract next week is likely to be determined by trader reaction to the minor 50% level at $55.02.

A sustained move under $55.02 will indicate the presence of sellers. If this move generates enough downside momentum then look for the selling pressure to extend into the minor 61.8% level at $52.68. Buyers could come in on a test of this level.

If $52.68 fails as support then look for a potential test of a pair of main bottoms at $50.89 and $50.33. The latter is a potential trigger point for an acceleration to the downside with $45.14 a potential near-term target.

A sustained move over $55.02 will signal the presence of buyers. If this move creates enough upside momentum then look for the rally to possibly extend into the short-term 50% level at $56.82, followed by this week’s high at $56.92.

The weekly chart indicates the trigger point for an acceleration to the upside is this week’s high at $56.92. If buyers take out this level with rising volume and support is established at $56.82 then look for a possible surge to the upside with the next target the main 50% level at $59.27.

We’re pretty confident that $55.02 to $52.68 is support, and $56.92 is the trigger point for an acceleration to the upside. However, we don’t know the event that will help put in a bottom and/or trigger a breakout to the upside.

We suspect the next major move will be news driven. We also think that any positive developments from OPEC regarding deeper production cuts will underpin prices, and the announcement of a partial trade deal between the United States and China will be the catalyst that triggers the breakout.

Remember that the trade deal can work two ways. If it gets reached then the news will be bullish. If trade talks fall apart then it will be bearish.