Beam Therapeutics (BEAM) is a preclinical stage biopharma with a $3.3B market cap and a recent IPO whose chart looks like this:

We have been observing, in recent years, these sorts of impossible valuations in certain biopharma with cutting edge science even before they have any products. First, there were the CAR-T companies – these companies became multi-billion dollar behemoths even before they started in the clinic. Some of them did very well – Juno got bought out by Bristol-Myers Squibb (BMY), Kite was purchased by Gilead (GILD). Some didn’t do so well – nobody purchased bluebird bio (BLUE), and Celyad (CYAD) simply collapsed. I have covered most of these companies in their time, and now is not the time to go into those details. Suffice it to say, predicting value of scientific development could be one of the most unscientific pursuits you can imagine and involves a lot of gamble.

Then we had the CRISPR companies – these have just entered the clinic, and yet they are valued in billions of dollars. The top dog is CRISPR Therapeutics (NASDAQ:CRSP). I just wrote about Editas (EDIT), and there are others.

Beam Therapeutics follows in those footsteps; indeed, it was co-founded by David Liu, the same Broad Institute and Harvard biochemist who also founded Editas. Beam initially started with “base editing,” the simplest form of gene editing that changes a single DNA letter. This can potentially resolve thousands of inherited diseases, but can also trigger harmful responses. Beam has also acquired exclusive rights to a technology called “prime editing,” a technology that can delete “long lengths of disease-causing DNA or insert DNA to repair dangerous mutations.”

In the Nature paper which announced the new technology, the authors said:

“Prime editing shows higher or similar efficiency and fewer byproducts than homology-directed repair, has complementary strengths and weaknesses compared to base editing, and induces much lower off-target editing than Cas9 nuclease at known Cas9 off-target sites. Prime editing substantially expands the scope and capabilities of genome editing, and in principle could correct up to 89% of known genetic variants associated with human diseases.”

David Liu founded another company called Prime Medicines and made it the holder of the IP of this technology, then, in October last year, he outlicensed the Prime Medicines IP to Beam, which had begun life as a base editing company. When asked, in an interview last year over at STATNEWS, about this complex relation between the companies, David Liu said:

“I believe patients will be best served by having multiple teams of people dedicated to transitioning each new technology into human therapeutics. The relationship between Beam Therapeutics and Prime Medicine was designed to maximize patients’ interests, so that as many patients as possible can benefit from base editing or prime editing technology. This cooperative arrangement also minimizes the unnecessary expenditure of time and resources on critical technologies such as delivery and manufacturing that are needed to bring any editing technology to patients. It also ensures that when base editing and prime editing both offer potential solutions to editing a disease target, both technologies can be explored non-competitively to maximize patient benefit.”

However that may be, now we can understand why Beam is being valued this way. Beam is next generation technology to a technology that is already valued very highly, although it has still not been proven in late stage trials, the gold standard of all medical hypotheses.

CRISPR investors who want to locate the who’s who of CRISPR scientists could use this list: 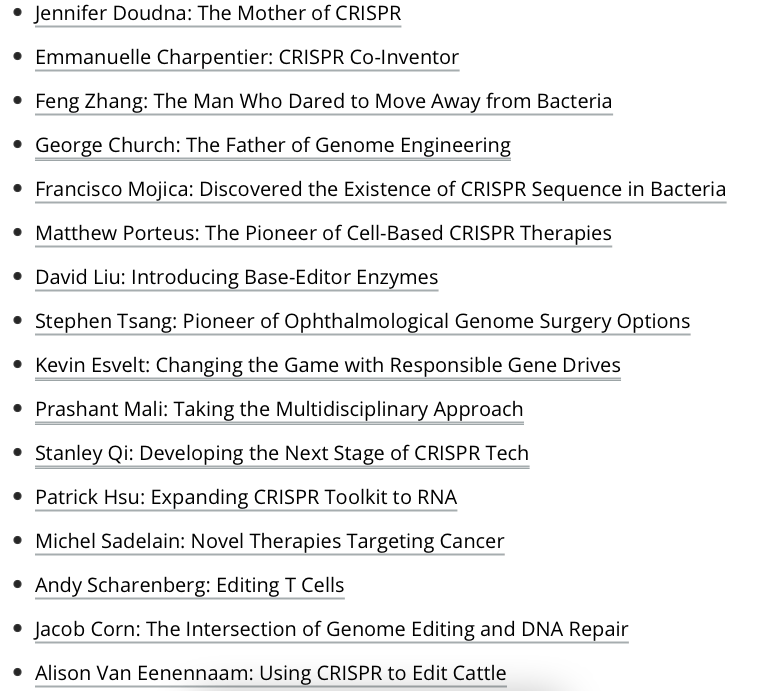 Although the list does not describe Liu’s prime editing tech, it still gives a nice overview of the scientists involved.

Beam Therapeutics says that its editing technology is a major advance over currently used technologies.

“Existing gene editing technologies, such as CRISPR, Zinc Fingers, Arcuses, and TAL Nucleases, operate by creating a targeted double-stranded break in the DNA, and then rely on cellular mechanisms to complete the editing process. Such approaches can be effective in the disruption of gene expression; however, they lack control of the editing outcome, have low efficiency of precise gene correction, and can result in unwanted DNA modifications.

Our proprietary base editing technology potentially enables an entirely new class of precision genetic medicines that targets a single base in the genome without making a double-stranded break in the DNA. This approach uses a chemical reaction designed to create precise, predictable and efficient genetic outcomes at the targeted sequence, which we believe will dramatically increase the impact of gene editing for a broad range of therapeutic applications.”

These 12 base editing programs are divided into three sets: “electroporation for efficient delivery to blood cells and immune cells ex vivo; lipid nanoparticles, or LNPs, for non-viral in vivo delivery to the liver and potentially other organs in the future; and adeno-associated viral vectors, or AAV, for viral delivery to the eye and central nervous system, or CNS.”

The company says that it has “achieved proof-of-concept in vivo with long-term engraftment of ex vivo base edited human CD34 cells in mice for our HPFH program, and we have demonstrated base editing of cells in vitro at therapeutically relevant levels for the majority of our remaining programs. We have also successfully demonstrated feasibility of base editing with each of our three delivery modalities in relevant cell types for electroporation and AAV and in vivo in mice for LNP. Our portfolio includes a novel approach to elevating levels of fetal hemoglobin for sickle cell disease and beta-thalassemia, as well as direct correction of the sickle cell mutation itself; engineered allogeneic CAR-T products through multiplex editing of T cells from healthy donors, initially for pediatric T-cell Acute Lymphoblastic Leukemia, or T-ALL, and pediatric Acute Myeloid Leukemia, or AML; precise correction of key point mutations in two severe liver disorders, Alpha-1 Antitrypsin Deficiency and Glycogen Storage Disorder 1a; and a precise gene correction approach to treating the most prevalent point mutation causing Stargardt disease, a progressive ocular disorder for which there are no approved treatments.”

The most advanced program is sickle cell disease and Beta-thalassemia in the Beam-101 program. Sickle cell disease is the most common inherited blood disorder affecting Americans. Hematopoietic Stem Cell Transplant, or HSCT, is the only curative therapy; however, it has a host of risks, including Graft-versus-Host Disease, or GvHD, making it unsuitable for many patients. Beta-thalassemia is a rarer disease, and HSCT is also the only curative therapy available.

There is a lentiviral gene therapy available in some countries for Beta-thalassemia; however, there is significant unmet need.

Beam has a market cap of $3.3B and is trading at 52-highs of around $60. They have a cash balance of $202M as of the current reported quarter. It is difficult to characterize annual burn at this time because the company has just recently IPO-ed. However, they seem to have enough cash for about 2 years, given that they spent around $20M in the previous quarter. As they enter clinical stages, that will change. So, expect a lot of dilution in the next few years.

This is an introductory article on a company that has just started out, despite being launched 3 years ago. They are yet to begin clinical trials. However, they are valued very highly for a new company because of their intellectual property and cutting edge technology. We plan to keep covering this company as things develop.

Thanks for reading. At the Total Pharma Tracker, we offer the following:-

Our Android app and website features a set of tools for DIY investors, including a work-in-progress software where you can enter any ticker and get extensive curated research material.

For investors requiring hands-on support, our in-house experts go through our tools and find the best investible stocks, complete with buy/sell strategies and alerts.

Sign up now for our free trial, request access to our tools, and find out, at no cost to you, what we can do for you.