Shares in Germany’s Bayer fell to their lowest level in more than six months on Thursday after the group warned that the coronavirus pandemic would hit profits harder than expected, particularly at its ill-fated Monsanto acquisition.

“We expect the Covid-19 situation to particularly weigh on our crop science business in the second half of 2020 and then throughout fiscal 2021,” chief executive Werner Baumann told investors.

He added that Bayer would take a several billion euro writedown of assets in its agricultural business, most of which was bought from Monsanto for $63bn in 2018.

The news prompted the company’s stock to fall more than 10 per cent to €47.80 by late morning in Frankfurt.

With the acquisition of Monsanto, Bayer secured a market leading position in the agricultural chemicals sector, but the company was soon hit by a wave of lawsuits over the alleged carcinogenic properties of the US company’s key product, the weedkiller Roundup.

In August, Bayer reported a net loss of €9.5bn for the second quarter of the year, largely due to setting aside €12.5bn to settle a slew of legal challenges primarily related to Roundup.

It warned that the “situation is unlikely to improve considerably in the near-term”.

UBS analysts wrote on Thursday: “The extent of the additional pressure is a surprise to us. Relative to consensus expectation, the 2021 outlook is €2bn-€3bn lower on sales with the majority of the shortfall coming from crop science. 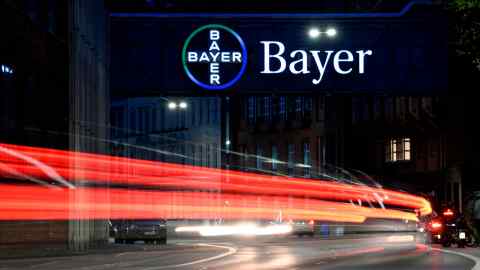 “We currently model a slight decline for the division but Bayer’s guidance implies a 10 to 15 per cent decline.”

In order to meet its long-term profitability targets, the Leverkusen-based group said it would cut €1.5bn of costs in 2024, on top of the already announced €2.6bn from 2022, and potentially cut more jobs.

Bayer did not adjust its dividend policy, committing to return between 30 and 40 per cent of earnings to shareholders, although the company warned that its payouts would probably be in the lower end of that range.

“They will help mitigate the impact of Covid-19 on our business.”

Earlier this month, Bayer announced that its supervisory board had extended Mr Baumann’s tenure at the top of the company until 2024, despite his overseeing of one of the most disastrous mergers in modern corporate history.