Mr Diller revealed on Monday that he had accumulated a 12 per cent stake in MGM Resorts in recent months, believing that an established casino operator would be able to transform itself with a substantial online business.

MGM Resorts operates Las Vegas casino resorts such as Aria, The Bellagio and Mirage. While admitting that online gaming only makes up a small portion of the company’s revenues now, Mr Diller said there was a “digital first opportunity within MGM Resorts’ already impressive offline businesses”.

He added: “With our experience we hope we can strongly contribute to the growth of online gaming.”

MGM Resorts shares were up more than 12 per cent at midday in New York on the news of the veteran media investor’s stake.

[IAG has] $3.9bn of cash, no debt and its opportunistic zeal intact

Mr Diller, 78, launched the Fox television network for Rupert Murdoch and had a long if occasionally tortuous business relationship with John Malone’s Liberty Media cable empire, before focusing most of his investment activity in recent years on ecommerce and digital media companies.

He was an early investor in the online dating industry, buying Match Group in 1999 and eventually taking it public in 2015 as newer apps like Tinder soared in popularity.

This year Mr Diller spun off Match Group from IAC, his media holdings group. On Monday he said this separation left IAC with “$3.9bn of cash, no debt and its opportunistic zeal intact”.

In a letter to IAC’s investors explaining his decision, Mr Diller wrote that he had wanted to move into online gaming for some time, but a patchwork of US state regulations had made it impossible for an internet-only business.

“To operate true sports betting and digital gaming, a provider is currently required to partner with a local casino operator,” he wrote. “And while we believe that regulatory environments generally catch up with consumer demand, it’s taken quite a while in this category, so we found one of the leading players operating in 7 going on 11 states by the end of 2020: MGM.” 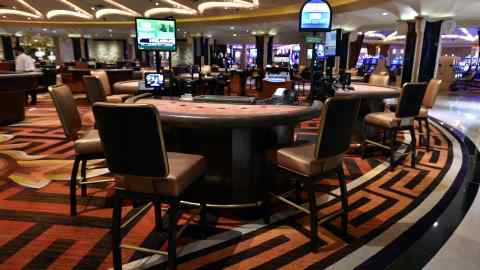 MGM Resorts, like other hospitality operators, has been battered by the pandemic as lockdowns forced it to close its casinos. The company warned last month that the travel restrictions and health protocols from the pandemic will continue to “heavily impact” its business, as it reported a net loss of $857m in the second quarter.

Shares in MGM Resorts have dropped 35 per cent this year, while the S&P 500 index is flat.

Even before the coronavirus crisis, MGM Resorts had been pressured by investors to sell its casino assets. In the past year the company agreed to sell the Bellagio and the flagship MGM Grand properties to Blackstone, although it continues to operate them under contract.

The company in March launched BetMGM, a sports betting platform and mobile app, at its Las Vegas properties.