Barack Obama called for sweeping reform to US voting laws during an eulogy at the funeral of civil rights activist and veteran congressman John Lewis, in one of his biggest political interventions since leaving the White House.

“I know this is a celebration of John’s life. There are some who might say we shouldn’t dwell on such things. But that is why I’m talking about them,” Mr Obama, the former Democratic president, said at Lewis’s funeral service in Atlanta on Thursday.

Mr Obama’s comments came just hours after President Donald Trump suggested November’s US presidential election should be delayed, repeating unsubstantiated claims that the vote would be marred by fraud due to more mail-in ballots. Republican lawmakers have swiftly rejected the idea.

Mr Trump did not attend Lewis’s funeral. Mr Obama was joined at the event by former presidents George W Bush, a Republican, and Democrat Bill Clinton. The only other living former US president, Democrat Jimmy Carter, who is 95, sent a letter that was read at the service.

Lewis first rose to national prominence more than half a century ago, in August 1963 during the March on Washington to advocate for the civil and economic rights of African Americans. He died earlier this month at the age of 80.

Lewis was arrested some 40 times while protesting against segregation, and subjected to several life-threatening beatings, including notably on “Bloody Sunday” in March 1965 in Selma, Alabama. He later served as a Democrat in the US House of Representatives for more than 30 years, until his death.

His body lay in state at the US Capitol in Washington earlier this week before Thursday’s funeral at the historic Ebenezer Baptist Church in Atlanta, where Martin Luther King Jr was a pastor in the 1960s.

On Thursday morning, The New York Times published an essay written by Lewis shortly before his death. The civil rights activist said he was “inspired” by protests following the killing of George Floyd, writing: “You filled me with hope about the next chapter of the great American story when you used your power to make a difference in our society.”

Mr Obama was the final speaker at a lengthy service that included eulogies from Lewis’s family, friends and colleagues, including Mr Bush and Mr Clinton, as well as Nancy Pelosi, Democratic speaker of the House.

The former president has largely shied away from political statements since leaving office, though he has returned to the public eye in recent months in support of Joe Biden, his former vice-president, who will be Mr Trump’s Democratic opponent at the ballot box.

Mr Obama offered some of his most pointed criticisms of the incumbent to date on Thursday, lashing out at the Trump administration even if he did not directly name the president.

“Bull Connor may be gone, but today we witness with our own eyes police officers kneeling on the necks of black Americans. George Wallace may be gone, but we can witness our federal government sending agents to use tear gas and batons against peaceful demonstrators,” Mr Obama said, referencing both staunch segregationists of the past and recent government actions following Floyd’s killing.

The former president added: “We may no longer have to guess the number of jelly beans in a jar in order to cast a ballot, but even as we sit here, there are those in power who are darnedest to discourage people from voting by closing polling locations, and targeting minorities and students with restrictive ID laws, and attacking our voting rights with surgical precision, even undermining the postal service in the run-up to an election that is going to be dependent on mail-in ballots so people don’t get sick.” 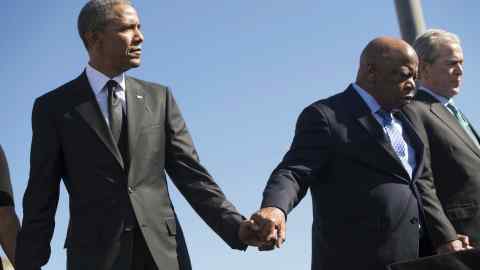 Mr Obama called for a new “John Lewis Voting Rights Act” that he said should include a provision “making sure every American is automatically registered to vote, including former inmates, who have earned their second chance”.

Voting access for former felons has proved highly contentious. Earlier this month, the US Supreme Court declined to restore voting rights for ex-convicts in Florida, a key battleground state that is often decisive in presidential elections.

Mr Obama also called for more polling places and early voting, as well as a law making Election Day a national holiday “so if you are somebody who is working in a factory, or you are a single mom who has got to go to her job, and doesn’t get time off, you can still cast your ballot”.

The former president endorsed statehood for Washington DC and Puerto Rico, called for an end to partisan gerrymandering — the drawing of congressional districts to favour specific political parties — and endorsed scrapping the filibuster, an arcane Senate rule that can delay or block laws from being passed.

“If all of this takes eliminating the filibuster, another Jim Crow relic, in order to secure the God-given rights of every American, then that is what we should do,” Mr Obama said.