Bad Company: The History Of The 10 Biggest Daily Percentage Rallies Is Bearish For Investors

Home Financial news Bad Company: The History Of The 10 Biggest Daily Percentage Rallies Is Bearish For Investors
2020-03-272020-03-27By finanz.dk

Currently, as of midday on Thursday, March 26, the Dow Jones Industrial Average (DJI) is in the midst of a bear market rally boost of 23% off the March 23 intraday low. This comes on the heels of the fifth-largest single-day percentage rally in Dow history.

A quick look at the list of the comparable rallies finds our recent bump keeping very bad company. The context for all of the previous such rallies has been the most bearish periods in market history.

Let’s dive deeper into the data to see if there are any historical patterns that we can use to evaluate the current market environment. 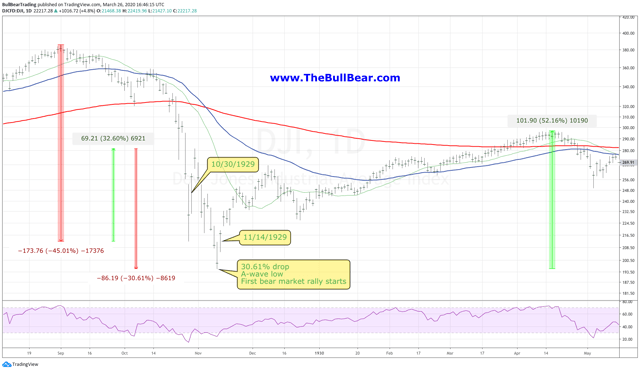 As we will see, the closest analogue to our current market setup is the very first rally day on our list, the October 30, 1929 rally of 12.3%, the third-largest of all time. This rally came at the bottom of the third phase of a violent -45% decline off an all-time high and preceded a bear cross of the 50-day Exponential Moving Average (in blue) below the 200 (in red) by a few days. The following rally travelled 32.6% from the previous day’s intraday low.

Similar to the impetus provided by the current Federal stimulus bill, the rally was sparked by news that the Rockefellers were buying the market:

The authorized statement of John D. Rockefeller yesterday that he and his son believe that there is nothing in the business situation to warrant the destruction of values which has taken place during the past week and that they are buying and will continue to buy common stocks which represent sound investment values had an electric effect on the market. Mr. Rockefeller’s statement followed statements by the country’s leading bankers and industrialists that in their opinion the pendulum had swung too far.

These statements brought a wave of buying into the market that quickly absorbed many big blocks of stock which had been overhanging the market, and that placed the market once more firmly on its feet and headed toward the recovery that continued practically all day.

Unfortunately for traders and investors who bought into the three-day rally, the Dow subsequently dropped -30.6% to a substantially lower low. And this is just the first of many instances in which market participants were punished for buying into a similar big pop.

The following rally day of note occurred the day after DJI made its first substantive bear market low, on November 14, 1929, a gain of 9.3%. This was the first move in a real bear market rally that gained over 52% from the low. As we will see as we go through this data, that was the only example among the prior top 10 rally days of a move that traders were rewarded, rather than punished, for buying into.

It’s easy to see the similarities between the current market setup and the October 30, 1929 rally: 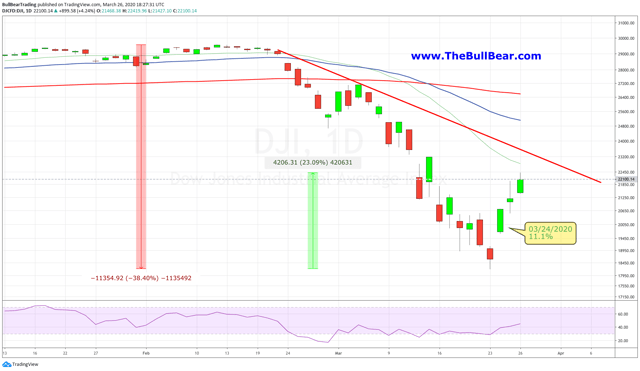 As in 1929, the Dow is coming off its third phase of a sudden and violent decline off an all-time high, having dropped -38.4%. There has also been a bear EMA cross a few days before the recent bottom. The current rally has moved DJI 23% from its price low. If the analogue continues to play out, and we are in the fourth phase of an initial bear market decline, then we can expect a substantially lower low. If we apply the template of a -30% drop from the current rally price high, that would give us a Dow value of about 15675, which equates to about the level of the January/February 2016 lows.

Now let’s continue to look at the action surrounding the rest of the biggest daily percentage gains in Dow history. 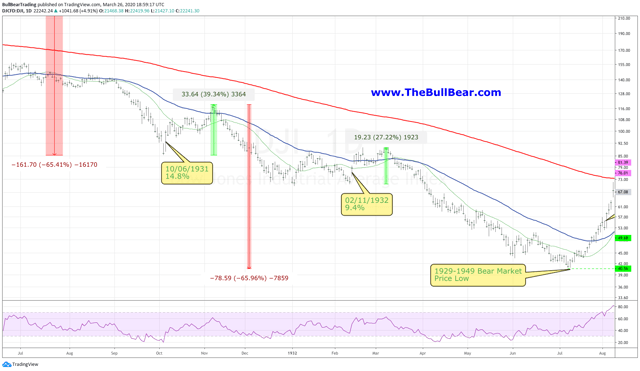 In the case of the October 6, 1931 rally of 14.8%, the largest daily percentage gain of all time, the market had dropped over -65% from its bear market rally high and saw a nice rally of about 39% from trough to peak over about a month. Nice gain if you caught the move early and cashed out in time. If you didn’t, the there was a 66% drop to the bear market price low awaiting you. The same result played out from a pop of 9.4% on February 11, 1932. 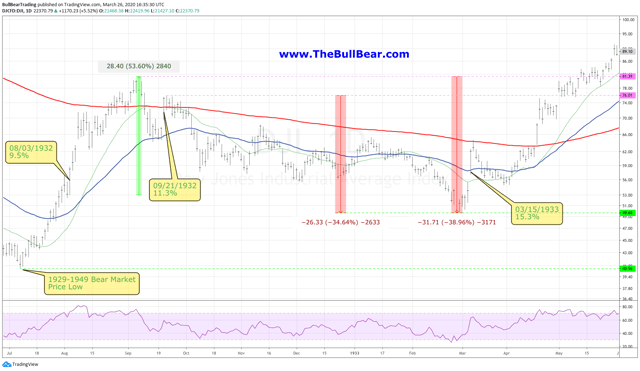 The August 3, 1932 example is something of an outlier in our data group, since it came in the middle of a large move off an important price low, rather than very close to the start of a rally following a large decline. From the intraday low, the market rallied a very substantial 53.6%. But if a trader did not book profits quickly, the gain turned into a loss in less than 4 months, and the decline from the high was almost -40%. Results were even worse for traders who bought into the September 21, 1932 rally of 11.3%, which very soon reversed to losses of -35% from the high.

The October 21, 1987, rally of 10.1% does bear some resemblance to our present market, and is the next nearest analogue: 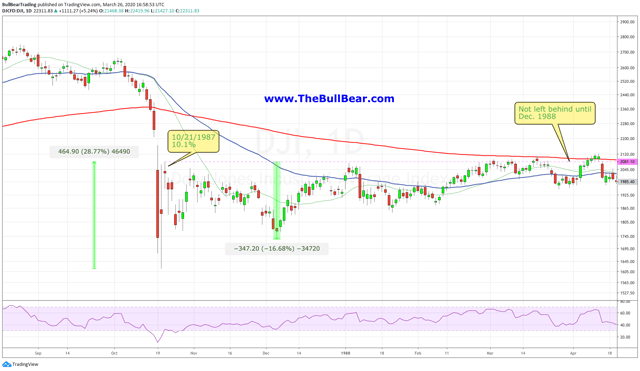 In this case, the market was -41% from its all-time high and also in its third phase of decline when it swung violently off the prior session’s intraday low to a peak gain of 29%. Shortly thereafter, there was a bear cross of the 50- and 200-day EMAs. But from the intraday price high on October 21, it took about 14 months for the market to get above it and continue higher. In the meantime, investors and traders had to sustain losses of as much as -17%, though there was no further price low and the market did continue on to a great bull market. This is the best example for those who are bullish now and believe that our current market condition is similar to that of 1987. This is the only example of a daily gain of 9% or better that came in the context of an ongoing bull market.

READ ALSO  An Energy Trade War Is Brewing Between China And The U.S. 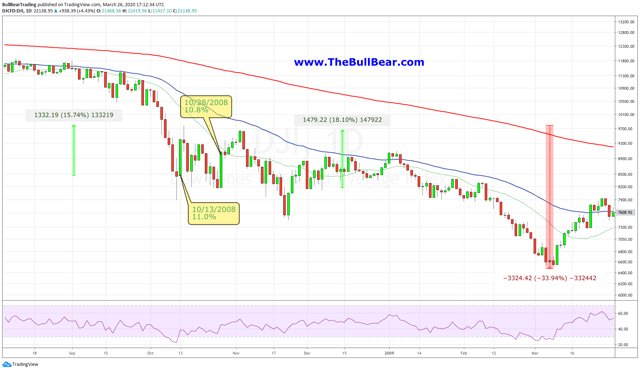 As you can see, massive daily rallies of the sort that we experienced on March 24 come in the context of serious bear markets. They can sometimes come near the beginning of large bear market rallies that can be profitable for astute and nimble traders, but investors have almost always found them to be bull traps that result in substantive losses that take a long time to recover. In virtually every case, a much better buying opportunity follows later for patient traders and investors.

Of course, it could be different this time. Currently, we have a Federal Reserve Bank that has resolved to backstop all financial market and economic losses and risks, and a Federal government that is on board with any and all extreme fiscal measures to ensure consumer end-demand. The problem is that these seem to be more like acts of desperation that come at the end of something rather than bold acts of leadership that come at the beginning of something.

Readers will also find this piece complementary to the above analysis:

Thank you for reading.