BA to launch coronavirus tests on some transatlantic flights

British Airways is to introduce coronavirus tests on some transatlantic flights in an attempt to convince the UK government to drop quarantine for incoming passengers.

Along with its partner American Airlines, the carrier will this month introduce testing on select flights to London from New York, Dallas and Los Angeles.

The UK is expected to cut the 14-day self-isolation time for passengers arriving in Britain to about a week after lockdown ends in December.

But BA, along with other leading airlines, wants the government to drop quarantine entirely to help reverse the collapse in passenger numbers since the outset of the pandemic.

The airline, owned by Anglo-Spanish group IAG, will offer customers the chance to take three tests: one 72 hours before departure, one upon landing at Heathrow and one three days after arrival.

Although the action will not remove the need to quarantine, BA aims to show ministers that pre-departure testing is a workable substitute for self-isolation.

BA chief executive Sean Doyle said he hoped the flights would help “demonstrate the ability to fly safely, and to fly without the need to quarantine”.

The carrier has been particularly exposed to the collapse in travel between the UK and US this year.

It is the largest long-haul airline flying into North America, and its routes over the Atlantic are about a third of its flight capacity. 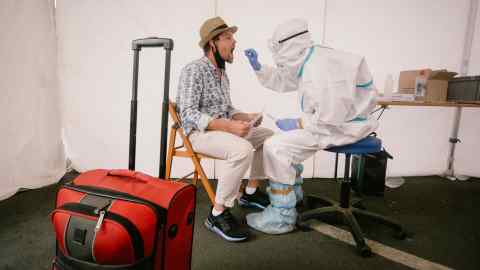 While the airline would normally operate 84 flights a week between New York and London, last week it flew just 21.

“The vaccine is great news and we are encouraged by that. But the details of when it is rolled out, to what scale and when it will have a material effect on travel is unclear,” Mr Doyle said.

“It is obvious we need a solution in the short term to get travel going again,” he added.

“What we are doing is trying to create more data points . . . to try to have a meaningful debate with policymakers in the UK.”

The test is one of several the industry has begun running to help gather data to convince governments and regulators to drop travel restrictions that have hammered the industry this year.

A United Airlines flight that tested every passenger before departure touched down at Heathrow airport this week.

“These flights are a good proof of concept for governments around the world that are considering making testing part of the travel experience,” said Toby Enqvist, chief customer officer at United.