B2Gold And Its Jurisdiction Risk (NYSEMKT:BTG)

B2Gold (NYSEMKT:BTG) currently has a market cap of $5.88 billion. It is right in that middle area between becoming a large-cap gold company and where some would consider a mid-tier gold mining company. B2Gold first caught my attention as I was analyzing junior gold mining companies and their historical performance. B2Gold has had some of the best performance over the past 10 years of any of the junior miners. It went from being a company with a market cap of $1 billion to a market cap of $5 billion in just 10 years during a relatively challenging gold price environment. There were certainly peaks and valleys in the stock price during that decade, but the trend was generally up.

When you compare B2Gold to its junior gold mining peers, you see that it has an excellent track record over the past 10 years. 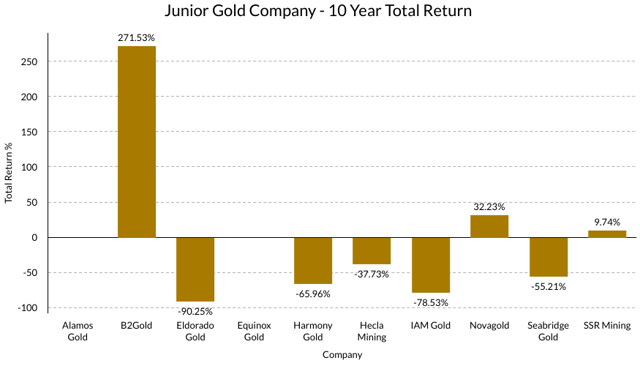 And here is B2Gold’s total return relative to its peers over a five-year time horizon. 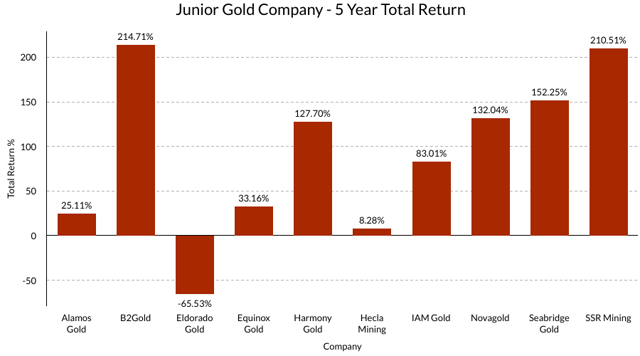 When a company outperforms consistently, then it is worth getting to know the leadership of the company. Companies that outperform rarely happen by chance. In the case of B2Gold, its long-time CEO is Clive Johnson. Mr. Johnson has been with the company for between 13 and 14 years. 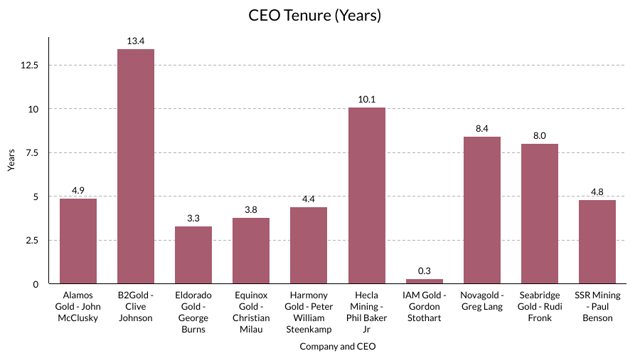 His total return during that time frame is better than any of his peer companies, partly because he has been there the longest, but also because he is extremely competent. His annualized rate of return since becoming CEO in 2007 is roughly 10 percent, which is better than most of his peer CEOs. 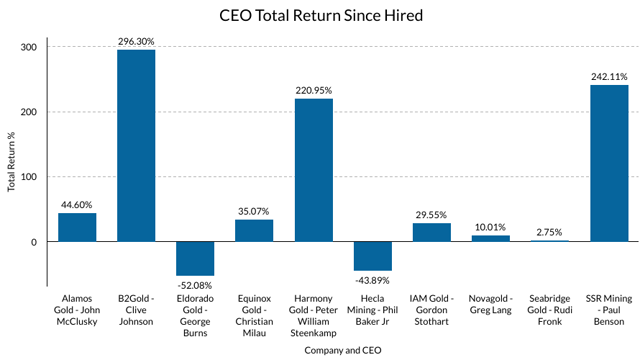 If you like to invest based on company leadership, then it is worth noting that Mr. Johnson is also on the board of Uracan Resources Ltd., sometimes also known as Vanadian Energy (OTCPK:URCFF). As you can see from the charts above, Clive Johnson is good at his job and worth a look at investing alongside.

Where Are B2Gold’s Mining Jurisdictions?

The one thing about B2Gold that is unconventional and which gives me pause as an investor is its mining jurisdictions. There’s been a lot of conversation in the past few months about dollar shortages and the importance of owning gold mines in jurisdictions with dollar swap lines.

As an example, in April, when the market was most volatile, a gold mine in Papua New Guinea operated by Barrick Gold (GOLD) was not given a new permit by PNG’s government. According to Barrick Gold, this effectively nationalized the mine. This should have grabbed people’s attention.

In 2019, B2Gold derived its revenues from the following mines and jurisdictions:

However, also in 2019, B2Gold sold its two producing Nicaragua mines. Its two Nicaragua mines were barely profitable if at all, based on the AISC being very near the price of gold. Therefore, the company made a wise decision and divested itself of those gold mines. 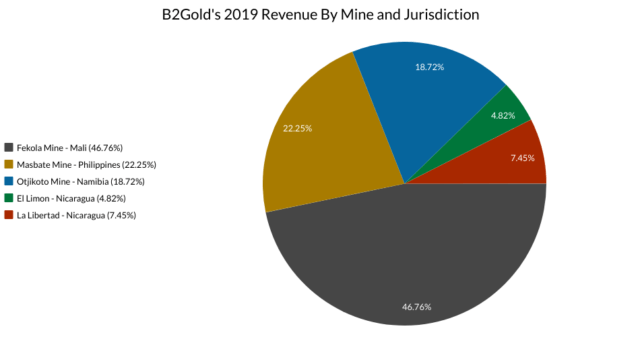 Source: Created by the author using data from B2Gold’s 2019 Financials

After divesting those mines, this has been B2Gold’s percent of revenue from each mine during the first quarter of 2020. I’m hesitant to use Q1 2020 data as it was no doubt affected by COVID-19 differently in different places; however, this was the data nonetheless. 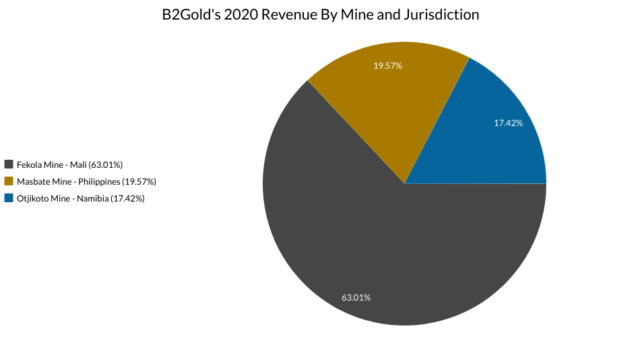 B2Gold is engaged in a 50/50 joint venture with AngloGold Ashanti (NYSE:AU) in Colombia on the “Gramalote Project.” The pre-economic analysis (PEA) was completed in January of 2020 with positive results. B2Gold believes the deposit to be at least 2 million ounces at a grade of .79 grams/tonne.

B2Gold has filed the Environmental Impact Study approval from the Colombian government. It is in the process of completing the final feasibility study and expects that to be completed during the first quarter of 2021.

B2Gold is optimistic about the economics based on the following:

The Gramalote Project has several key infrastructure advantages, including: reliable water supply – high rainfall region and located next to the Nus River; adjacent to a national highway, which connects directly to Medellin and to a major river with port facilities, capable of bringing supplies by barge to within 70 km of the site; proximity to the national electricity grid with ample low-cost power and a stable record of hydroelectric power; and a skilled labour workforce within Colombia. In addition, B2Gold expects the Gramalote Project to benefit from several key operational advantages, including: excellent metallurgical characteristics of the ore, which results in high recovery rates at low processing costs; relatively low strip ratio in the mine; and ability to mine and process higher grade ore in the initial years of the mine life resulting in improved project economics.

A Closer Look At Each Jurisdiction

I’m by no means an expert in understanding government and jurisdiction risk, but I thought I would highlight the jurisdictions and try to understand them better. Here are just a few thoughts based on my research.

READ ALSO  Beirut explosion: ‘In the blink of an eye, the whole world changed’

Mali is the eighth-largest country in Africa by land mass and the third-largest producer of gold. Mali’s government is that of a semi-presidential republic. Its governmental system is very similar to the United States of America. Mali’s relationship with the United States is very good and also has a strong relationship with France, which colonized Mali from the early 1900s to 1960.

Mali’s military consists of an Army and an Air Force. They are not as modernized as some other world nations, but are in the process of modernizing with time and resources.

One of the primary risks to the Mali gold-producing jurisdiction is the spillover of conflicts from neighboring African countries. However, Mali itself is a very safe and business-friendly jurisdiction for the time being.

The Philippines is also a republic. Specifically, it is a representative republic similar to the United States and operates under three branches of government: Legislative, Judicial, and Executive. The current president is Rodrigo Duterte, who is well-known for one-liner headlines from time to time.

The United States has a strong relationship with the Philippines based on its favorable governmental structure and the relatively large amount of trade that takes place between the two countries. That said, the current president, Duterte, is trying to implement a policy where the Philippines is less dependent upon the United States. This is a sentiment that is worth keeping an eye on. That said, the Philippines is a very safe place for B2Gold to be doing business both historically and for the time being.

The Namibian government is similar to the United States in that it also has three branches of government – the executive, judicial, and legislative – and is also a representative democratic republic.

The dominant political party since Namibia gained independence in 1990 has been SWAPO (South West Africa’s People’s Organization). Before gaining independence, SWAPO was known as having a socialist and Marxist ideology. Since independence, it claims to have adopted a more capitalist ideology; however, in 2017, it changed to claiming “socialism with a Namibian character.” Henny Seibeb describes the SWAPO party ideology as liberal nationalism with traces of dogmatism, authoritarianism, and statism.

SWAPO received 65 percent of the parliamentary votes in 2019. The politics in Namibia appear to be much less favorable than the other two jurisdictions. Any country that has socialist underpinnings will be more challenging to operate within for a for-profit company.

Does The Market penalize B2Gold?

I wanted to analyze B2Gold and try to understand if the market is penalizing B2Gold for having jurisdictions that are lesser-known and without dollar swap lines. I decided to look at its relative valuations to other companies based on the three simple metrics below.

I chose peer companies that had more favorable jurisdictions such as Canada, Australia, and other countries in the Americas so that I can see if there’s a substantial difference in relative valuations. These included Pan American Silver (PAAS), Kirkland Lake (KL), Equinox Gold (OTC:EQX), and Alamos Gold (AGI).

A Look at Relative Valuations 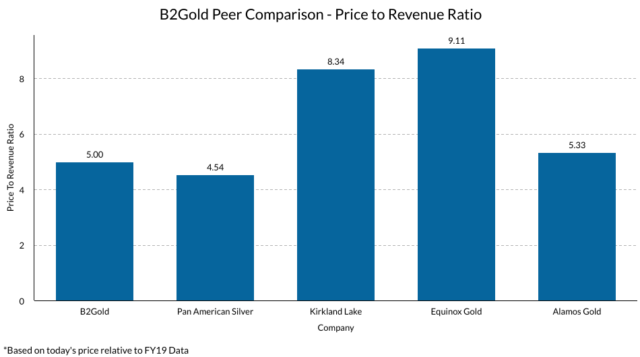 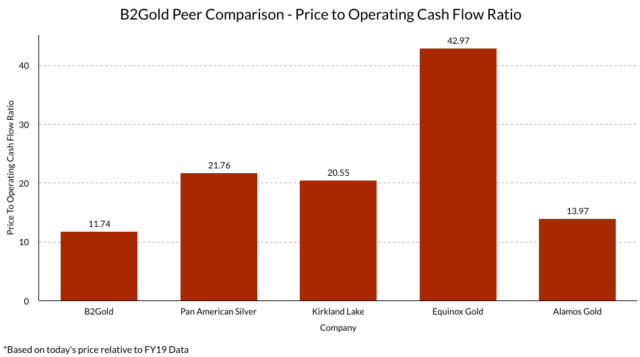 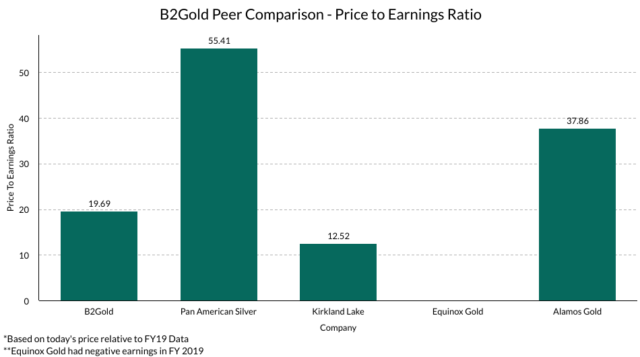 Based on the results of this analysis, I believe B2Gold’s valuation is being discounted by the market based on its mining jurisdictions (unless there’s something else I’m not aware of). In each of the relative valuation methods used above, B2Gold is either the lowest or very near the lowest ratio among the group.

This can be viewed one of two ways:

If you think the risk is a non-factor and decide to purchase the shares, picture a scenario where more uncertainty and risk enters the market, and gold prices continue to rise. This is the most likely scenario in my opinion somewhat based on how gold prices and inflation behaved during the Great Depression. Don’t be surprised if the valuation divide between B2Gold and its peers with better jurisdictions becomes larger. This is a scenario that should not be discounted with the presidential elections on the doorstep.

With that said, I am a shareholder of B2Gold primarily based on past performance, relative valuations, and the company’s leadership. However, it’s only a small portion of a broader diversified portfolio that also includes some of its peers like Equinox Gold. This makes me more comfortable owning the shares.

Disclosure: I am/we are long EQX, BTG. I wrote this article myself, and it expresses my own opinions. I am not receiving compensation for it (other than from Seeking Alpha). I have no business relationship with any company whose stock is mentioned in this article.

Previous PostYale Study Suggests COVID Death Toll In US Has Been “Substantially Undercounted”Next PostRemember What It Is To Be An American. And Let Freedom Reign Again