Armenia and Azerbaijan have signed a ceasefire agreement to end the war for control of Nagorno-Karabakh that will deploy Russian peacekeepers in the disputed Caucasus territory after more than six weeks of conflict.

The truce, which follows the capture of a strategically decisive city by Azeri forces, represents a major military victory for Baku, cementing its large territorial gains and raising questions about the future of the Armenia-controlled enclave.

Thousands have been killed and more displaced by intense fighting in the mountainous region and its surroundings this year. The region is internationally recognised as Azerbaijani territory but is populated by ethnic Armenians and has been controlled by a Yerevan-backed administration since the early 1990s.

The decades-long dispute erupted into open conflict in late September, with Azerbaijan vowing to recapture all of the occupied territories. Baku has the strong support of Turkey, while Russia, the dominant geopolitical power in the region, sought to remain neutral even as multiple ceasefire agreements negotiated by Moscow failed.

This six-week war led to a victory for Azerbaijan. The agreement requires Armenia to make major territorial capitulations

“The occupation of the territories of Azerbaijan is coming to an end,” Ilham Aliyev, Azerbaijan’s president, said in a call with Russian president Vladimir Putin to discuss the settlement.

Nikol Pashinyan, Armenia’s prime minister, said the terms of the truce were “unbelievably painful for me and my people” but were necessary due to “a deep analysis of the military situation”.

Russia will deploy almost 2,000 troops and 100 armoured personnel carriers to the front line between the combatants under the agreement, which came into effect at midnight on Tuesday morning.

The deal also guarantees a land corridor linking Nagorno-Karabakh to Armenia, which will be monitored by Russian peacekeepers, as well as a staggered withdrawal of Armenian forces from Azeri districts surrounding the enclave through December 1.

Mr Putin said: “the agreements reached will create the necessary conditions for a long-term and full-format settlement of the crisis”. 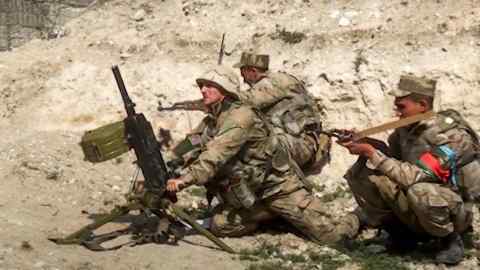 The details of the truce “make it clear that this six-week war led to a victory for Azerbaijan”, wrote Zachary Witlin, senior analyst at the Eurasia Group, a political risk consultancy. “The agreement requires Armenia to make major territorial capitulations and drop from the deal determination of special status, let alone recognition, of Nagorno-Karabakh.”

News of the settlement, which hands control of Shusha — known in Armenia as Shushi — and scores of other towns to Azerbaijan, sparked unrest in Yerevan, with hundreds of protesters breaking into government buildings.

Videos published on social media appeared to show protesters dragging Ararat Mirzoyan, the speaker of the country’s parliament, out of his car and beating him on the street. Mr Mirzyoan has been hospitalised, Mr Pashinyan’s office said.