Avoid UPS As We Head Into Gift Giving Season (NYSE:UPS)

Since I wrote my bearish piece on United Parcel Services Inc. (UPS) a few months ago, the shares have returned negative 2.6% against a gain of ~6.75% for the S&P 500. The firm has presented generally favourable financials since then, so I need to review to see whether I should buy the stock back. I’ll make this determination by looking at both the latest financial data, and by looking at the stock as a thing distinct from the underlying business. I’ll also update investors on my short put option trades here because these are instructive and, more importantly, they give me a chance to brag. I would also like to take this opportunity to announce a new section that’ll be going in all future articles: “Bank Watch.”

You’re a busy crowd, dear readers. You may be so busy that you didn’t manage to catch the title of this article, and you may have breezed past the bullet points above. If that’s your situation, I’ll come right to the point. I think this is a reasonably good company, but with growing sales comes growing costs. Investors aren’t compensated by sales, they’re compensated by profits, and these have been meagre in my estimation. In spite of that, the shares remain near record high valuations. For that reason, I must recommend continuing to avoid the name as we head into the gift giving season. Speaking of gift giving, my birthday is fast approaching, so please reach out for recommendations in case you’re done wracking your brain trying to figure out what to get me.

I think it’s best to be honest, and reveal biases whenever they might be relevant. Having worked at one of Canada’s biggest brokerages, I really, really dislike the big Wall Street (Bay Street up here) firms. I won’t waste your time enumerating the many ways in which I find them objectionable. Suffice to say, I don’t like them. I also think they are too often immune to bad calls they make because investors have short memories. Bank Watch will be a section that I add to future articles that highlights the calls of various investment banks. As part of my ongoing review of past articles, I will comment on the performance of those calls. Today is the maiden voyage of this service, where I’ll be highlighting calls from both Credit Suisse and UBS. These firms are both bullish at current prices, and I’ll check back in on these results over the coming months when I check on UPS again.

I’ve written extensively about the long financial history here in previous articles, so I won’t go over well-trodden ground. Suffice to say that I’ve concluded that the dividend remains reasonably well covered, and that management has treated shareholders well, having returned just over $19 billion to owners in the form of ever-growing dividends since 2014.

I would like to focus on the most recent period compared to the same time last year, as I think what we see is instructive. First, I think it’s impressive that UPS is relatively unique because they have actually managed to grow the business in 2020. Specifically, sales were ~11.6% higher in the first nine months of this year as compared to the last. Unfortunately, with the exception of fuel expenses, every other operating expense was also higher this period compared to last. This caused operating profits to fall slightly by ~⅓%. Net income was rescued by a 50.5% uptick in “investment income and other.” Thus, I think the most recent period shows that this may not be a scalable business. This makes sense, as increased activity obviously leads to both increased sales, and increased expenses.

None of that stopped the firm from increasing dividend payments by just over 5%, though. Given that I think those dividends are sustainable, I’d be willing to buy back at the right price. 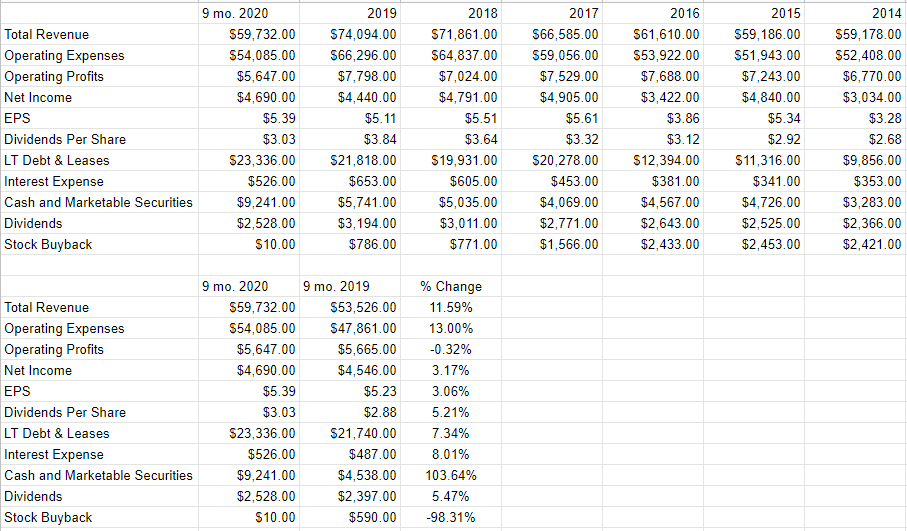 Those who know me well know that when it comes to my life outside of capital markets, I probably verge on the profligate. When it comes to stocks, though, I’m absolutely miserly. For that reason, I insist on a stock being cheap before I buy it. I think it was this cheapness that was partly responsible for me doing well on this name in the past (UPS Remains A Buy). I also like to remind everyone that the more they pay for a stream of future cash flows, the lower will be their subsequent returns. The fact that I can tend to “go on about this” has had an inevitable impact on my social life, but I will keep testifying regardless. I think cheap stocks offer both lower potential risk and have higher potential rewards. They are lower risk because much of the bad news is already “priced in”, so the market is less likely to be shocked. They offer higher returns because of something I call the “prodigal son phenomenon,” if a stock that has disappointed investors for years suddenly shows some life, the shares may pop in price.

I judge whether the shares are cheap or not in a few ways, ranging from the more simple to the more complex. On the simple side, I like to look at the ratio of price to some measure of economic value. To repeat my earlier claim, the more an investor pays for $1 of future economic benefit, the more risky is the investment. Ideally, I want to see the shares trading at a discount relative to both their own history and the overall market. On this basis, I think UPS remains quite expensive, per the following:

In addition to looking at simple ratios of price to some economic value, I want to try to dig in and understand what the market is currently assuming about a given company’s future. This is a bit more complicated than looking at ratios, but it can offer interesting insights. In order to understand the assumptions embedded in price, I turn to the methodology described by Professor Stephen Penman in his book “Accounting for Value.” In this book, Professor Penman walks investors through how they can use a fairly standard finance formula to work out what the market must be assuming about a given company’s future by isolating the “g” (growth) variable. Holding all else constant, this model suggests that the market is currently assuming a long-term (i.e., perpetual) growth rate of~ 5.5% for UPS. While this is ever so slightly less optimistic a forecast than we found a few months ago, I still consider it to be fairly optimistic a view, and in this context, optimism is dangerous. For that reason, I must recommend that investors continue to eschew this name.

Options Update and The Biggest Driver of Returns

I am trying to be more honest, dear readers. For that reason, I’m not going to spin you a line suggesting that “I don’t want to brag.” Like many other contributors on this forum, one of my primary motivations for doing all of this is to find things to brag about. Given that it’s such a strong motivator, why would I try to convince you that it means nothing to me. With that latest window into my dark soul opened, it’s time for me to brag about my performance with short puts here. I sold a batch of April 2020 puts with a strike of $100 and was exercised on those, with a net purchase price of ~$97.15. These shares did well between the time they were “put” to me to the time that I sold them last September. In my next article on UPS, I recommended selling the January 2021 puts with a strike of $90. I earned $4 for each of these, and they’re currently bid-asked at $.06-$.07, so that trade worked out quite well.

My history details the two ways that short put options can “win” for investors. They either earn decent premia, or they oblige the investor to buy a great company at a great price. This is also instructive, because it reminds investors of something obvious and important that they forget with alarming regularity. Namely, that the returns we enjoy are largely a function of the price we pay for them.

When I recommended selling the April 2020 puts with a strike of $100, the shares were trading ~$117. Had I held the shares that were “put” to me, I would be sitting on a 69% return. The investor who simply bought the shares in the market would have a much lower return (40%). This is part of the power of short put options, and that’s why I think investors would be wise to consider employing them.

That said, we need to wait for premia to return to attractive levels, as I don’t think the risk-reward relationship between premia received and various strike prices make sense at the moment. If an investor wants to earn decent premia, they need to take on too much risk with unreasonably high strike prices in my view. For that reason, I need to wait for the price to drop before entering this market again.

I think United Parcel Services is a fine company, and that it will likely have a great holiday season. The problem is that costs rise right along with sales. That fact, coupled with the fact that the shares remain expensive leads me to continue to eschew the shares. In addition, I think I have demonstrated yet again that short puts are a powerful way to invest in a manner that can generate higher returns at lower risk. It seems that some large financial institutions have taken a different view about this business, and I’m very much looking forward to tracking how their recommendation does as compared to mine. You may have detected that I joke around a fair bit in my articles, dear readers, but I am seriously curious about how the recommendations of these firms do. I think the only way to become aware of that is to track them, so I’m looking forward to see how “Bank Watch” does.

I think price and value can remain unmoored for some time, but sooner or later they’ll meet. I think investors would be wise to continue to avoid this name until price falls to match value.