In the past, a cloud communications-focused SaaS company with more than 100,000 customers around the globe, Avaya Holdings Corp. (NYSE:AVYA) made a few wrong business decisions that ultimately led it to the inability to service gargantuan debt which precipitated its bankruptcy in 2017. Since then, the company embarked on a new path towards full recuperation and set ambitious financial goals.

AVYA’s share price is well off multi-year lows touched in April, especially thanks to an announcement of the global expansion of Avaya Cloud Office, the product unveiled in February 2020, that it has been developing together with RingCentral, Inc. (NYSE:RNG). There is no doubt that the prospects of the cloud technologies market are remarkably promising, especially due to the rise of the remote work stimulated by the pandemic, but given analysts are predicting mediocre (low-single-digit) revenue growth in the medium term, the stock does not look attractive, even considering appealing single-digit valuation. Two weeks ago, J.P. Morgan confirmed its Overweight rating. Overall, the Wall Street sell-side pundits are pronouncedly bullish on Avaya, while I do not share their sentiment considering a few reasons that I would like to discuss below in the article.

As I said above, the history of Avaya was overshadowed by the 2017 bankruptcy hastened by the inability to service around $6.6 billion in total debt. Not coincidentally, it is always tough to believe that a firm that went through bankruptcy will fully recuperate rising from the ashes and avoid previously made missteps. However, the Q2 FY20 results illustrated that Avaya has taken into account the past business strategy errors (that led to a precipitous decline in revenues in 2013-2016) and some of its segments have been clearly growing, but the pace of expansion is glacial, at least for now. 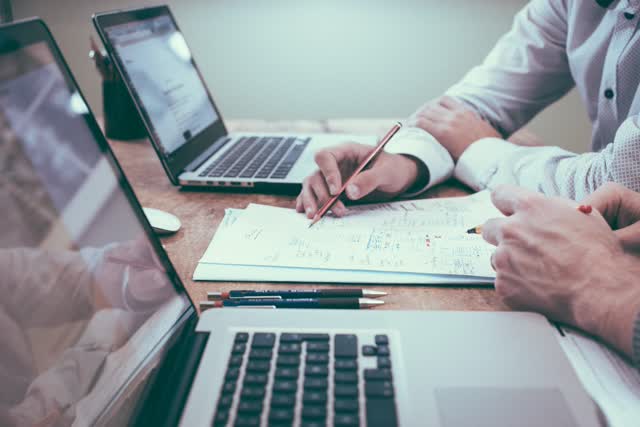 The company has two revenue streams: Products and Services. Avaya’s flagship region is the U.S., where it generates around 56% of the total sales (as comes from the Q2 data); that will likely change a bit going forward, as Avaya Cloud Services is expanding in Australia, Canada, and the UK. The first segment includes Unified Communications and Contact Center, and the second one encompasses Global Support Services, Enterprise Cloud and Managed Services, and Professional Services. The Services segment has relatively strong sales momentum, while Products clearly lags. Services rose both in Q2 and H1 FY20, reporting a 3.5% growth in the second quarter and 2.2% growth in the first half of the fiscal year. Still, despite the improvement in the division’s sales, the consolidated revenues went south. They contracted 3.5% in H1 and 3.8% in Q1. The bright spot is that though the overall top-line performance was bleak, AVYA has undoubtedly succeeded in expanding the recurring revenue. In Q2, the share of recurring revenue reached an all-time high of 64%, which compares more than favorably to the FY19 results of only 58%. A high share of recurring revenue eliminates sales volatility to some extent and typically commands a valuation premium.

For FY20, Avaya has no revenue or EBITDA estimates, as the uncertainty spawned by the pandemic made it withdraw guidance. Previously, it expected flat GAAP sales in the best-case scenario (see page 3). Analysts are expecting FY20 revenue to decline in mid-single digits. Also, according to their forecasts, the above-mentioned SaaS player RingCentral has far more substantial revenue growth prospects. They are anticipating a 24% sales growth in 2020 followed by equally strong 2021 and 2022.

No profit, but positive FCF

While Avaya has been doing its best to bolster sales, its consolidated revenue barely covered operating expenses. In H1 FY20, its gross profit fell 3.5%, while the Q1 gross profit was down 3.9%; as a consequence, H1 pro forma operating income (gross profit after SG&A and R&D but before restructuring expenses) equaled $140 million (a margin of just 10%) vs. $191 million in 1H19.

H1 pro forma EBITDA (computed as the sum of GAAP operating income, impairment, D&A from the cash flow statement, and restructuring expense; my methodology differs from the company’s formula) also declined. It added up to $261 million with an 18.7% margin vs. $324 million in 1H19. 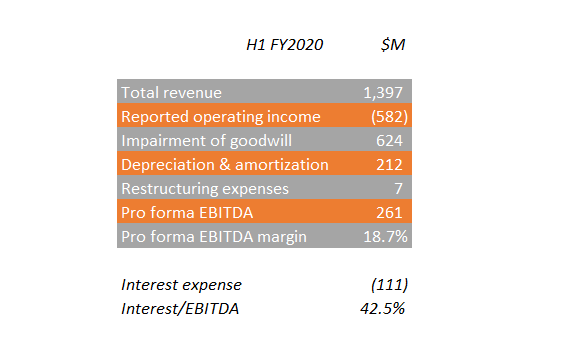 Did it cover interest expenses safely? Well, interest required 42.5% of pro forma EBITDA and almost 8% of the total revenue. Is that a robust coverage? I would not say so.

But what about the bottom line? Since mid-2019, Avaya’s profits have been climbing lower and lower, ultimately touching $1.4 billion on March 31 (on an LTM basis). That is a terrifying figure, especially considering that market capitalization is only ~$1 billion. However, I would recommend not to focus too much on GAAP figures here. Operating cash flows and FCF remained relatively strong; net CFFO of $150 million (Last Twelve Months) was adequate enough to cover $114 million in capital investments. So, the principal culprit of negative GAAP earnings is intuitively evident: non-cash expenses, or impairment, to be precise. The hefty impairment was caused by lower future revenue expectations because of the uncertainty spawned by the pandemic. As the CFO clarified during the earnings call:

Based on our analysis, we determined our projections of future revenue in the product and solutions reporting unit, have been adjusted to reflect increased risk from higher market uncertainty and the accelerated reduction of product sales related to our historical on-premise perpetual license, or CapEx model sales.

Essential matters not to be overlooked when analyzing capital efficiency

In the cases of companies that have a burdensome debt on the balance sheet, equity-based efficiency ratios are misleading, as they tell only a part of the story, artificially inflating the numbers and making them look more appealing. Another essential issue is that Avaya has booked hefty impairments in recent years, which resulted in a steep decrease in net worth. The lower the net worth, the higher Return on Equity.

In the case of AVYA, we cannot even compute ROE because the nominator is negative. Instead, we can factor in cash flow or FCF and average Total Capital (Total Debt & Shareholder Equity) in the equation and calculate Cash Return on Total Capital. As of my estimations, its LTM CROTC amounted to 3.5%. That is far below the Cash Return on Equity (Net CFFO/Average Equity) of 14%. I have also noticed that RingCentral and Avaya have similar issues: both have mediocre capital efficiency, as RNG delivered CROTC of only 5.2%. The essential difference is that on the back of double-digit revenue growth, RNG’s CROTC will likely improve in the medium term, while in the case of AVAYA, it is highly questionable given anticipated mediocre sales performance.

For the company that once faced a Chapter 11 bankruptcy, the financial position remains of principal importance. Of course, an over 907% Debt/Equity looks exceedingly risky, and leverage-averse investors should avoid it and look for better picks. However, D/E is not the best metric here, because, as I said above, the incessant decline in equity had been a direct consequence of impairments. So, we should assess Net debt/EBITDA to have a better understanding of the financial position. As of end-March, this leverage ratio stood at 3.5x (see slide 12), which is anything but perfect. I have already said above that pro forma EBITDA was only 2.4x greater than accrued interest; that is too-weak coverage. Yet there are some bright spots. For instance, it has no debt maturities within one year. Next, the company repaid $250 million in debt in H1 FY20. Still, it had also been repurchasing shares; it spent $330 million on the buyback out of authorized $500 million (see slide 13). Frankly, it would be better if Avaya allocated more funds to debt reduction, not share repurchases.

The first thing an investor should do when valuing a heavily indebted company like Avaya Holdings is to exclude net earnings-based ratios from a scorecard, e.g., Price/Earnings. Debt-adjusted earnings yield or Enterprise Value/Levered FCF (or FCFF, with interest paid added back) are metrics of choice here. As of my calculations, its EV/FCFF is standing at 14.1x (or ~7%). For a tech company, such a low multiple typically signalizes undervaluation. For a broader context, overpriced RNG has EV/FCFF of 846.5x, Forward EV/EBITDA of 173.9x, and EV/Sales of 26.4x.

Avaya Holdings has an imperfect balance sheet, weak coverage of interest by pro forma EBITDA, and mediocre growth prospects in the medium term. Its current capital efficiency is poor, while impairments continue. Valuation looks appealing, but I remain on the sidelines.