AutoNation Is Pricing In A Recovery That May Not Come (NYSE:AN)

One of the many industries that has been heavily impacted by COVID-19 is the entire automotive sector. Economic shutdowns across the world had ripple effects on things like car production through disrupted supply chains, reduced buying activity due to job losses and general uncertainty among consumers, and used car pricing due to reduced demand and too much inventory. None of these things are good, but on the bright side, some of these factors seem to be better than feared.

One beneficiary of this is car dealership behemoth AutoNation (AN), which has more than 300 dealerships across the US and a variety of marques. The company is the bellwether in the car retail subsector, and while things are looking up from disaster levels earlier this year, shares look fully priced to me.

AutoNation has posted strong growth in the past decade, with the only down year being 2018. AutoNation has managed to ride the wave of strong economic activity in the US to robust earnings growth despite new car sales numbers leveling off in recent years. It has proven to be a superior operator with a focus on cost controls and profitable revenue growth, not just growth for the sake of growth. However, there are forces in play thanks to COVID-19, and the damage done as a result, that I think AutoNation will have to contend with in the years to come.

First, AutoNation gets about one-third of its automobile retail revenue from used cars, with the balance from new cars. Further, it is split roughly evenly between domestic, import, and premium luxury segments. 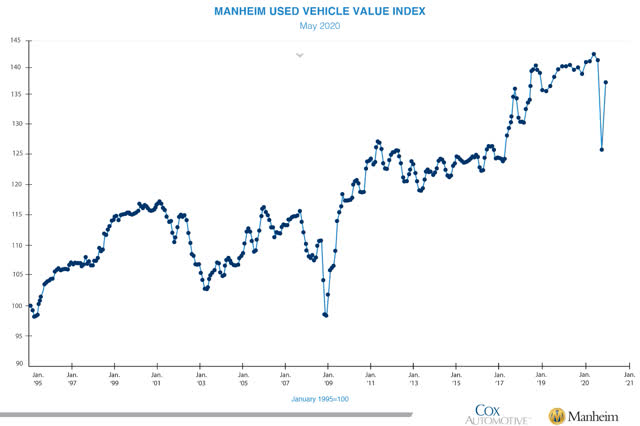 On the used car front, as we can see above, prices went into free fall earlier this year as buying demand simply dried up in the wake of economic shutdowns. While May saw a very strong rebound, we aren’t back to normal levels, and one wonders if we’ll get there. After all, the situation has changed immensely against pre-COVID-19 fundamentals, and AutoNation and its competitors are still dealing with relatively weak demand.

Second, on the new car front, we have ~40 million people in the US that are newly-unemployed thanks to COVID-19, and while job losses seem to have plateaued, the idea that we’re going to see a massive snapback in job gains to reverse prior losses is extremely difficult to buy into. People of all economic classes buy new cars, and with more than a third of new car revenue coming from premium luxury for AutoNation, it looks exposed to people trading down to a cheaper brand, or just not buying at all.

Savings rates soared in the US since COVID-19 because when economic uncertainty strikes, consumers tend to pull back spending. The long-term impact of this crisis remains to be seen, but with so many people out of work, and so many others presumably worried about losing their jobs, it seems quite reasonable that people would pull back on huge purchases like cars. That doesn’t mean AutoNation’s business model is impaired, but it does mean, in my view anyway, that we need to account for what is likely to be lower demand for new and used cars for some time.

AutoNation has taken steps – as you’d expect – to protect its profitability in these uncertain times. These steps include eliminating thousands of jobs permanently, which should help save SG&A costs and improve margins. The impact of what works out to be ~10 jobs cut per dealership, on average, remains to be seen, but hopefully AutoNation’s customer experience doesn’t suffer due to fewer staff on hand.

READ ALSO  International Seaways: Either A Bargain Or A Value Trap (NYSE:INSW)

Analysts expect the impact of lower sales volume this year to crimp earnings by more than 30%.

That seems quite reasonable given unit volume was down for AutoNation in Q1 by nearly 10%, which is a huge mountain to climb to get back to normalized levels. I don’t think this will happen overnight, and therefore believe the company has a relatively long road to recovery.

Indeed, AutoNation earned nearly $5 per share last year, but isn’t expected to see that again until at least 2022. If economic weakness persists from the tens of millions of jobs that have been lost, it may take longer than 2022 to get back to the prior trajectory of earnings. In short, I’m concerned that AutoNation is pricing in a quicker recovery than we should reasonably expect.

Further, the valuation looks pretty full to me at this point.

This view shows the past few years of AutoNation’s PE ratio up to the beginning of 2020, which excludes COVID-19-related valuation changes. The theme here is that AutoNation has generally traded in the area of 10 to 12 times earnings under normal conditions, and shares trade today at 9.3 times next year’s earnings. While that doesn’t make the stock expensive, I’m not sure it is all that cheap, either. After all, the valuation is roughly in line with historical norms, and it certainly isn’t unheard of for the stock to trade at 9+ times earnings. In other words, it looks to me like AutoNation is already trading with a normalized earnings multiple during what is anything but a normalized operating environment.

The problem is that in order to buy the stock today with what looks like a full valuation, you have to believe earnings will recover quite quickly, which is something I’m not willing to do for all the reasons I laid out above.

The easy money has already been made with AutoNation, and I think the stock is pricing in a full recovery in earnings in the next year or two, which leaves the stock exposed to downside risk. While I’m not bearish on AutoNation, I have to think there will be at least some lasting impact on auto sales as a result of COVID-19 economic weakness, and I don’t see that priced into the stock. Therefore, I think investors should consider taking the $39 the market is offering for AutoNation and either waiting for a lower price, or finding somewhere else to put that money.