Carlos Tavares’ quest to change the way cars are sold began when he tried to buy a ping-pong table for his Portuguese country home.

The chief executive of Peugeot owner PSA went into a store and asked to buy an exact replica of the table on display sitting outside.

“I went to the sales person and he made the online selection of that store — I realised it was the same process that I could have enjoyed at home,” he told the Financial Times.

PSA has now copied the model, rolling out direct online car sales to customers, aiming to deliver more than 100,000 cars straight to customers’ homes without them ever entering a traditional showroom.

The industry’s flirtation with internet retailing has been turbocharged by the Covid-19 pandemic, when would-be customers spent lockdown trawling car websites, as showrooms were forced to close.

As consumers begin spending again, albeit slowly, manufacturers are grasping at the chance to bypass their expensive dealership networks and forge direct relationships with buyers.

The world’s largest carmaker is using its foray into electric vehicles to drive a simultaneous online push, in a multipronged attack on industry pioneers Tesla.

VW’s flagship electric car, the ID. 3, is due to be delivered to customers from September, the first of at least 75 battery-powered models coming down the line over the next decade.

Spurred on by the changes wrought by the coronavirus pandemic, VW is also using the ID. 3 to transform the sales model that has underpinned most of the car industry for decades, and putting an end to haggling in the process.

Instead of allowing dealers to set their own prices, in what is known as the franchise model, VW will sell the ID. 3 at a standardised price in Germany, regardless of whether it is purchased from a physical branch or online.

The Wolfsburg-based company hopes to employ this “agency model”, in which Volkswagen sets the price centrally, for all the upcoming electric vehicles in its ID range, paying a commission to dealerships merely to deliver cars to customers.

German rival Daimler is following suit. The Mercedes-Benz maker, which already employs the direct sales model in South Africa and Sweden, is rolling it out in Austria next year, and intends to continue to expand in other countries, including Australia.

“By 2025, 25 per cent of our passenger car sales will be made via online channels,” said Daimler sales boss Britta Seeger. The company, she added, was investing a “triple-digit million-euro amount” in streamlining the shopping experience, and building so-called digital dealerships.

Previously, Ms Seeger explained, car buyers used to visit dealerships up to eight times before they purchased a vehicle. “Now it’s more like only up to two times, because they research online beforehand,” a trend accelerated by Covid-19.

In Germany, the number of daily visitors to Mercedes’ sales websites increased by 70 per cent between April and June 2020, she added.

This puts the pressure on retailers to make radical changes as more business moves online.

In order to survive, “your service needs to be stellar”, warned Mr Tavares, who said dealerships had to justify their share of industry profits by leaving car buyers satisfied with their experience.

“The least [dealers] could do is make customers happy,” he said.

While dealerships, who make the bulk of their profits from repairs and aftersales services, have tried to respond to changing demands, Mr Tavares urged them to weather the coming changes by becoming more efficient.

“These are independent companies with which we have contracts, they can move, they can be agile,” he added.

“There is no reason why the distribution networks could not adopt the same approach [as carmakers]. They will be faced with the same Darwinian reality as everyone else.”

Dirk Weddigen von Knapp, president of an association that represents 2,000 Volkswagen and Audi dealers in Germany, said his members were loath to take on the risk of selling the ID. 3 via the franchise model, as little is known about how robust electric vehicles are, and for how long they will retain their value.

“That’s why we said we don’t want to take on any risk.”

“We differentiate ourselves through performance and service,” he told the FT. “And we are the partners close to the customer, we don’t need to differentiate.”

What is more, dealers will be relieved of the cost of marketing, Mr Weddigen von Knapp added, which is done centrally by VW, and will no longer have to advertise bargains.

“When you buy a Tesla, you cannot negotiate the price, you have to accept the price that Tesla makes,” he said. “We thought that was good.”

The electric carmaker’s approach to retail — selling directly online and through glitzy showrooms in shopping centres rather than independent dealerships — has run into barriers in certain US states, where manufacturers must by law use established dealer groups.

“Some of the logic that we can apply in some other markets were not applied to the US,” said Daimler’s Ms Seeger, while VW’s Mr Stackman said direct sales in the US would be “almost impossible” legally. 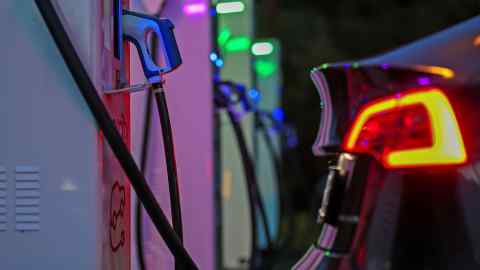 “The US will come when the dealers finally will want to join the bandwagon themselves,” he said. “So it needs to be a pull rather than a push.”

But the potential for growth outside of the small number of protected markets is huge, and one reason VW is not limiting its direct sales strategy to electric vehicles or Germany.

“Obviously the next step is to roll it out to the entire sort of portfolio,” Mr Stackmann told the FT. In the coming months, dealers in a few European markets will adopt the agency model — at their request, he said.

However, Mr Stackmann has long maintained that VW is many years away from following Tesla’s lead, and cutting out dealers altogether.

“During their Volkswagen online journey, customers will choose a preferred dealer before making any transaction,” he wrote in an online post in November. “This guarantees that our dealers remain an integral and essential part of our distribution system, benefiting and participating in every transaction.

“And to make it crystal clear: the retail trade will continue to be our most important sales factor for the next 15 years.”

Cutting out dealerships altogether would also remove a fallback for manufacturers needing to meet quarterly targets, who often register cars with dealers in order to mark them down as sold.

If dealerships were to disappear, carmakers would “need to find new ways to stimulate demand — in particular end consumer demand,” said Eric Zayer, a partner at Bain & Company’s automotive practice. “It’s no longer good enough to incentivise importers or dealers to buy a particular model.”

Such messages appear to be reassuring European dealers.

“It won’t change much,” said Josef Harb, an official at the Austrian Chambers of Commerce who also runs two Mercedes dealerships in the country. “The end customer business stays with us.” He said price wars between dealers were a race to the bottom in any case.

“For the next several decades at least, I believe that Daimler needs us to get their new cars on the market. We are the connection to the customers.”

Previous Post“Reasons (Not) To Be Cheerful” – GMO’s Montier On Certainty, Absurdity, & Fallacious NarrativesNext PostSEA of people flows through Minsk as protesters across Belarus march against Lukashenko’s presidential victory (PHOTOS, VIDEOS)