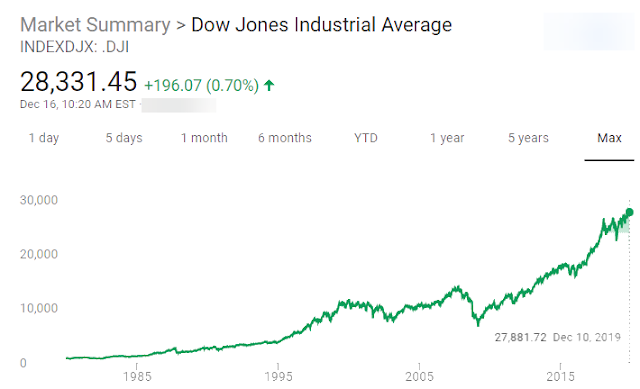 Major US stock indices are trading at record highs this morning. Thus, once again underscoring that Austrian-lites have no deep understanding of Austrian business cycle theory, the stock market or general financial principles.

As I regularly point out, the business cycle is a boom-bust cycle and there is nothing, zero, that always suggests a bust is immediately around the corner.

This is point one that Austrian-lites fail to understand and it just gets worse from there.

I really think many of them have no detailed understanding of ABCT and just jump at headlines to justify their downturn forecasts.

The next event that caused the Lites to go into high panic was the short-lived reversal of the yield curve into negative territory. This absurd panic clearly revealed the lack of understanding of deep financial mechanics.

Although I had regularly pointed out in the EPJ Daily Alert that a yield curve turning negative was a very powerful indicator of recession ahead, when the yield curve turned negative for a short period this year, I explained in the ALERT that the factors causing the shift into negative territory were not the same as in the past and there was no foreseeable recession threat.

Finally, the most recent wail of panic by Lites occurred when overnight rates skyrocketed in September and the Fed had to go in and conduct overnight repo operations (which they continue to do).

The claim was made that the spike in overnight rates indicated there was a major financial corporation in trouble and “that in time we would learn what company it is.”

Of course, no such revelation was made because there was no such company and the overnight funding spike was the result of technical factors that the Fed was able to rapiedly resolve with the repo operations—operations that were a regular event prior to the financial crisis when Bernanke flooded the system with reserves.

Now, the absurd claim is being made that the financial system is about to collapse because the overnight fund market does get volatile at the end of the year. Absurd.

Bottom line: There remains no threat to the economy or stock market headed into the new year, 2020, and it is difficult to see how a recession could occur in at least the first half of 2020. Not going to happen.