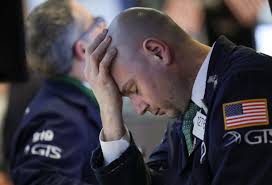 With a couple of down days in the stock market and the yield curve turning negative, I see the Austrian-lites are out in full force.

One commenter writes at the post, US-China High Level Trade Talks Back On:

“Pumping money — especially after a decade of extreme money pumping — can only work so long. The next recession/depression may be devastating, and it may start before the election.”

The start of the down phase of the business cycle is not based on the length of the boom phase. To be sure, the farther along in the boom phase we are, the closer we are to the bust. This is pure logic. But there is zero in Austrian business cycle theory that says the boom phase can’t continue for 15 years, or 20 years or even 25 years if the circumstances are right.

None have ever lasted that long but there is nothing that says they can’t under circumstances of high-productivity gains where price inflation is very low (or even non-existent).

Trump’s trade war is not a positive for the economy but, in and of itself, it will not bring on the bust phase of the business cycle.

For the record, there is no recession currently in sight.

More at the EPJ Daily Alert.