Myanmar voters are expected to return Aung San Suu Kyi and her National League for Democracy to power in Sunday’s second democratic election since the end of military rule.

Myanmar’s ruling party may, however, battle to maintain its comfortable parliamentary majority when it faces an electorate that will be passing judgment on its first five-year term, as well as a more organised opposition. The 2015 election delivered a landslide victory for the NLD.

About 38m people will be eligible to vote, including 5m first-time voters. Citizens older than 60 will be allowed to vote in advance to lower the risk of Covid-19 transmissions after a rise in transmission of the disease. Myanmar has reported more than 1,000 new infections a day in the past few weeks.

It will be competing for votes against 90 ethnic minority and other parties, led by the pro-military Union Solidarity and Development Party, which it defeated in 2015,

“A lot of people will see the NLD as the only choice if they want to continue along with the democratic transition,” said Moe Thuzar, co-co-ordinator of the Myanmar Studies Programme at ISEAS-Yusof Ishak Institute in Singapore.

“Many people don’t want a return of anything that reminds them of military rule.”

However, Ms Thuzar said she expected the party to win with a smaller majority after mergers by ethnic parties.

While Myanmar’s economy was slowing even before Covid-19, the campaign has seen only limited debate on the government’s uneven record on reforming the economy and promoting business.

“Some investors are frustrated that not more has been done, but the sense of continuity will be a good thing,” said Richard Horsey, an independent political analyst based in Yangon. “Businesses are expected to welcome the stability of a new NLD government.” 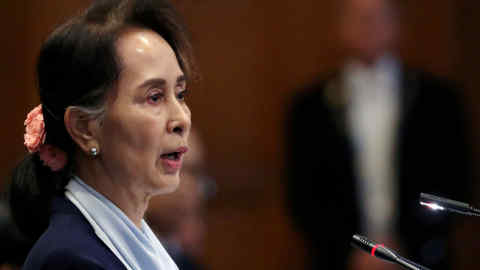 Under Myanmar’s constitution, 25 per cent of parliamentary seats are reserved for the military, meaning the NLD needs to capture a significant majority if it hopes to hold on to the presidency, which is elected by MPs. A new parliament is due to convene in February 2021.

Min Aung Hlaing, the powerful army chief, this week made a rare public remark to accuse the government of making “unacceptable mistakes” ahead of the election.

Aung San Suu Kyi, though a controversial figure outside Myanmar, has solid support at home, including her decision last year to defend the country in a genocide case being heard by the International Court of Justice in The Hague.

The case was brought by the Gambia in response to the military’s deadly crackdown in 2017 on minority Rohingya Muslims in Rakhine state.

Human rights groups have raised concerns after the country’s election commission last month cancelled voting in conflict areas, including much of Rakhine, and several Rohingya candidates were disqualified from running. Rohingya remaining in Myanmar, most of whom are barred from holding citizenship, will be unable to vote.