The AUD/USD currency pair, which expresses the value of the Australian dollar in terms of the U.S. dollar, tends to correlate with global market risk sentiment. This positive correlation has held up recently, as shown in the chart below, with AUD/USD falling alongside the drop in U.S. equities (as measured by the S&P 500 equity index).

In the chart above, the daily candlesticks illustrate AUD/USD price action, while the blue line represents the S&P 500 index. Notice that the recent rise in equities has once again correlated strongly with Australian dollar strength against the U.S. dollar.

Equities tend to rise on the back of optimism in future global economic growth prospects, while Australia is an important exporter of commodity products. When economic growth prospects are viewed as improving (or alternatively, when prospects are being viewed as better than previously expected), international trade expectations are also generally expected to improve on the back of this implied growth.

Economies such as Australia benefit from international trade, thus the demand (and price) for AUD tends to rise with optimism in global growth and trade expectations. The graph below indicates some of Australia’s top exports: 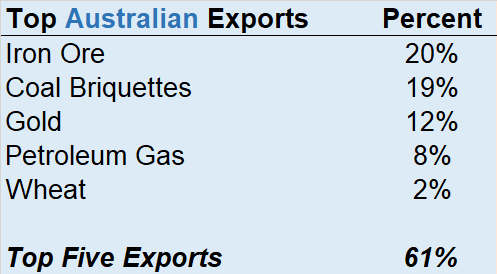 (Chart created by the author using data from the Observatory of Economic Complexity.)

Iron, coal, gold, gas and wheat are some of Australia’s top export categories. We can see from the chart below that AUD is roughly correlated with the gold price too; something I alluded to in a recent article, in which I was able to rightly predict that a gold resurgence would help to support AUD.

However, the Australian dollar’s strength is likely to struggle going forward; gold will certainly not be able to single-handedly save AUD/USD from falling. Notice from the above chart that the gold price is making higher highs, while the Australian dollar is still mostly languishing (notwithstanding the recent improvement).

AUD/USD also tends to correlate with oil, but as we can see from the chart below, oil is languishing too (even more so).

In this author’s view, it is likely that markets are under-pricing the true ramifications of the significant economic fallout which is already occurring worldwide (resulting from lock-downs surrounding the coronavirus pandemic). Perhaps the oil price is closer to the truth than other markets; however, oil could arguably trade much lower; having said that, it could find support on the back of renewed talks and progress to scale global production back.

This is what many politicians miss. Eventually, the cure (or treatment) starts to look a lot worse than the disease itself. This is a controversial argument, as it is naturally difficult to defend reopening up the parts of the global economy that are on lock-down too early, as this would naturally encourage the spread of COVID-19. This would then put many lives at risk, as vulnerable populations would likely contract the disease and possibly die; and what is more valuable than human life? You cannot put a price on it.

We will nevertheless pay a price for these lock-downs, or rather continue to. The concept of hysteresis is relevant; the idea that a significant, initial impact causes a long-lasting drag on economic output versus potential output.

You can switch a computer on and off without a problem, but a computer is not a complex system. A computer may be complicated, but it is not a complex system like an economy. Closing businesses and reopening them changes the structure of the system itself, both acutely and in the longer term. Feedback mechanisms come into play. Further, no amount of government stimulus will save businesses from a demand problem. If people are indoors and not spending, certain businesses will not be able to survive, especially those that are heavily leveraged.

Take, for instance, the roughly $3 trillion of U.S. stimulus. U.S. GDP was $21.4 trillion in FY 2019. The $3 trillion represents about 14% of U.S. GDP (at this 2019 baseline). Therefore, should U.S. GDP take a hit of more than 14% (which is absolutely conceivable, given the scope of this crisis), the stimulus is actually still deflationary. The scope of this crisis is so large because it has created a demand-side problem; it is not simply a liquidity problem that central banks can solve. Even adequately-reserved companies with no debt could struggle to recover, and many owners may even decide to close their companies rather than see through several quarters of losses.

No matter what policy we take, damage has already been done. Since we could probably fairly argue that this crisis is unprecedented (like the many crises before it), predictions are not valuable. What we do know though is that there is an extremely high probability that this will cause a recession, and that the real question is how long this will go on for.

READ ALSO  Sleep Like A Baby: Buy These Baby Bonds, Yields Up To 9.6% (NASDAQ:HCAPZ)

Commodity currencies such as the Australian dollar stand to weaken against the U.S. dollar, which is typically viewed as a safe-haven in times of global turmoil. Investors are unlikely to flood into AUD FX crosses amidst a global pandemic and financial crisis. Independent of the scale of U.S. stimulus, currency prices do not tend to move in a logical fashion per supply (or the quantity available); they typically move based per demand and confidence. In the case of USD, global investors will likely feel safer holding U.S. dollars than so-called commodity currencies.

Markets have become a little complacent in recent weeks; however, this author does not believe that a bull market has returned. The recent retracement to the upside is unlikely to sustain itself in the short to medium term, as the reality of the economic fundamentals will catch up to investors. We should expect to see sentiment shift to favor the downside soon. If or when this occurs, risk-on FX crosses like AUD/USD are likely to drop and make lower lows.