The AUD/JPY currency pair, which expresses the value of the Australian dollar in terms of the Japanese yen, typically correlates positively strongly with market risk sentiment. The Australian dollar, or AUD, is associated with risk-taking activity (especially as Australia is a key exporter of commodities), while the Japanese yen, or JPY, is viewed as a geopolitical safe haven (owing to Japan’s relative political stability and current account surpluses).

In addition to the conventional factors that govern AUD/JPY, the positive correlation between the pair tends to find additional support and longevity as a result of a self-fulfilling prophecy, in the sense that FX traders will often buy AUD crosses and sell JPY crosses to express their risk-on or risk-off sentiment.

The daily candlestick chart below shows AUD/JPY price action, including a Fibonacci retracement tool which indicates that the recent retracement to the upside (to the 69 handle) matches the key 61.8% retracement level (using some recent key price points).

The Australian dollar has been falling consistently against both the U.S. dollar (or USD) and the Japanese yen. Recent moves, including the significant drop that started in late February 2020 and continued into March, as well as the subsequent retracement to the upside from late March through to present, correlate positively with the direction of global equities.

As shown in the chart below, both AUD/JPY and U.S. equities (using the S&P 500 index as a proxy for U.S. equity performance, illustrated by the blue line) have retraced to the upside after significant falls. In this author’s view, the recent rises are unlikely to be sustainable. Downside should be expected in the short term.

As discussed in a recent article, the world is currently facing significant and frankly unprecedented economic challenges. These challenges result not from COVID-19, but from government measures to tackle COVID-19. The question of whether they are the right measures is a question of not only economics but morality, and therefore perhaps philosophy. A trade-off had to be made, between saving lives or preserving the economy.

In fact, the problem has not been quite so clear as this, as clearly lives would have been lost and the economy would have taken a hit regardless of policy. However, there is certainly a spectrum-like trade-off. I have created the chart below, which I believe articulates the main trade-offs here. 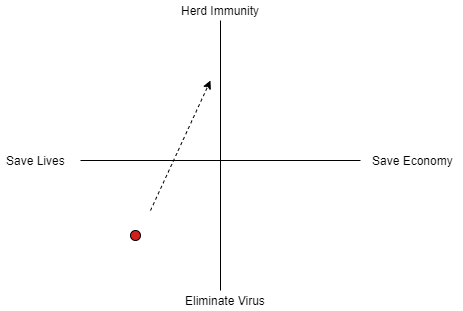 Thus far, it appears that government policy has been geared aggressively towards saving lives and even an attempt to eliminate the virus through self-isolation and quarantining of both infected and uninfected individuals, as well as widespread lockdowns. Although the lockdowns are branded as attempts to “flatten the curve” (reduce the number of infected people per unit of time, to lessen the burden on public health systems), the implementations thus far are substantially close to those that would be applied if we were seeking a total eradication of the disease.

Marked by the red dot in the chart above is where I think we and our governments are, philosophically. The arrow represents where I think we will collectively move towards. The media has put significant pressure on governments to implement lockdowns and save lives. The media is important as the media are supposedly there to inform us. The media directly affects the collective opinion of the electorate, and naturally politicians must act to serve and satisfy the electorate. I think it will become increasingly clear that COVID-19 cannot be stopped, and that herd immunity must be achieved.

This is because COVID-19 is a contagious respiratory virus which has already become a pandemic. Unless we are lucky, the virus is likely to continue to spread until a certain degree of herd immunity has been achieved. Lockdowns may slow the spread, but re-opening the economy will only open the way for further spread, and hence nature must run its course.

Besides natural spread and/or a variolation strategy (i.e., deliberately infecting healthy patients with a small exposure to the virus, to promote immunity), we can also look to vaccine development. However, while I do expect a narrative shift away from current approaches to more herd-immunity, pro-economy strategies, politically this shift will take some time to occur (before people become supportive).

The “narrative shift” may require more businesses to shut and more people to lose their jobs, before the world starts moving firmly in the alternative direction. This alternative direction is likely to be bullish for risk sentiment, and thus AUD/JPY. However, the shift will take time, and in the meantime economic data will continue to be disappointing. Even after a shift in strategy, volatility is likely to remain elevated.

In effect, some damage has already been done, and further economic damage will be done, before we start to “turn the economy back on” and move forward. Ultimately, we should not bet against humanity; this entire ordeal will most likely set ourselves up for a significant bull market. However, I do not believe that it is the time to be bullish quite yet.

It is interesting that AUD/JPY has maintained its correlation with the recent rise in equities. This does suggest that global investor sentiment has in fact improved (i.e., the FX world is “confirming” the move in U.S. stocks); a divergence would be more concerning. Nevertheless, it is likely that the recent move is misguided.

The sharp retracement to the upside (in both stocks and risk-on FX crosses) suggests that the previous bullish sentiment which has characterized the longest bull market in history is still alive. Before we get another bull market, I believe we will see more downside volatility, as markets are due to more appropriately price the ongoing damage and risk presenting to the global economy and financial markets.

In this regard, this author expects to see lower lows in both U.S. equities and particularly AUD FX crosses, including AUD/JPY.