AUD/JPY: Likely To Revert To The Upside

The AUD/JPY currency pair, which expresses the value of the Australian dollar in terms of the Japanese yen, has recently fallen after tepidly yet nevertheless succeeding in exceeding its 2020 high of approximately 76.50. In a recent article of mine, I suggested this was a level at which AUD/JPY was likely to correct, considering multiple factors, but most importantly that while risk sentiment was proving positive, U.S. equity volatility was indicating a greater-than-average chance of rising on the back of apparently excessive optimism.

The chart below illustrates AUD/JPY price action, using daily candlesticks. I use the same chart template as used in my prior article; evidently, my first target has been reached already (of approximately 73.65). My second target of 70.70 was not a target I predicted to be achieved in a ‘base case’, but it nonetheless still remains in full view.

The question now becomes, will AUD/JPY trade lower, or will risk sentiment revert back into the positive direction? The latter seems more likely. Risk sentiment remains strong. The trend is clearly currently in favor of upside across global financial markets at present. While certain safe-haven commodities such as gold are also holding up (gold prices are currently averaging around $1,700/oz; little changed over the past few weeks), as we saw in March 2020, the correlation between true risk sentiment and commodities such as gold is tentative at best.

Our primary focus should be on equities. As discussed in my previous article on AUD/JPY, I believed that VIX was likely to rise, following especially subdued levels (as the volatility of VIX itself was also falling measurably). The chart below illustrates the recent surge in the Volatility Index to well over 40.

The chart above additionally includes Bollinger Bands, as I used in my previous article. This 20-day, two-standard deviation trailing measure of volatility (of VIX itself) enables us to monitor points at which volatility is more likely to rise or fall.

As you can see on the chart above, however, periods of high volatility (such as through late February and early March 2020) usually self-propagate until ‘exhaustion’, at which point volatility finally settles. Predicting the so-called ‘right tail’ (of the frequency distribution, conceptually speaking) is difficult, but the ‘left tail’ (on the downside) is easier to predict since volatility can only fall so far (where VIX has theoretically no limit on the upside).

Nevertheless, a useful rule of thumb is that for every 16 points on the VIX index, the options markets (upon which the VIX is based) are implying a daily move of approximately 1% in the S&P 500 index. You can ‘prove’ this by multiplying 1 percent by the square root of 253 (roughly the number of trading days in a given year) for an annualized measure of 15.90 (or about 16%).

While implied volatility (which is what VIX is) does usually tend to be higher than realized volatility, we can at least use this method to estimate the current VIX level of about 36 (at the time of writing) to be indicating daily moves (in the S&P 500 index) of well over 2%. For context, the table below shows the trailing 40 trading days of daily percentage moves in the S&P 500 index (see the far-right column). 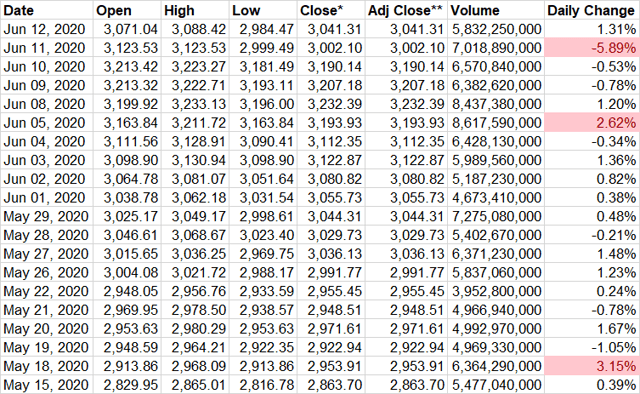 The far-right column highlights in red those days that exceeded the 2% mark. As you can see, the VIX can pick up dramatically in short bursts, on the back of sudden and “unexpected” bursts in realized volatility. However, while the sudden drop of -5.89% on June 11, 2020 was unexpected by many, and deep, this was followed by a rise of +1.31% the next day, and the average daily price move (in absolute terms) over the past 9 trading days is in fact +1.65%.

While this recent drop will remain in sight for a while, I believe that this recent correction was in fact predictable, broadly speaking (see my previous article). The extent of the volatility could not be predicted, but the increase was, because the market had become too one-sided (again, I relate the metaphor of a crowded room all reaching for the single-door exit at once). The move was not based on a sudden change in the market’s perception of underlying fundamentals. The difference between future realized volatility and current implied volatility is likely, I predict, to underwhelm the current VIX level.

Therefore, going forward, I expect VIX to gradually grind lower to between 20 and 30. This is likely to complement a rise in equities, and therefore AUD/JPY (which is a risk-on pair). The beauty of AUD/JPY is its ability to often predict the future direction of the S&P 500. As AUD/JPY recently fell off its 2020 high, the beginnings of this move occurred prior to the recent correction in equities.

As we saw on June 12, 2020, the market was, however, able to push equities higher following the recent correction, which is an indication that “balance has been restored to the force” (to unaccountably use a Stars Wars phrase). Provided that the fundamentals do not change significantly over the next trading week, and/or market liquidity does not deteriorate significantly (no signs suggest it is worsening beyond the recent move), a safer bet is to count on a reversal to the upside in line with the current trend and largely prevailing sentiment.

In summary, I believe AUD/JPY has recently served its function as a hedge against downside volatility in risk markets. I do not propose to be able to predict the future, and unforeseen events may arise next week (and beyond) that invalidate the trend. However, my personal bias moving forward is cautiously bullish (on both AUD/JPY and equities).

I will leave with a final point, that it is interesting that during this recent (but relatively minor) ordeal in equities and AUD/JPY, the one-year interest rate spread for AUD/JPY (i.e., between one-year government bond yields, reference Australia and Japan) in fact rose. This is the bond market’s way of saying that the equity downside was limited to short-term trading factors (excess optimism, etc.), not to fundamentals. If the one-year spread had fallen (i.e., in favor of the Japanese yen), it might have suggested that markets were more broadly pricing in economic risks, but this did not occur for AUD/JPY.

As shown above, AUD/JPY fell as the one-year spread traded upward (and then horizontally), from +0.412% to +0.446%. At best, it rose, and at worst, we could say it was unaffected. In support of my general bias, I believe that risk sentiment should return in favor of the current trend, which is positive. While I could of course be wrong, I believe this is the more probable path forward.