In February 2020, Seaspan completed the reorganization in which it became a wholly owned subsidiary of Atlas Corp. (ATCO). Holders of Seaspan common and preferred shares became holders of Atlas common and preferred shares, as applicable, on a one-for-one basis, maintaining the same number of shares, ownership percentage and associated rights and privileges as they held of Seaspan immediately prior to the reorganization.

With this buyout of Seaspan, ATCO is now the world’s largest container vessel lessor. Its fleet is comprised of 123 vessels of varying capacity, with contracted revenue to $4.6 billion and a weighted average remaining lease period of approximately four years.

Seaspan was one of the first vessel owners to emphasize long-term contracts, a business model which has been adopted widely in the shipping and pipeline industries, since it makes it easier to project cash flows. Seaspan has long-term contracts with seven leading customers that control ~80% of the world’s container shipping.

ATCO has five series of preferred shares, and all of them are selling at discounts to their $25.00 call values. The D, E, G, and H shares are all fixed rates, while the I shares have a hybrid future floating rate feature, based upon the three-month LIBOR rate.

Like most other interest rates, the 3M LIBOR rate has crashed – it’s down to just .31% currently, which would give the ATCO-I shares an equivalent yield of 6.38%, if that were to be the rate after their 10/30/2023 call date, when the floating rate starts.

The ATCO-H shares and these other preferreds all go ex-dividend on ~7/24/20. They’re on a Jan/April/July/Oct. schedule. The H shares currently yield 8.99%, very similar to the D, E, and G shares, while the I shares yield 9.59% – the market is discounting them due to the floating rate. 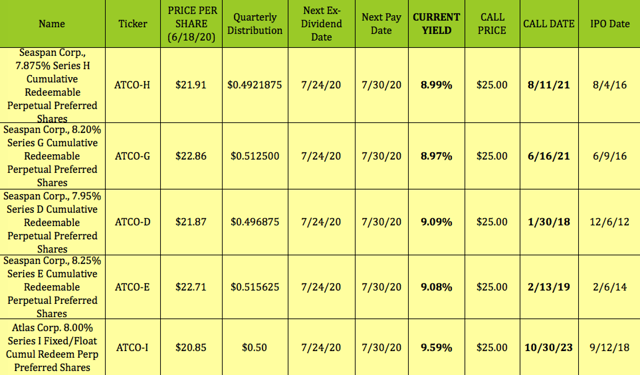 In addition, these are cumulative shares, so management would have to eliminate the common dividend if they skip any preferred dividends. They also rank senior to the common in a liquidation scenario. 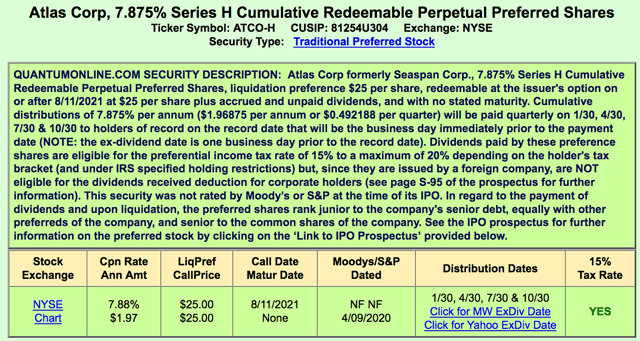 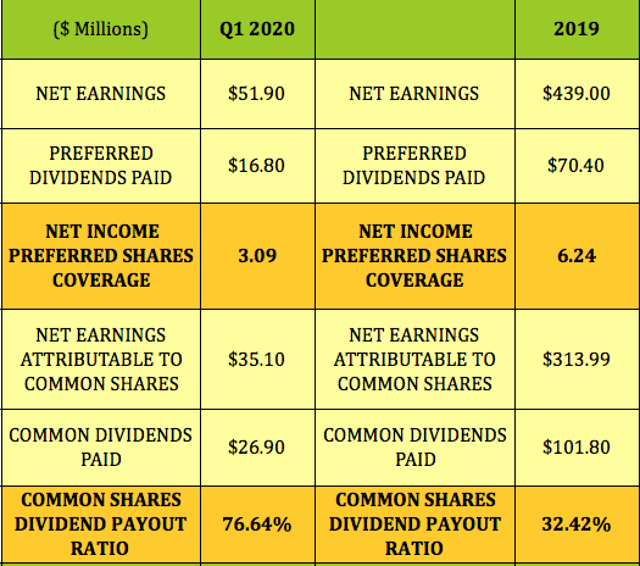 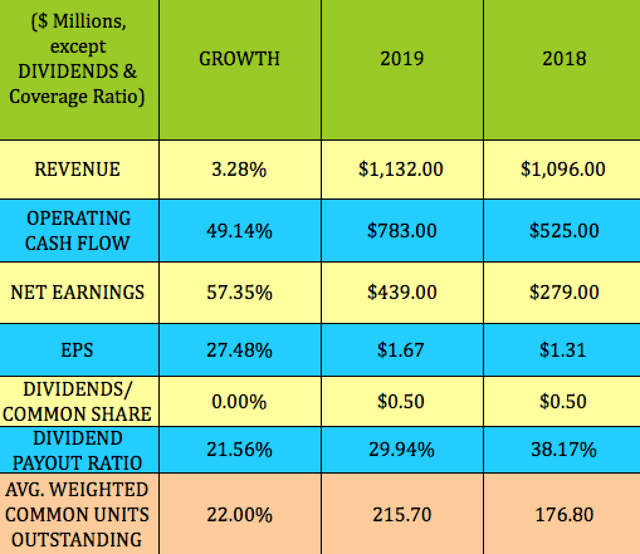 However, like many companies, Q1 2020 earnings weren’t quite as upbeat. Although revenues increased by 8% to a record $308M, operating cash flow was nearly flat, while net earnings took a comparative nosedive vs. Q1 ’19.

But there was a one-off event in Q1 ’19 – Seaspan modified its time charters for seven vessels with one of its top five customers, rechartering them to another customer, for which it received a $227M payment.

Adjusting for that one-off item shows an -11% decline in adjusted earnings in Q1 ’20: 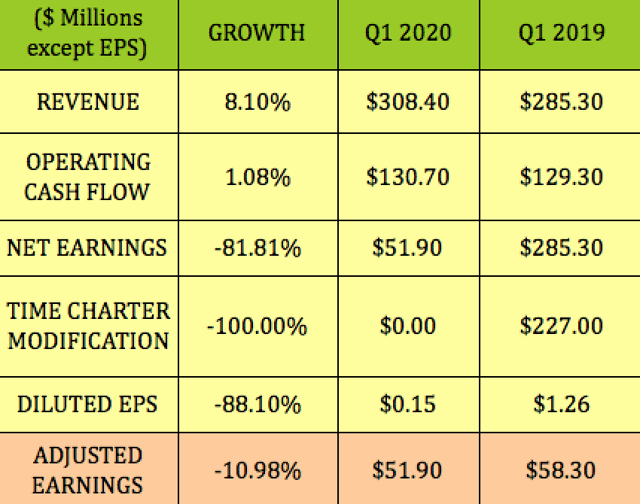 Seaspan has had a remarkably steady, high fleet utilization over the past 9 quarters, averaging ~98.5%, and ranging up to 99.6%. Q1 ’20 was at 97.9%, but still not too far off of the average. Its long-term contracts serve to support fleet utilization:

The APR Power segment’s utilization was up slightly in Q1 ’20 vs. Q4 ’20, but appears to have some seasonality, with Q2 and Q3 experiencing higher percentages.

Management extended the term of six charters from four to 10 years in Q1 2020, and “entered into agreements to purchase four 12000 TEU vessels for an aggregate $367 million in cash. The four vessels, two of which were delivered in March and two of which were delivered in April 2020, are comprised of three 2018-built vessels and one 2017-built vessel. In connection with these deliveries, Seaspan has closed four innovative financing arrangements with total proceeds of approximately $340 million, in partnership with a leading financial institution. Each financing has an initial term of ten years.” (Atlas site)

“In February 2020, Atlas acquired APR, a global leader in fast-track, mobile power solutions, in an all-stock transaction valued at $750.0 million, including the assumption of debt, for equity consideration of approximately $337.9 million, after purchase price adjustments identified to date and before considering contingent considerations of $41.5 million. APR is a global leasing business that owns and operates a fleet of specialty assets (gas turbines and other power generation equipment) that provide power solutions to customers including large corporations and/or government backed utilities.”

“In March 2020, APR signed contracts for 265MW of peaking power gas-fired plants in Mexicali, Baja California, Mexico. In addition to supporting high demand needs during peak hours, the eight mobile gas turbines installed at the plants will help ensure grid stability as the region adjusts to a recent decrease in energy imports received from California.”

With the addition of the new vessels to the fleet, management raised 2020 revenue guidance by $15 to $30M. The APR assets are expected to bring in an additional $190M to $220M in revenue for 2020. If the company achieves these figures in 2020, we should see preferred dividend coverage return to a higher factor than in Q1 2020.

ATCO’s common is selling at a cheaper P/E than broad shipping industry averages, while its seemingly low price/book is equal to the group average. Its 6.7% dividend yield, while attractive, is lower than the 8.5% industry average, which isn’t a new development – in general, the market demands high dividend yields from the shipping industry, due to its boom and bust cycles.

ATCO’s ROA and ROE may look skimpy, but they’re actually much better than broad shipping industry averages – these two metrics can often run into the negative, due to the high depreciation and amortization costs in the ship-owning industry. ATCO’s 40.83% operating margin is miles ahead of the broad averages, while its debt/equity leverage is much lower.

Seaspan always had good access to the capital markets, and this has continued in Q1 2020, with Seaspan and APR arranging several financings:

“In February and March 2020, Seaspan increased the committed amount under the vessel portfolio financing by $100 million to a total size of $1.755 billion.”

“In February 2020, APR entered into a credit agreement with a syndicate of lenders for a $185.0 million credit facility, comprised of a revolving credit facility of $50.0 million and a term loan facility of $135.0 million. This facility is secured by certain mobile power generation assets and the proceeds of borrowings thereunder were used to refinance existing debt.”

“In March 2020, APR entered into a $100 million fixed rate term loan credit facility with BlackRock. This facility is secured by certain mobile power generation assets and the proceeds of the term loan were used to refinance existing debt.” (Source: ATCO site)

As of March 31, 2020, Atlas had total liquidity of $393.7 million, consisting of $213.7 million of cash and cash equivalents and $180.0 million of availability under undrawn committed revolving credit facilities. It had 30 unencumbered vessels in its fleet. 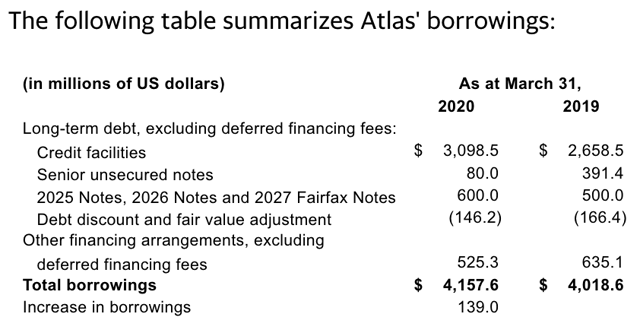 All tables by Double Dividend Stocks, unless otherwise noted.

We scour the US and world markets to find solid income opportunities with dividend yields ranging from 5% to 10%-plus, backed by strong earnings.

We publish exclusive articles each week with investing ideas for the HDS+ site that you won’t see anywhere else.

We offer a range of income vehicles, many of which are selling below their buyout and redemption values.

Disclosure: I am/we are long ATCO.PH. I wrote this article myself, and it expresses my own opinions. I am not receiving compensation for it (other than from Seeking Alpha). I have no business relationship with any company whose stock is mentioned in this article.

It’s a separate service from our Seeking Alpha Hidden Dividend Stocks Plus service.

Disclaimer: This article was written for informational purposes only, and is not intended as personal investment advice. Please practice due diligence before investing in any investment vehicle mentioned in this article.