Athene: The Dislocation In The Financial Industry Has Exposed A Secret Gem For Investors To Find (NYSE:ATH)

Home Financial news Athene: The Dislocation In The Financial Industry Has Exposed A Secret Gem For Investors To Find (NYSE:ATH)
2020-06-042020-06-04By finanz.dk

It’s incredibly difficult to seize an opportunity to timely invest in a company that is winning. I personally find it a much more prudent strategy to cleverly follow an industry down to hell and pick the potential champions as long as the financials remain strong. The financial sector has undoubtedly been bleeding due to COVID. This dislocation has opened up a plethora of opportunities with dozens of great companies trading far below their book values.

Some of the dislocations in the financial industry right now are undeserving due to exaggerated earnings losses caused by a reporting of unrealized earnings losses. Unrealized earnings are not an important feature of financial reports in the short term and amid high market volatility. Some of the biggest peddlers of these exaggerations are mainstream financial news institutions. This exaggeration can clearly be seen in headlines such as “Buffet’s Berkshire posts $50 billion loss as coronavirus causes pain” written by Johnathan Stempel at Reuters. However, deep in the article, the author correctly explains “quarterly operating profit, which Buffett considers a better performance measure, rose 6% to $5.87 billion.”

But perhaps that explanation is a bit less dramatic than the narrative that drives clicks. Obviously, the financial industry is not clear of trouble. There are a lot of over-leveraged businesses with diminishing cash flows and bad credit portfolios. Athene Holding (ATH) is an example of a financial company with the exact financial qualities you would need in a winner of this industry and a company that will not only survive these times but instead takes advantage of it.

The Macro Case for Athene Holding

Athene Holding is a retirement services company that issues, reinsures, and acquires retirement products. They provide several types of annuity products and seek to increase deposits via schemes such as pension-risk-transfer deals. It doesn’t require the stretch of the imagination to understand how that business model may be beneficial in current COVID circumstances. After some of the greatest market volatility since the great depression and decreasing interest rates, it is reasonable to expect that investors may want to pursue safer retirement options. Also, with many large companies struggling to stay afloat it is possible that more and more companies transfer their internal pension risk on to companies like Athene Holding. In Athene’s quarterly transcript calls Bill Wheeler, president of Athene, states:

…retail annuity and flow reinsurance businesses combined to generate more than $2 billion of deposits in the quarter, but it’s worth highlighting that we observed more than half of these sales in March alone amid recent peaks and volatility.

Current interest rates are also a thing going against Athene. However, Athene has managed to gain tremendous returns besides working in a low-yield interest market. In the 2019 annual results CEO of Athene, Jim Bellardi states his strategy for achieving higher yield with lower risk:

In the low-rate, low-spread environment of the past decade, we have not stretched for yield by investing down the credit spectrum. Instead, we have prioritized risks that are more appropriate for our business model – liquidity and complexity risk. We have aimed to create yield through less liquidity, rather than credit risk, insisting on structural protections and substantial credit enhancement, rather than owning the obligations of underlying issuers outright. In terms of allocation, this means we are definitionally underweight direct holdings of high-yield securities and bank loans. We should have fewer impairments than others who have invested directly in subordinated bonds in the search for yield. However, it also means that we should expect increased mark-to-market volatility in certain less liquid asset classes as forced sellers of these assets enter the market.

Although the market volatility surely impacts other aspects of Athene’s business, it will ultimately drive the core of the business forward.

The Growth Case for Athene Holding

The primary assets of an insurance company are its liabilities related to its insurance products and deposits at Athene have been growing at an incredible pace. At Athene, deposits have grown at a rate of 46% a year since 2015 to $18.1 billion in 2019 and the trend seems like it will continue. Since entering the pension-risk-transfer (PRT) business in 2017, Athene has been able to become an industry leader grabbing the largest market share. Athene has done $10 billion in PRT deals up to date with $6 billion in 2019 alone which was about half of the disclosed PRT market. Although Athene has been capturing a great market share in the PRT market the CEO, Jim Belardi is pessimistic about the growth of the PRT sector in the US market. Similar upward trends can be seen along with their other activities that increase deposits such as flow insurance, funding agreements, and retail insurance. 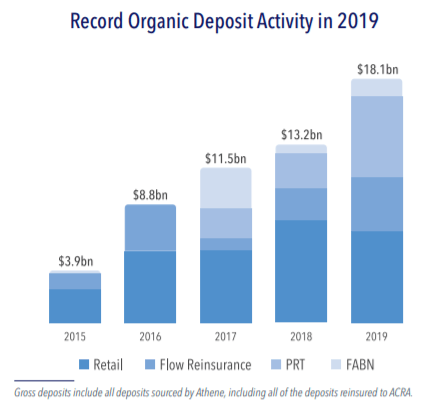 Athene also made its entry into the UK PRT market in late 2019 by closing an $800 million transfer deal. Athene predicts that the UK market will be a strong driver of growth. The PRT market in the UK is much more mature than the US. It is estimated that PRT transfers for 2019 in the UK were worth a record of 40 billion pounds, which is 65% more than 2018 transfers.

Athene has also demonstrated a proven track record of continuous growth in equity far above the industry average. Athene had chosen a really tough year to start their business but they prove that they have the ability to take advantage of market dislocations, which I suspect they will continue to do during this market. While most companies would be playing defense, Athene may be playing offense and has the infrastructure to do it. Because of Athene’s scalability, great growth prospects in other markets, and a proven track record the growth case for Athene is pretty solid. 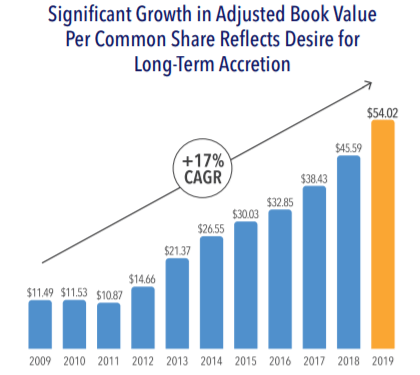 The Value Case for Athene Holding

Athene’s current stock price and overall business make a strong case for its value at this point. The most glaring metric indicating it’s steep discount is its adjusted price-to-book ratio which is around 0.5. A price-to-book ratio of 0.5 can be misleading if the assets are underperforming or overvalued but their assets have fallen only 3% and book value has fallen about 6% amid peak market volatility.

The trailing-twelve-month price-to-operating earnings ratio was about 4 while book value has been increasing at a rate of 17% which means this is a good deal. The company has seen an operating earnings loss of about $108 million this quarter, however, that is after Athene made an investment of about $239 million in Apollo Global Asset Management (APO).

Athene has about $120 billion in net invested assets and in the past year has an average return on assets of 1.115% which is in line with some of the most competitive banks. After all expenses, the company is left with about 7% in adjusted operating earnings.

In spite of my criticism of GAAP net margins, I want to include that here so that you may get a feel for how their investments have held up over time and during the late 2018 market correction. Athene’s net margins this quarter was a loss of slightly over one billion but the management indicated that they typically hold on to their investments through maturity so it should have little impact long term. 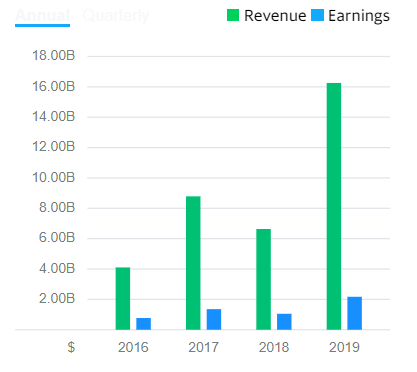 Athene is rated an “A” by credit rating agencies such as S&P, Fitch, and A.M. Best. They have about 2.5 billion in excess capital, 12.5 billion in statutory capital and they have the ability to acquire another 7.5 billion. Their available capital is enough for them to cover their operating expenses. 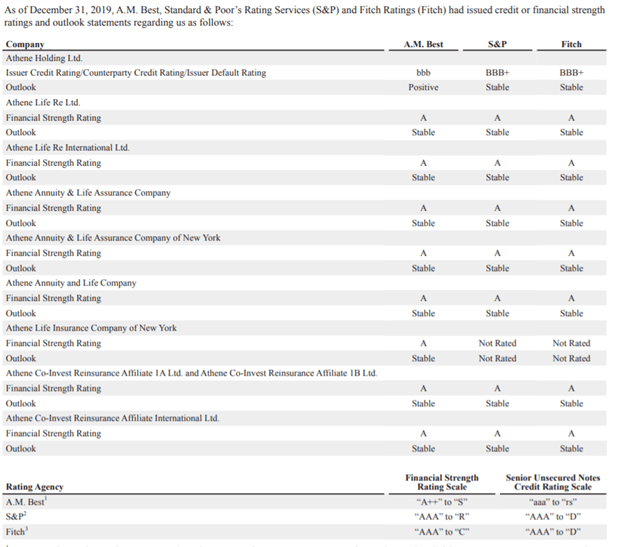 Athene also boasts a very diverse credit portfolio much of it with acceptable risk. Their revenues are split between investment income and premiums with premium covering a majority of the policy expense which would allow them to comfortably maintain themselves through this year.

Besides the rosy picture portrayed by their accounts, share purchases, and history of growth, there is much to criticize their management. The biggest concern anyone should have of this company is their relationship with Apollo Global Asset Management. Apollo is a hedge fund with billionaire co-founder Mark Rowan who was in part responsible for the creation of Athene. His vision was to open up a new breed of an insurance company that operates as a bank with a better investment strategy than typical insurers. Apollo is responsible for handling a lot of Athene’s assets and has been accused by previous Athene board members for “looting” Athene by overcharging on fees for asset management. The arrangement also prohibits Athene from looking for new asset managers for periods of two years starting in 2023. Apollo used to hold about 45% of voting rights in Athene while only holding about 17% of the shares. Apollo set up a company with a misleading name called Athene Asset Management (now called Apollo Insurance Solutions Group AISG) which was handling Athene’s assets and charging them for it. The CEO of Athene also holds a five percent equity in AISG but Jim Belardi argues that the majority of his interest lies in Athene. However, the conflict of interest still exists no matter what he argues.

Some argue this has cost the company in share value by a multiple of three. You can see the effect this had on their stock price as it has barely budged since their IPO, until recently where it fell about 50%. Furthermore, this problem also was preventing them from being listed in major indexes like the S&P.

There have been steps taken to clean up this mess and I believe there has been some progress. Jim Belardi states in 2019 annual results:

Even though Athene’s financial performance and execution have been exemplary, we have unfortunately received little recognition from the market. As we stepped back and observed this dynamic and received feedback from market participants, including many of you, it became clear that our multi-class share structure was preventing us from being included in all relevant benchmarks. Furthermore, it became apparent that the structure could be a meaningful inhibitor to a broader investor appeal over the long term. In October, we jointly announced a strategic transaction with our partners at Apollo to strengthen the alignment between our companies and eliminate Athene’s multi-class share structure. As a result of this important structural change in governance, which was completed at the end of February 2020, Athene has removed any impediments to be included in major stock indices, such as the S&P 500 or MidCap 400. While inclusion could take time and is partially subject to certain technical indicators and committee discretion, Athene would otherwise not be considered without taking this important step.

First-quarter of 2020 Apollo spent over 1.6 billion dollars to acquire about 35% Athene and they also reduced their voting power. Only time can tell if that is just a way to double-dip on Athene or to truly maximize both their potentials. However, I believe now that Athene has taken steps that allow them to be on the S&P 500, so they are now investable. And besides the negative aspect of Apollo’s relationship with Athene, Apollo truly does bring value to Athene with first-class investment strategies as can be seen from historical returns.

Athene’s stock price has dropped by more than 50% due to the pandemic. However, with a compelling history, undervalued price, changes in the corporate structure, and a good investment strategy I believe it is the right time to invest in Athene but also to watch for how the new dynamic of Apollo’s and Athene’s relationship materializes.

Disclosure: I am/we are long ATH. I wrote this article myself, and it expresses my own opinions. I am not receiving compensation for it (other than from Seeking Alpha). I have no business relationship with any company whose stock is mentioned in this article.

Additional disclosure: I am not a financial expert and my article does not constitute financial advice. If you wish to invest in Athene please do so at your own risk