At 132% Of Tangible Book Value, Broadmark Is A Sell (NYSE:BRMK)

Broadmark Realty Capital (NYSE:BRMK) offers short-term, first deed of trust loans secured by real estate on residential and commercial properties. The company was formed in 2010, but has only been publicly traded for a short time. Its portfolio is very small, and the stock has a market capitalization of just $1.4 billion.

The market disruption that took place earlier this year saw Broadmark lose over half its value, but with the recent rally, a significant portion of those losses has been recovered. However, with the company already having cut its dividend, exposure to select geographies in the portfolio, and a yield that I don’t think necessarily compensates for the inherent risks, I think investors should consider selling Broadmark.

All looks well…or does it?

Broadmark, to be fair, has plenty of strong points. The company has a very small portfolio of loans, meaning it can carefully examine each deal before it is undertaken. When loans are made or purchased at scale, there inevitably ends up being some bad eggs in the bunch, but Broadmark is very much small enough, it doesn’t have this problem. That can lead to excellent credit quality. 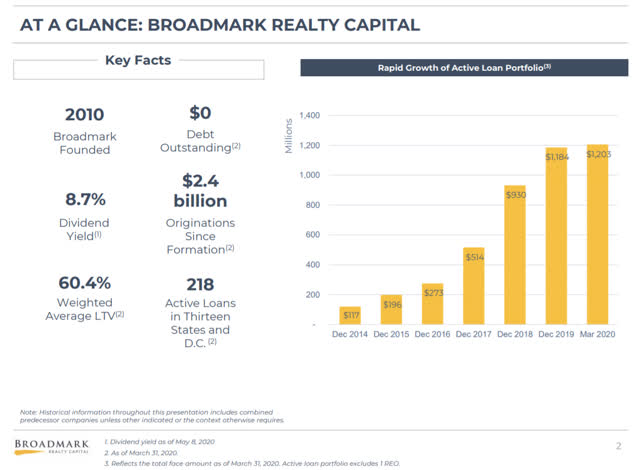 Its loans have a weighted average loan-to-value ratio of just 60%, meaning that if things do go south, Broadmark will have a messy process of trying to extract value from the property, but there is a significant cushion in terms of equity value before losses are incurred.

Perhaps most importantly, Broadmark has no debt. In an industry where debt is cool and some companies try to borrow absolutely as much as possible, Broadmark stands out, and in a good way. This obviously reduces risk because Broadmark isn’t beholden to lenders of its own in case of losses. It also means that if the company does want to take on some debt, it has immense freedom to do so.

To its credit, Broadmark has worked to diversify its exposure in recent years. 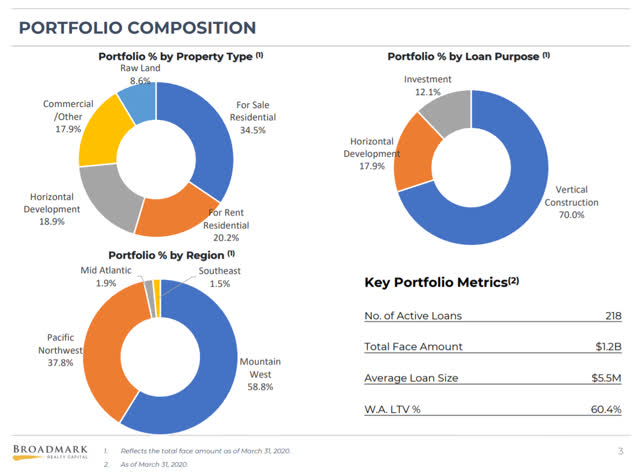 Today, the portfolio is mostly in vertical construction loans, with a small amount in investment loans, and horizontal development, respectively. Most of that is in residential loans, and further, the portfolio is extremely heavily concentrated in Washington state and the Mountain West. This is where I believe it begins to break down for Broadmark.

The company has a specific type of loan it likes to go after, but it is very exposed to weakness in the housing markets in these areas of the country. 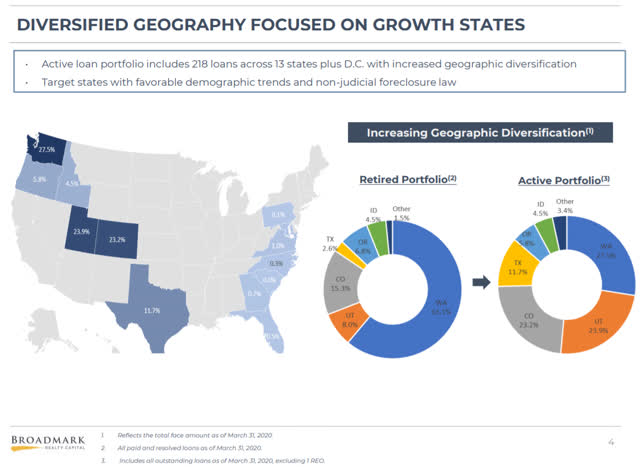 As we can see, the lack of diversification used to be much worse, but today, it is still not what I could call diversified by any means. We know from history that localized housing markets can fare much better or worse than the national averages, so I don’t find this lack of diversification comforting in any way. As I said, progress has been made, but not enough in my view.

We can see the impact of this below in the company’s COVID-19 challenges. 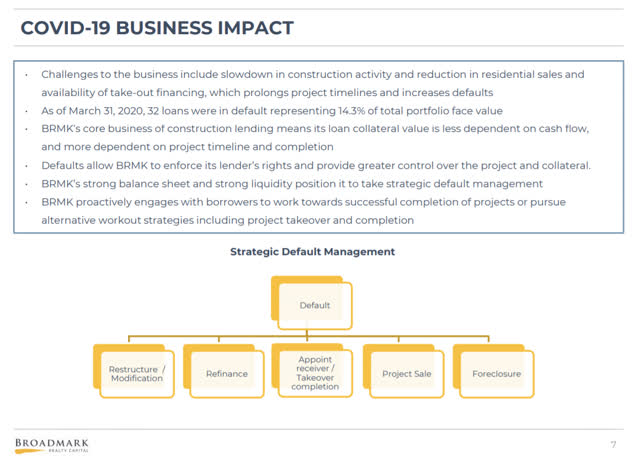 Broadmark has seen a slowdown in construction activity and residential sales, neither of which are good things considering that’s how the company makes its living. In addition, a staggering 14.3% of the portfolio’s face value was in default on March 31st. Given the rebound in activity we’ve seen in the past couple of months, that number may be a bit better today, but that is a huge sum, and should be quite alarming for investors.

Broadmark has ways to work out value from defaults, as I mentioned earlier, and it has done so recently with defaulted projects. The point stands, however, that Broadmark is quite exposed to these risks and that isn’t going to change.

Broadmark had $258 million in cash on the balance sheet and no debt as of the end of the first quarter, so it has enormous liquidity. I’m certainly not concerned about its ability to continue operating, despite its huge number of loans in default at the end of March. Still, with the yield under 7%, I don’t think it is worth a look at these prices.

The dividend is paid monthly, which is great, but it was cut with the May distribution. Broadmark used to pay eight cents per share monthly, but it is down to six cents monthly with the May and June distributions. That doesn’t mean Broadmark can’t raise the payout back up, but with so much risk in the portfolio, one wonders when that may be feasible.

In addition, tangible book value was $1.06 billion at the end of March, and while recovering loan values may have boosted that somewhat since then, shares trade for $1.4 billion today, or 132% of tangible book value. That’s steep in my view, and more than I’m willing to pay given there are so many other REITs trading at or below book value.

While the yield is decent in the world of REITs, I think the COVID-19 crisis is exposing some of the weakness inherent in Broadmark’s model. I also think the stock has rallied too much and that has caused the yield to fall below where I’d think it would compensate investors for the lack of portfolio diversification. Finally, at 132% of tangible book value, which simply backs out a huge goodwill entry on the balance sheet, Broadmark is too rich for my liking. As a result, I think investors should consider selling at this favorable valuation and buy it back when it moves lower.