When AstraZeneca confirmed on Tuesday evening that it had temporarily halted trials of its coronavirus vaccine, the news disconcerted millions around the globe counting on a jab as a route back to normal life.

The pharma group’s measured statement sought to dispel any suggestion that the race to develop a vaccine — the candidate it is developing in partnership with Oxford university is considered a frontrunner — had encountered significant problems.

Pascal Soriot, AstraZeneca’s chief executive, cast the decision as proof of his company’s adherence to “science, safety and the interests of society”. The pause showed the company would follow those principles, he said, as a suspected serious adverse reaction suffered by a UK trial participant was assessed by a committee of independent experts.

But the incident has served as a reminder that the pharma industry is trying to pull off an unprecedented feat: aiming to beat, by several years, the previous fastest development of a vaccine. At the moment, that record is held by the mumps vaccine, which took four years to bring to market.

Despite the anticipation of a vaccine that will arrive and free people from lockdown, history demonstrates there are no guarantees. Overall, vaccines for infectious diseases have about a 33.4 per cent success rate after entering human trials, although this rises to 85 per cent for those that reach phase 3 trials.

There has been an extraordinary scientific effort devoted to finding a vaccine that will prevent Covid-19 or at least lessen the symptoms. The Oxford-AstraZeneca candidate is one of five in clinical trials that use the weakened form of a common type of virus known as adenoviruses. The modified adenovirus delivers instructions for human cells to make proteins on Sars-Cov-2, the coronavirus that causes the disease. This primes the immune system to recognise and attack it.

Another type of vaccine uses RNA, a molecule containing genetic instructions to make viral proteins that is inserted directly in human cells. US biotech Moderna and the partnership between Pfizer and BioNTech are taking this approach for their vaccines and, along with the Oxford/AstraZeneca candidate, are considered among the most advanced.

The pause in the AstraZeneca trial comes as politicians have encouraged the narrative that a vaccine will arrive at “warp speed”, to quote the name of US President Donald Trump’s vaccine project.

Earlier this week Matt Hancock, the UK health secretary, held out hope that the Oxford one could even win regulatory approval before the end of the year, although he suggested the early part of 2021 was more likely.

Some experts said the announcement of the pause will be a useful reality check, emphasising that safety is paramount.

Referring to it at a senate hearing on Wednesday, Francis Collins, the head of the US National Institutes of Health, said: “When we say we are going to focus on safety and make no compromises, here is exhibit A.”

If the trial participant’s illness turns out to be “a real consequence of this vaccine and can be shown to be cause and effect, then all the doses that are currently being manufactured for that will be thrown away. We do not want to manufacture something that is not safe,” he said. 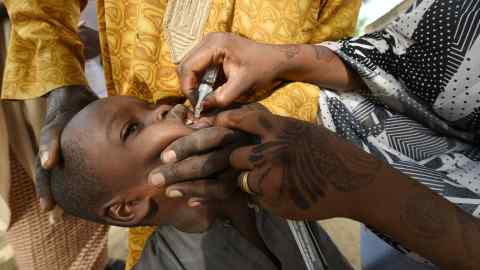 Dan Mahony, co-head of healthcare at fund manager Polar Capital, said the bar for administration of a vaccine can be higher than for other pharmaceuticals because they are almost always given to people who are otherwise well.

The difficulty for vaccine makers is that even clinical trials involving 30,000 people — such as AstraZeneca’s current phase 3 trial — may not pick up rare, but potentially devastating, reactions.

When a swine flu vaccine was distributed widely in 1976 at the behest of then US president Gerald Ford, a small number of cases of a serious neurological disorder called Guillain-Barré syndrome (GBS) were found. The increased risk was about one additional case for every 100,000 people who had the vaccine but the programme had to be halted.

Mr Mahony said regulators were always wary of the one in 10,000 or 100,000 reactions that studies such as AstraZeneca’s would not necessarily pick up. He added: “These are big studies but it is still difficult to pick up those rare events. But one in 100,000 [adverse events] is still pretty important if you are going to be vaccinating up to a billion people.”

That possibility was behind AstraZeneca’s decision voluntarily to pause the trial, he said. “The concern in the back of a regulator and drug company mind for any clinical trial is what about the rare events that statistically we wouldn’t have picked up?”

Scientists emphasised pauses are a routine part of drug development and do not necessarily imply longer term question marks over the efficacy and safety of a drug.

Jeremy Farrar, director of the Wellcome Trust, a research charity based in London, said: “It’s very unusual to go through a vaccine trial and not to have to pause it.” 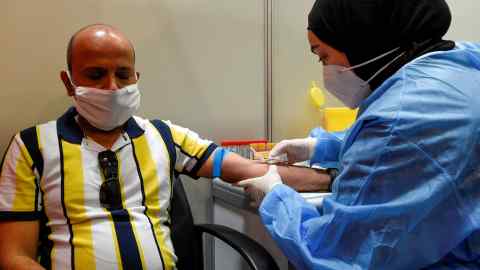 The condition that led the trial to be paused is transverse myelitis, an inflammation of the spinal cord that has a known, but very rare, association with vaccination.

Stephen Evans, Professor of Pharmacoepidemiology at the London School of Hygiene & Tropical Medicine, warned against assuming a link between the participant’s illness and the vaccine.

“When large numbers of people are included in trials, coincidental events can occur and when they are unexpected, then an investigation is required to see if they are just coincidence or a result of the vaccine,” he said.

Analysts and investors largely reacted calmly to the news that the trial was being paused. Peter Welford at Jefferies said temporary pauses were “standard clinical trial practice”. He and his team envisaged “a short-term stock correction which may prove misplaced”, he added.

Describing the muted market reaction to the news — shares closed fractionally up at almost £84 — as “sensible”, Polar Capital’s Mr Mahony argued the fate of the vaccine is unconnected to the company’s broader prospects of success. AstraZeneca has committed to make no profit from the drug during the course of the pandemic.

He said: “I don’t think this vaccine has ever been a financial driver for them. It is more a factor of being a good corporate citizen.”

AstraZeneca’s status as one of the fastest-growing pharma companies in the world stemmed instead from its oncology business, Mr Mahony said.

“This is a company on the up and they have stepped in to do something on Covid from a position of strength.”