AstraZeneca expects results from trials of the coronavirus vaccine it is developing with Oxford university by the end of the year, offering hope in the fight against a rapidly resurging pandemic.

Pascal Soriot, the company’s chief executive, on Thursday said that, if the vaccine worked, AstraZeneca would supply its data to regulators and apply for emergency approval “in as many countries as possible at the same time”.

“It is up to the regulators to decide on approval and how fast they do it is up to them,” said Mr Soriot. The European Medicines Agency and its UK equivalent, the Medicines and Healthcare products Regulatory Agency, are conducting rolling, or accelerated, reviews of this and other vaccine candidates.

The coronavirus pandemic has entered its second wave in Europe, with England and other countries now in their second lockdown. Infections are also rising again in the US.

On Wednesday, the head of the UK’s vaccine task force, Kate Bingham, said AstraZeneca had fallen short of its deal to provide 30m doses to the UK by end of the year.

But AstraZeneca executives said the company was ready to supply the vaccine as soon as feasible, keeping it in frozen form in an attempt to prolong its shelf life. Once the vaccine is shown to be effective, the company can fill vials and begin shipping them to nations that have signed supply deals, they said.

Pam Cheng, head of global operations and information technology, said the group was on track to deliver study results by the end of the year.

AstraZeneca also said it had committed to supplying the vaccine at no profit “in perpetuity” to lower income countries, something it has pledged to do for the whole world while the pandemic continues.

The Financial Times reported last month that the company has the right to declare the pandemic over and potentially move to post-pandemic pricing by July next year, although AstraZeneca has said it will seek expert guidance on when it would be appropriate to do so.

The drugmaker also has the right to add 20 per cent on top of the cost of goods manufactured to ensure it is not lossmaking in producing the jab — a provision Mr Soriot said was there to account for related costs that are expected to exceed $1bn.

The company on Thursday reported a 4 per cent fall in third-quarter underlying earnings per share to $0.94.

Total revenues for the period rose 3 per cent to $6.6bn. Adam Barker, an analyst at Shore Capital, said the two metrics missed consensus estimates by 1 and 4 per cent, respectively. 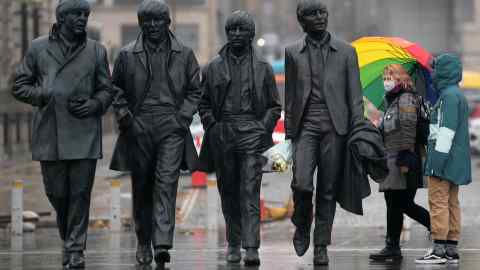 Drugmakers, including AstraZeneca, have been battling headwinds brought on by the pandemic, which has slowed enrolment in large-scale trials and worked to dissuade or prevent patients from accessing routine care, weighing on prescription rates and sales.

However, AstraZeneca on Thursday maintained its outlook for the year, expecting total annual revenues to increase by a high single-digit to a low double-digit percentage, and earnings per share to grow by a mid- to high-teens percentage.

The company’s London-listed shares, which have risen 11 per cent in the year to date, were little changed in morning trade, edging 0.3 per cent higher.

Previous Post“Riot” Declared In Portland; Arrests Made In NYC After US VoteNext PostKosovo President Hashim Thaci resigns to face war crimes charges at The Hague