Asian trade deal set to be signed after years of negotiations

An Asian trade pact almost a decade in the making is set to reach fruition this weekend with negotiators near agreement on the Regional Comprehensive Economic Partnership.

Trade ministers held a video conference on Wednesday to prepare for a Sunday summit of national leaders that may include a virtual signing ceremony. Ministers in Vietnam and Indonesia said they expected a deal.

Covering almost a third of global economic output, RCEP will create unified rules of origin across much of the region to replace a mishmash of bilateral trade deals.

Analysts said the deal marked a big step towards economic integration and would further diminish US influence in the region after President Donald Trump withdrew from the Trans-Pacific Partnership, another large regional trading pact.

“RCEP significantly extends the scope of trade and investment liberalisation through chapters that create a common rules of origin framework as well as strengthening intellectual property protection, trade in services and reducing barriers to investment.”

Rules of origin are criteria that determine where a product was made for the purpose of giving it preferential treatment under a trade agreement.

RCEP will include the 10 members of Asean — Brunei, Cambodia, Indonesia, Laos, Malaysia, Myanmar, the Philippines, Singapore, Thailand and Vietnam — as well as Australia, China, Japan, New Zealand and South Korea.

Many of the members have existing trade agreements and RCEP is not expected to lead to large overall reductions in tariffs. But it will combine the existing deals and bring Asia a step closer to being a coherent trading zone like the EU or North America.

Li Chenggang, China’s deputy commerce minister, on Wednesday said that legal checks on RCEP documents had already been completed in what he called a “milestone” agreement that would “revive confidence in regional economic growth”.

The deal was marked by a tug of war between China, which was focused on tariffs and goods trade, and Japan and Australia’s preference for a “higher quality” deal with more provisions in areas such as ecommerce and government procurement. 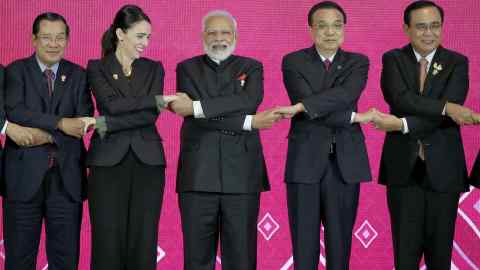 Fears about Chinese domination increased after India withdrew from the negotiations in November 2019. Indian business groups warned they would be swamped by an onslaught of cheap Chinese imports. New Delhi also felt China was unwilling to make concessions in services, where India has a competitive advantage.

Tokyo and Canberra have tried to persuade New Delhi to come back to the deal and RCEP is likely to include special provisions allowing India to join at a later date.

The 15 remaining countries, in need of an economic boost after the Covid-19 pandemic, have decided to go ahead.

Mr Biswas said the next US administration would have to wrestle with the consequences of being outside both of the big multilateral trade agreements in Asia-Pacific. “However, US multinationals will be able to benefit from the RCEP provisions through their subsidiaries operating within member countries,” he said.