As World Re-Opens I Like JETS As A Speculative Play (NYSEARCA:JETS)

There have been a lot of speculative sectors and companies in the “day-trading revolution” of the past 1-2 months as embodied by Barstool Sports founder Dave Portnoy. Many of these companies are in extremely at-risk situations and carry a non-negligible chance of bankruptcy reorganization or, in some cases, already have declared and still remain in the market spotlight such as Hertz (NYSE:HTZ).

Yet one sector which I believe has just enough reduced risk of long-term/permanent debilitation and is still at a price-level where it is a worthwhile risk-reward value play is the airline sector and particularly as represented by the U.S. Global “JETS” ETF (JETS).

Airlines already are seeing a massive resurgence in demand as the industry has adapted with a variety of precautions to the COVID-19 pandemic and the most restrictive prohibitions on travel have been or are being lifted. JETS, as a well-diversified representation of the broader airlines sector and still down immensely year-to-date, seems poised to continue its resurgence while avoiding black swan bankruptcy risks that remain present, yet unclear, for numerous companies deeply affected by the pandemic.

As World Re-Opens Air Travel Is Coming Back Strong

April, as priced in by the JETS ETF in March, was a horrendous month for air travel as passengers were down roughly 96% year-on-year. 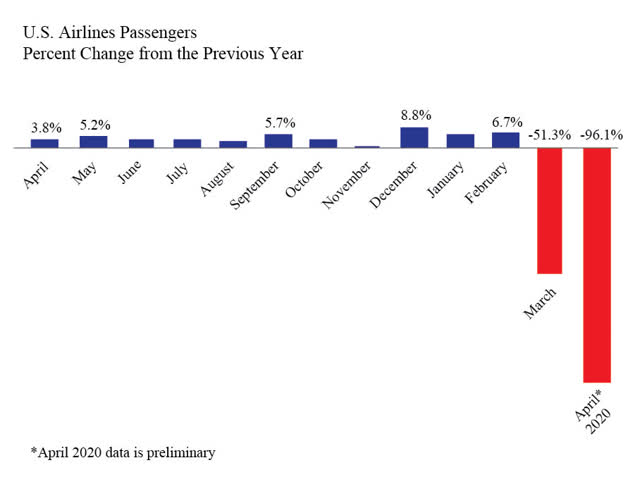 However, since then, we’ve seen airlines begun to see what looks like a permanent revival. Airlines now have implemented health protocols, including questionnaires, screenings, social distancing, and more, that allow them to be in compliance with government regulations to protect against COVID-19 as well as gain the trust and confidence of customers again. These new health measures are likely to reduce the likelihood of a total closure and demand collapse the likes of which we saw in March/April from happening again. Furthermore, and due to both the health protections and generally decreasing cases, the nearly total decline in international travel in March/April as countries closed off flights from one another is now easing as slowly countries begin to build international pathways once again to countries they deem low-risk for the pandemic.

Due to these factors we are already seeing airlines experience a surge in demand for travel as pent-up passengers seek to begin moving around again for leisure and/or business. Air routes, which seemed to be being cut by the day in March/April, are now on a steady track up and especially for international flights. This is all even still without a vaccine for COVID-19 and once that happens, then even a partial rebuilding of what once was likely would mean a rebound in fortunes for airline companies. People may not need cruises, but they need to travel.

Furthermore, the risk of the airline industry completing falling apart due to lack of cash has been reduced immensely due to a combination of government loans and raising capital through issuing shares and debt. While the industry may suffer some hampering through the added debt burden, like many other companies and sectors too right now, nonetheless, it has been so hard-hit in its market prices that even a partial rebound may mean significant value to be gained.

The JETS ETF Is Extremely Well-Structured For Diversification And Stability

Every day it seems we are seeing more and more companies declare bankruptcy and airlines have not been immune to such as well. Even without bankruptcy reorganization many airlines have been engaging in capital dilution to raise much-needed cash. This black swan risk remains immense for its share-price destroying effect and it is extremely difficult to determine what companies are the most likely to experience such due to the unprecedented nature of the crisis.

The JETS ETF has over 39 holdings in a well-diversified basket of airline companies not just in the United States but across the world. The top 5 holdings account for just 42.1% of the ETF, making it in my opinion an extremely well-balanced sampling of nearly the entire airline sector. It has a slightly high, but not overly so, fee at 0.60%. After a surge in inflows this year it currently has $1.197 billion in assets under management, making it liquid and at enough of a critical mass to have little to no concerns over structural risks.

The JETS ETF rallied immensely in early June, breaking out of the $11 to $15 range it had found seeming stability at from mid-March until the end of May. This sudden breakout seemed excessive as essentially within the span of two weeks the JETS ETF doubled in price for no apparent particular reason and has in recent weeks begun falling down to an appropriate price again as the day traders have fled it. Yet, at now just about $16.5 per share and still down about 50% YTD, it seems still an extremely good entry point for investors who see perhaps a medium-term partial return to normalcy for the airline industry.

Airlines at the moment are definitely a speculative play. We could continue to see onerous bailout or capital raising terms, a reduction in future share buybacks, some risk of re-closures, and companies simply unable to hold up the albatross of these new debt and business conditions. Yet airlines to me also appear one of the lower risk areas of the ‘rebound’ sectors due to their necessary function in the world and the adaptions and resurgence they are already seeing and seem on track to continue. Amid this, the JETS ETF provides an extraordinarily well-developed method of gaining exposure to the industry while reducing the extremely present risks of any one particular company going upside down.

Disclosure: I am/we are long JETS. I wrote this article myself, and it expresses my own opinions. I am not receiving compensation for it. I have no business relationship with any company whose stock is mentioned in this article.