If Beijing had hoped to intimidate Hong Kong’s Jimmy Lai with his arrest under a new national security law this week, the outspoken media mogul did not show it.

A day after police led Mr Lai away handcuffed from his headquarters during a raid by hundreds of officers, his flagship Apple Daily tabloid newspaper sounded a defiant note.

“Apple Daily will definitely fight on,” said a headline written in giant red characters across the front page on Tuesday.

The detention of Mr Lai, whom Beijing has accused of colluding with foreign elements and organising anti-government protests in Hong Kong, was the government’s toughest action yet against a media figure in the Asian financial hub.

Analysts fear his detention might be only the first such move as Beijing rounds up pro-democracy figures and the heads of a protest movement that last year brought Hong Kong to a halt and sparked fear of Chinese military intervention in the territory.

The arrest is also set to increase tensions between China and the US over Hong Kong. Washington and Beijing this month traded sanctions over China’s June imposition of the new security law, which punishes crimes such as sedition and collusion with foreign elements with up to life imprisonment. The US has also revoked the special trading status it awarded the territory on its 1997 handover to China from the UK.

In a city whose media have traditionally been among Asia’s most vibrant, Mr Lai, a fashion entrepreneur-turned-newspaper publisher, has long stood out for his blunt opposition to mainland Chinese interference in Hong Kong.

“The communists — for them it is [about] control, control, control. They can’t have people voicing out their dissatisfactions. They don’t want people to resist them,” he said in an interview with the Financial Times in April. “This is the beginning of the end for HK.”

Estimated by Forbes in 2008 to have had a fortune worth $1.2bn, the 72-year-old Mr Lai was born in mainland China. Smuggled into the territory on a fishing boat when he was 12, he worked in a textile factory and in 1981 set up a retail clothing chain, Giordano.

After the Tiananmen Square massacre in 1989, he entered the Hong Kong media. His Next Digital group, which owns the Apple Daily, has been criticised for sensationalist coverage but remains one of the territory’s main pro-democracy media organisations.

Beijing has long railed against Mr Lai, accusing him of funding Hong Kong’s 2014 Umbrella Movement as well as the more recent protests. He has also met senior US government officials and lawmakers, including US vice-president Mike Pence and secretary of state Mike Pompeo, further enraging his Communist party critics.

“He is a traitor, a criminal and a force of evil who has sowed violence and chaos in arguably one of the freest and most prosperous cities in the world,” China’s state-owned Global Times tabloid wrote.

The Hong Kong and Macau Affairs Office, the Beijing body overseeing the territory, listed a litany of complaints against him after his arrest on Monday. These include allegedly supporting and financing forces in favour of Hong Kong independence and colluding with external forces — serious accusations under the new national security law. Complex cases under the legislation can potentially be taken to the mainland for trial. 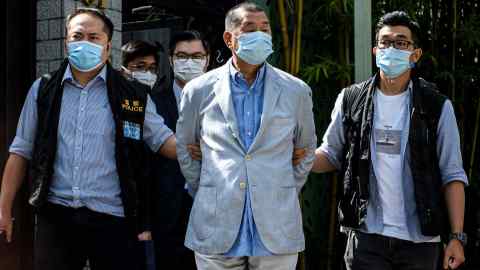 Mr Lai’s arrest, his third this year, came as police rounded up nine others including his two sons and activist Agnes Chow, formerly of the Demosisto political group, who were also suspected of allegedly colluding with foreign forces and conspiracy to defraud.

“I think the only way that we will be safe or that we will slow down the takeover of Hong Kong affairs will be . . . the support of international governments, especially the American government . . . This is our only saving grace now,” Mr Lai said in the April interview.

With US support so far proving ineffective in stopping Beijing, the territory’s pro-democracy movement is bracing for a wider crackdown.

Beijing has branded Mr Lai one of a so-called Gang of Four of senior pro-democracy leaders it accuses of fomenting unrest. They also include Anson Chan, former chief secretary in the Hong Kong government, and leading pro-democracy politicians Martin Lee and Albert Ho.

The city’s media have also been put on notice, analysts say. The use of 200 officers to search Mr Lai’s offices was a symbolic show of force.

Cheung Kim-hung, president of Apple Daily, declared it would be business as usual after the raid. Supporters and speculators drove the company’s share price up 1,200 per cent by Tuesday afternoon. Many ordinary Apple Daily readers, such as Lam Siu-Wing, a teacher, crowded newsstands to buy a copy of the paper in support of Mr Lai. “I somehow expected that he would be arrested. Therefore, I wasn’t so shocked,” Mr Lam said.

But many wonder how long Apple Daily and other media groups can withstand the pressure from Beijing.

“It [the arrest and raid] is a strong signal to all the media in Hong Kong that more action will be taken,” said Fu King-wa, an associate professor at the journalism school of the University of Hong Kong. “This is just the beginning.”

Video: How Beijing is cracking down on Hong Kong