Heavy fighting over the disputed Caucasus mountain region of Nagorno-Karabakh intensified over the weekend as Armenian forces bombarded Azerbaijan’s second city in retaliation for attacks on the capital of the breakaway territory.

One person was killed and more than 30 injured after several rockets landed on residential areas of Ganja on Sunday, according to Azerbaijani officials. Ganja lies in the west of Azerbaijan to the north of Nagorno-Karabakh, close to crucial oil and gas pipelines that run from the capital Baku to Turkey.

Azerbaijan and Armenia have been at loggerheads for more than three decades over the enclave inside Azerbaijan inhabited by Armenians. The recent fighting is the worst since the two sides fought a war when Nagorno-Karabakh broke away from Baku following the collapse of the Soviet Union.

The latest hostilities have ratcheted up tensions between Russia and Turkey, which on this occasion has openly supported Azerbaijan’s attempt to reclaim the territory. Moscow and Ankara are already on opposites sides of the civil wars in Syria and Libya.

Arayik Haratyunyan, the Armenian leader of Nagorno-Karabakh, said in a tweet that he had ordered an artillery attack against Ganja’s military airport “as act of self-protection, in response to days-long deliberate shelling” of civilian areas in his region.

Stepanakert, the capital of Nagorno-Karabakh, has been hit by Azerbaijani shelling on a number of occasions since hostilities erupted on September 26. Armenian officials said the nearby town of Shusha was also hit on Sunday. The two sides have accused each other of using cluster munitions.

Azerbaijani officials denied that Ganja’s military airport had been hit despite Armenian claims the facility had been destroyed. The two sides have routinely disputed each other’s claimed battlefield successes during the recent fighting.

Baku claimed the attack on Ganja was launched from Armenian territory, not Nagorno-Karabakh, pinning the blame directly on Yerevan.

At least 240 people have been killed in eight days, according to reports from both sides, although the actual death toll including civilians may be much higher.

The Azerbaijani government said the attack on Ganja was a provocation intended to widen the scope of the war well beyond the borders of Nagorno-Karabakh.

Turkey’s foreign ministry condemned the artillery attack on Ganja as a “violation of all the principles of International law”. 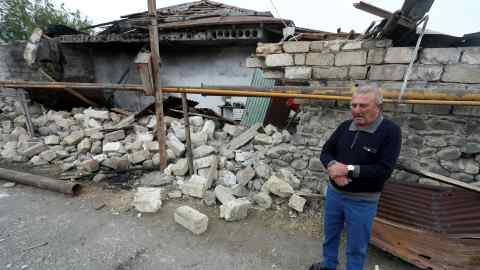 “These attacks are an indication of the desperation of Armenia and that it will not shy away from committing crimes against humanity in order to continue its illegal occupation,” it said.

Mr Haratyunyan denied his forces were deliberately targeting Azerbaijani civilians or its economy.

France, Russia and the US, which are members of the Minsk group that has overseen peacemaking attempts since 1992, last week called for an immediate ceasefire. The Armenian government said it was willing to engage in talks. Ilham Aliyev, the Azerbaijani president, said Armenian forces had to withdraw from Nagorno-Karabakh before dialogue could begin.