On 22 May, Argentina failed to make a USD503-million payment of delayed interest on three bonds on the expiry of their grace periods, entering a technical default. On 26 May, both Fitch and S&P Global Ratings moved Argentina to restricted default ratings. The government is restructuring USD66 billion of its sovereign debt with private creditors.

Technical default likely through June. Despite Argentina missing the payment, its Minister of Finance Martín Guzmán continues to negotiate with bondholders and has extended the deadline to reach an agreement until 2 June. Some progress is being made as both creditors and the Argentine authorities have expressed willingness for a degree of compromise.

BlackRock, one of the major bondholders, has revealed that it is willing to lower its demand of 58-68% of net present value (NPV) of nominal value to 50-55%. Recent Argentine media reports suggest that the government has improved its proposal to a 45% value. The perceived narrower gap led Argentina’s EMBI+ bond spread index to tighten on 26 May by 259 basis points (9.3%) to 2,520 basis points over US Treasuries, closing at 2631 basis points, its lowest level since March. The government is eventually likely to accept an increase from its original target of 40% NPV to 45-50%, and approve a shorter grace period than its proposed three years (see Argentina: 19 May 2020: Bondholders present counterproposals to Argentina’s government, increasing likelihood of debt-restructuring agreement, but initial temporary default likely).

Negotiations are likely to extend beyond the deadline, prolonging technical default through June-July. IHS Markit’s baseline scenario is that the government will ultimately reach a compromise agreement with bondholders to restructure outstanding debt, therefore avoiding a full and protracted default.

President Alberto Fernández is likely to come out of the situation strengthened, but protests and strike risks will increase if future debt-service arrangements force the government to impose spending cuts. Reaching a settlement with bondholders is likely to further boost Fernández’s popularity, which now stands at around 80%, according to some polls, after successful management of the coronavirus disease 2019 (COVID-19)-virus outbreak. Strict confinement measures imposed early during the pandemic have helped to contain the spread of the virus and have received cross-party support, permitting the gradual reopening of the economy.

COVID-19-virus-related policy has enabled Fernández to present himself, rather than Vice-President Cristina Fernández de Kirchner (CFK), as controlling the government policy agenda and that he is leading a united Peronist coalition. His pledge to prioritise reducing poverty and hunger over servicing debt and to not implement austerity measures has contributed to a “truce” with unions and social organisations, which have so far supported the government and eased back on protests and salary demands.

However, reaching a debt-restructuring agreement with a shortened grace period would give the government less leeway to finance social programmes needed during the current recession, deepened by the COVID-19-virus spread; IHS Markit forecasts an 8% GDP contraction in 2020, with further downgrades likely. If an eventual deal with bond creditors translates into spending cuts and austerity measures, it would be likely to trigger protests and strikes towards late 2020. Cuts in social programmes would also create frictions between the government and the Kirchnerist faction of the ruling coalition Frente de Todos (Everybody’s Front), threatening the cohesion of the bloc.

The country will not have external financing options even if it reaches a quick agreement with bondholders. The loss in NPV of the defaulted bonds will raise external financing costs; the grace period during an economic collapse implies that the debt-service “savings” will not be enough to cover current spending. Argentina’s fiscal accounts have severely deteriorated in the first quarter of 2020, posting a 2.3%-of-GDP primary deficit in 2020, without taking into account debt service, from a 0.2% primary surplus in the first quarter of 2019.

READ ALSO  Wall Street Concludes That No Matter Who The Next President Is, It Will Be Bullish For Stocks

Primary expenses rose nearly 74% year on year (y/y) in March, therefore demonstrating that the ramping up in fiscal spending began prior to the COVID-19-virus pandemic since the country’s lockdown was introduced only on 20 March and most pandemic-related extraordinary payments took place in April and May. Financing fiscal spending will continue to take the form of monetary base expansion, raising the risk of a significant devaluation of the official exchange rate. 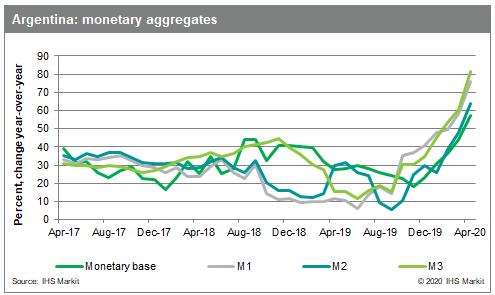 The banking sector will be moderately affected because of low exposure to sovereign debt; a bank run is unlikely. Argentina’s banking sector is only minimally exposed to the USD66-billion debt being restructured as these bonds only represent 0.08% of the banks’ total assets. As a buffer against losses, with impairment likely to rise given the adverse economic background, banks display robust levels of capitalisation, with the sector’s capital adequacy ratio (CAR) standing at 21.8% (18.7% for state-owned banks, 21.4% for foreign-owned banks and 25.7% for privately owned banks, according to March’s figures).

Despite significant withdrawal of dollar deposits throughout the last year (these fell by 44.4% in the year following April 2019), we see no indicators of a bank run, such as that experienced in Argentina in 2001. From a liquidity perspective, banks hold sufficient liquid assets to cover 39.2% of total deposits, 64.6% if bonds admissible for central bank repo operations were included. Furthermore, until April, local-currency deposits had been growing faster than inflation (by 56.2% y/y).

These figures suggest short-term stability, but sovereign risks in the banking sector are likely to rise in the three- to five-year outlook. There is a high probability that the government will finance itself by selling increased amounts of government debt to banks, further linking the sector to the performance of the sovereign.

Previous PostHealth experts are worried about infections in the winterNext PostSE: George Floyd Protests Erupt in Cities Across the U.S., National Guard Deployed