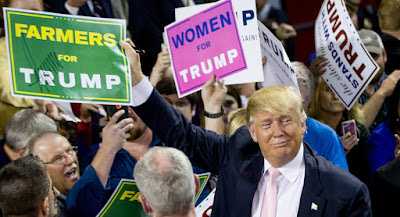 He provides us with these facts:

Overall, U.S. agricultural exports are almost 40 percent of the value of farm production, up from just 15 percent circa 1970. Globalization hurt some parts of U.S. manufacturing, with particularly harsh effects on some small industrial cities. But the rise of China and the growth of world trade have been nothing but good news for farmers.

Under Trump this has changed, thanks to Trump’s trade war. China has retaliated in the trade war launched by Trump by slapping tariffs on US agricultural products shipped to China:

[F]armers are hurting financially. Investors are worried about a possible recession for the economy as a whole, but the farm recession is already here, with falling incomes, rising delinquency rates and surging bankruptcies. And the farm economy’s troubles stem directly from Trump’s policies.

According to the American Fram Bureau Federation, “Across the U.S., farm loan delinquencies and Chapter 12 bankruptcies are rising…In the year ending June 2019, Chapter 12 farm bankruptcies increased in every region in the United States, except for the Southeast. However, there were still a significant number of bankruptcies filed in that region.

“The Midwest and Southeast had the highest number of filings, 240 and 100 bankruptcies in the past year, respectively. The Midwest is up from 215 filings from the previous year to 240 filings, an increase of 12%. The biggest increase in bankruptcies, 50%, occurred in the Northwest, which includes Washington, Oregon, Idaho, Montana and Wyoming.” 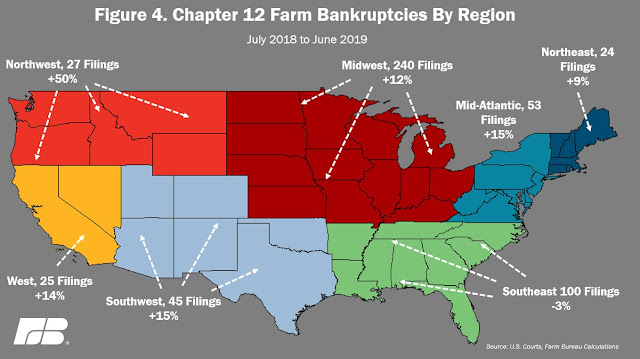 Still, Krugman notes, according to one recent poll, 71 percent of farmers approve of Trump’s performance.

And he provides the evidence that Trump and his administration see them as nothing but useful idiots:

Recently Sonny Perdue, the agriculture secretary, let the mask slip during a meeting with farmers complaining about their plight. “What do you call two farmers in a basement?” he snarked. “A whine cellar.”

Trump’s own remarks about trade with Japan were even more telling. According to a White House transcript, Trump complained that while Japan sends us millions of cars, “We send them wheat. Wheat. (Laughter.)” Do farmers realize that their president considers their livelihood a joke?