Ardelyx has already completed 3 Phase 3 trials for tenapanor for serum phosphorus control in dialysis patients that have all garnered positive results, and the company has stated it will now file an NDA sometime in the middle of this year. Hopefully this means an approval and launch by mid-2021. The drug has patent protection at least until 2029, so Ardelyx will have a roughly 8-year window to capitalize on US sales.

Tenapanor’s efficacy from its Phase 3 trials looks strong, so I feel pretty good about the drug’s chances of receiving FDA approval. For a good summary of this data, check out this prior article by Healthcare on the Move. The drop-out rate due to diarrhea is the only real concern, but the current standard of care therapies also cause diarrhea and only 1 trial of tenapanor had a substantial amount of diarrhea-related drop-outs. Other trials showed lesser frequency and led the company to suggest most events occurred in the first few days of use and were a transient rather than chronic problem.

Hyperphosphatemia is a significant, negative predictor of health outcomes for patients on dialysis, and up to 95% of patients on dialysis need help controlling phosphate levels. Phosphate is present in much of what we eat, so it’s difficult for a patient with chronic kidney disease to keep it within a normal range. There are about 320,000 end-stage renal disease patients suffering from hyperphosphatemia in the US alone. Hyperphosphatemia is an independent risk factor for cardiovascular problems in these CKD patients that are already predisposed to them.

The current standard-of-care therapy is to take numerous phosphate binder pills with all meals and snacks—often 12 or more each day—as well as trying to eat a low phosphate diet. 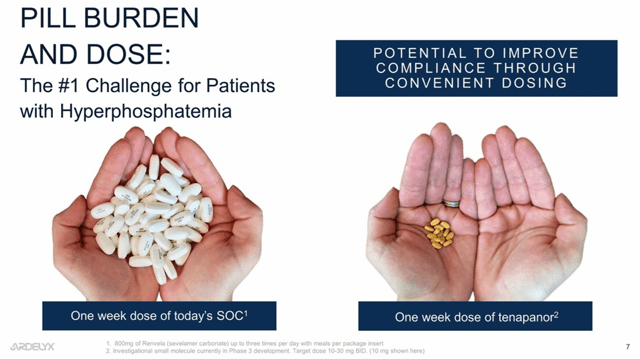 As you can see from Figure 1, the difference in pills required is remarkable. Accordingly, there’s a 50% non-compliance rate for phosphate binders on average and up to 2/3 of patients on these current standard of care drugs still do not have well controlled levels of serum phosphorus. Ardelyx’s PHREEDOM long-term Phase 3 trial showed a 45% improvement in phosphate control over the current standard of care therapy. Tenapanor would be the only non-binder therapy on the market if approved.

Ardelyx estimates that tenapanor could bring in peak sales between $500 million and $700 million in the US alone. Sales at that level would be extremely significant for a company with a current market cap around $650 million.

A large part of Ardelyx’s commercial strategy is to partner with other, more experienced companies in the industry, especially as it applies to getting their drugs approved in foreign markets. Canadian partner Knight Therapeutics now has approval to market Ibsrela for IBS-C. Ibsrela is already approved in the US for IBS-C, but Ardelyx intends to find a commercial partner rather than marketing the drug itself.

Knight also has the rights to tenapanor for all indications in Canada and will pay tiered royalties ranging from mid-single digits to the low twenties. Ardelyx also stands to receive up to $19.2 million in milestone payments.

Ardelyx also already has partnerships in Japan and China for tenapanor which should produce some additional revenue for the company. Ardelyx will receive a high teens royalty on tenapanor from its Japanese partner as well as up to $50 million and $78.3 million more in developmental and commercialization milestone payments respectively. Ardelyx will receive a mid-teens royalty from its Chinese partner on tenapanor as well as up to $110 million more in milestone payments.

The other drug in Ardelyx’s pipeline is RDX013 for hyperkalemia, another common problem in both heart and kidney disease patients. RDX013 is a non-binder therapy that helps the body secrete potassium into the lumen of the gut, which theoretically could help lower serum potassium levels regardless of whether it was taken at the same time the potassium was ingested. Preclinical models have provided a very preliminary proof-of-concept.

A good therapy for hyperkalemia is important because having high levels of potassium in the blood causes problems with heart conductance and increases a patient’s overall risk of death. Additionally, the RAAS inhibitors that are often used to control hypertension in patients with cardiorenal issues can cause or worsen hyperkalemia, so there is a clear subset of patients that would benefit from RDX013 being approved.

The US market is 2.1 million people if you combine heart failure and chronic kidney disease patients with hyperkalemia. The only 2 drugs currently on the market are potassium binders with largely the same drawbacks as the phosphorus binders described above. The sales and marketing required for a launch of RDX013 would almost entirely overlap with what Ardelyx will hopefully already have in place for tenapanor by the time RDX013 is approved. RDX013 is still very early though, not having made it into the clinic yet.

Ardelyx reported having $223.2 million in cash and equivalents at the end of the first quarter. Given that Ardelyx’s cash burn rate annualized to $90 million in the first quarter, the company might could get as far as early 2022 without another cash raise and maybe longer if revenues start to pick up. However, it’s also worth noting that Ardelyx got a $50 million loan from Solar Capital Ltd. back in 2018 that will mature on November 1, 2022. As a consequence, it seems likely that Ardelyx will need some additional capital, although it might be a relatively small amount and may be possible for the company to raise it non-dilutively given the low current debt level.

Ardelyx’s value proposition for investors at this point is essentially driven by tenapanor for hyperphosphatemia in the US and the potential milestone and royalty payments Ardelyx may receive from commercial partners. RDX013 is too early to carry substantial value for the company. I’ve seen peak sales estimates for tenapanor in the US that range from $377 million to $782 million. On top of this, Ardelyx stands to potentially receive up to just over $250 million in milestone payments, not to mention ongoing royalties from the tenapanor sales by its commercial partners.

My modeling suggests the company could be somewhat undervalued at present. Keep in mind Ardelyx has no real catalysts for a while. This means that even if the company is undervalued, there is a substantial chance it could stay that way for a long while. Also worth noting is that a discounted cash flow model like what I used to estimate Ardelyx’s value is best to show the extreme cases, meaning it will better be able to suggest that shares are generally undervalued or overvalued right now versus coming up with an exact estimate that we can feel confident about.

Because of that, I tried to use a very low estimate for total revenues for Ardelyx. I valued that at the midpoint of the estimates for peak sales of tenapanor for hyperphosphatemia which was $579.5 million. This is below the mid-point of the company’s estimated range from $500 million to $700 million. I also only factored in potential milestone payments of 40% of the total available which is $100 million, and I didn’t independently factor in any royalties whatsoever.

I estimated SG&A expenses as 35% of revenue and marketing expenses at 5% of revenue, at the point where the company has substantial cash flow in a few years, and I scaled the numbers up fairly evenly from present values for the years in between. I factored in R&D for the whole current pipeline despite not accounting for revenue beyond tenapanor for hyperphosphatemia. I also adjusted for future cash flow needs based on continuing cash burn for what will likely be the next 2+ years before revenue is high enough to support the company’s ongoing operations.

Figure 3: Present Value Estimate of Tenapanor for Hyperphosphatemia US Cash Flows (source: Ardelyx’s 10-Q and my calculations based on it)

As you can see from Figure 3, I get a present value based on a fairly conservative estimate of US only tenapanor for hyperphosphatemia cash flows that is a little above where Ardelyx shares have been trading lately in the $7 per share range. This gives me a good bit of confidence that the stock is undervalued given that I didn’t factor in any US Ibsrela sales, royalty payments of any kind, or any present value for RDX013.

There’s a good bit to like about Ardelyx stock at the moment. The company is pursuing cardiorenal diseases with a clear need for new treatments, and Ardelyx has made some savvy partnerships that will hopefully bring in additional revenue and milestone payments for the company. Finally, Ardelyx is trading at a market cap around the level of expected peak sales for just one of its potential therapies in the US market alone. I don’t currently have a position, but I will be looking to establish one over the coming months on any dips below $7 per share, which would give a 20%+ margin of safety to my conservative value estimate.

Additional disclosure: I’m not a registered investment advisor. Despite that I strive to provide the most accurate information, I neither guarantee the accuracy nor the timeliness. Past performance does NOT guarantee future results. I reserve the right to make any investment decision for myself without notification. The thesis that I presented may change anytime due to the changing nature of information itself. Investment in stocks and options can result in a loss of capital. The information presented should NOT be construed as a recommendation to buy or sell any form of security. My articles are best utilized as educational and informational materials to assist investors in your own due diligence process. You are expected to perform your own due diligence and take responsibility for your actions. You should also consult with your own financial advisor for specific guidance as financial circumstances are individualized.