Arch Resources (NYSE:ARCH) is attempting to transition away from the thermal coal business while expanding its metallurgical coal operations. This makes sense as thermal coal in the United States has been challenged by continued closures of coal-fired power plants and relatively weak natural gas prices. On the other hand, while metallurgical coal prices aren’t strong at the moment, the easing of the pandemic in 2021 should help boost its outlook.

Arch Resources is looking to exit the thermal coal market. Arch produced close to 75 million tons of thermal coal at its Powder River Basin mines in 2019. It expects to produce around 54 million tons in 2020 and is looking at a plan that could reduce production by another 50% over the next two to three years.

Arch Resources will sell or close its thermal coal assets in the end while attempting to harvest cash from those operations to help fund closure costs if it is unable to find an appropriate buyer. It has approximately $240 million in asset retirement obligations on its books. 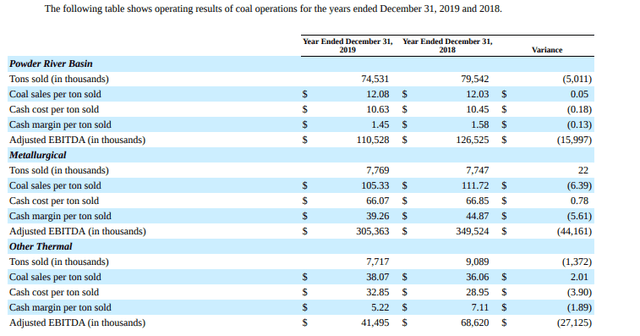 Reduced sales volumes (which also affected costs per ton) and lower prices (not helped by weak natural gas prices and the pandemic) contributed to Arch’s thermal coal assets only producing $20 million in adjusted EBITDA during the first three quarters of 2020.

While Arch Resources is trying to get out of the thermal coal business, it is also expanding its metallurgical coal operations. Arch intends on completing the Leer South longwall project in 2021 (longwall production starting in Q3 2021). This would access the same reserve base as its Leer mine and it now expects to produce up to 4 million tons of High-Vol A met coal production per year from Leer South. 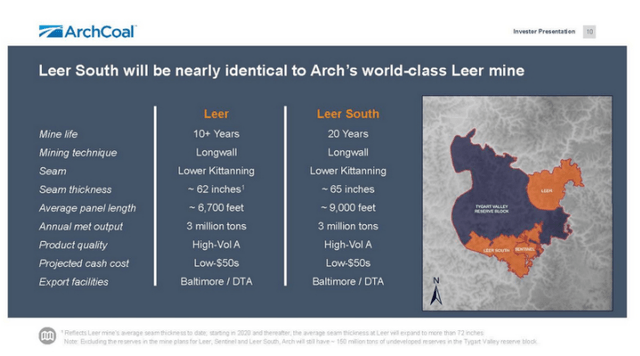 The projected cash cost of the Leer South mine was in the low-$50s per ton in 2019, but may end up lower now as Arch has reduced cash costs for the Leer mine down to the mid-$40s per ton recently.

This may allow the Leer South and Leer mines to generate margins of around $50 per ton if met coal prices got back to Q4 2019 levels.

Arch Resources repurchased 10.09 million shares at an average share price of $82.01 over the past few years for an aggregate purchase price of around $827 million. While Arch is still in decent financial shape now, the effects of the pandemic have prompted it to raise money via convertible notes that could potentially add back around 41% of the repurchased shares for gross proceeds of around 19% of the repurchase cost.

Arch’s recent $135 million convertible note offering could potentially add another 3.62 million shares back to its outstanding share count. These notes have an effective conversion price of $37.32. The purchasers had the option of purchasing another 15% in notes, which could add $20 million in note principal that could convert into another 0.54 million shares.

At this point, I’d attribute zero value to Arch’s thermal coal assets. Cloud Peak Energy managed to get a modest amount for its assets in its bankruptcy sale. More recently, Contura Energy (NYSE:CTRA) paid $50 million (including the transfer of cash collateral) for Iron Senergy to take over its Pennsylvania mines and the $169 million in associated asset reclamation obligations. Thus the value of thermal coal assets is mainly in getting a company to take over the asset reclamation obligations.

After Leer South reaches full production levels though, I estimate that Arch may be able to generate around $300 million EBITDA, excluding any contribution from its thermal coal assets. This assumes that met coal prices rebound to Q4 2019 levels, which are above current levels but also well below 2018 and 1H 2019 levels. I believe this is a reasonable assumption for longer-term post-pandemic met coal prices.

At that EBITDA level, Arch Resources would be worth approximately $46.60 per share based on a 3.5x EV/EBITDA multiple. This also assumes that Arch has $150 million in net debt and that its convertible notes are converted into shares.

Arch Resources is attempting to transition into a pure-play metallurgical coal company. Its thermal coal assets have minimal value, but its met coal assets have a lot of potential. Once its low-cost Leer South longwall operation gets into full production, Arch may be able to generate $300 million EBITDA per year without any contribution from thermal coal assets and with a moderate rebound in metallurgical coal prices from current levels. This scenario would make Arch worth around $11 above its current price.

We are currently offering a free two-week trial to Distressed Value Investing. Join our community to receive exclusive research about various companies and other opportunities along with full access to my portfolio of historic research that now includes over 1,000 reports on over 100 companies.