Arbor Realty Trust (NYSE: ABR) is a mortgage REIT which I have written about several times previously. On each occasion, I came to the conclusion that the company was an attractive proposition. While my most recent article about the company was published just a couple of months ago in March, I believe the release of the company’s Q1 2020 earnings on May 8, 2020, coupled with the current situation brought about by the coronavirus, warrants a further look at the company to determine if my conclusion remains the same.

Arbor Realty Trust reported core earnings of $0.31/share for the quarter. While this may be lower than the past few quarters – core earnings per share for each quarter of 2019 came in at $0.33, $0.33, $0.36 and $0.34 – this figure still covers its declared dividend of $0.30/share. Notwithstanding the above, the company reported a Generally Accepted Accounting Principles (GAAP) net loss of $0.54/share for the quarter. The main reason for the difference between the GAAP net loss and the company’s core earnings is due to the following, both of which are significantly higher compared to previous quarters:

As a brief recap, the company has two business segments – Structured Business and Agency Business.

Under its Structured Business segment, the company invests in a portfolio of structured finance assets, mainly in the multifamily market, comprising mainly bridge loans for borrowers who require short-term capital. The company originated $856 million of loans for the quarter, more than double the $416 million originated in the first quarter of 2019 and a slight increase on the $831 million originated the previous quarter. This saw its portfolio grow by approximately 12% from the previous quarter to $4.8 billion, albeit with a slight fall in its weighted average interest rate from 5.98% to 5.70%.

The solid performance of both business segments for the quarter, with the Agency Business segment expected to perform even better in the second quarter, serves to underline the resilience of the multifamily market which Arbor Realty Trust specializes in.

The company’s expenses have remained largely the same compared to the previous quarter, with the exception of its provision for credit losses and loss on derivative instruments as mentioned above. Additionally, it was also mentioned in the earnings call that the company has reduced its overhead and general and administrative expenses by approximately $5 million to $7 million annually, though no further details were provided. The company expects the impact from these savings to increase its core earnings by approximately $0.04/share to $0.05/share.

A recurring theme I have mentioned in my previous articles about Arbor Realty Trust is how the company has built up a source of recurring income from its Agency Business segment, which was formed in 2016. According to CFO Paul Elenio, the company is expected to “generate a predictable annuity of income going forward of around $88 million gross annually and growing, which is up approximately $4 million on an annual basis from the same time last year”.

The above is especially important given the current economic climate, notwithstanding the surprising resilience of the company’s business segments. With an estimated remaining life of 8.9 years on its servicing portfolio, the company has secured a recurring source of income to tide over the current climate.

One of the more obvious risks is that of the company being unable to originate new loans, which in turn will have an impact on the company’s revenues going forward. However, as indicated above, both business segments of the company have been performing fairly well. While this is no indication of the company’s performance for the rest of the year, it undoubtedly shows a reduced likelihood of such an occurrence.

Another risk comes in the form of payments (or lack of) for the company’s existing loans. However, according to the company, only 0.3% of its $15 billion Fannie Mae portfolio and 4% of its $5 billion Freddie Mac portfolio were granted forbearance in April. While the company expects slightly higher numbers in May and June, the current expectation is for numbers to remain low. There are a couple of crucial points to note. Firstly, forbearance simply means a delay in payment instead of a default. Next, CEO Ivan Kaufman added that any discussions of rent forgiveness are “off the table”. Put together, these two points mean the company will still receive the money owed to it; the only question is when. It was also added that there was perhaps surprisingly a certain psychology behind the low forbearance figures, with tenants “valuing their homes” and “looking to pay their rent”.

One other risk is whether the company has sufficient liquidity to meet its financing needs. Due to various measures adopted by the company, both in prior years and in the current quarter, the company has a cash and liquidity position of $350 million. While the company did not go into specifics, it was mentioned during the earnings call that the company believes this amount to be sufficient to “navigate the current market conditions”. Additionally, a look at the company’s existing debt obligations does not show significant debt maturing in 2020. 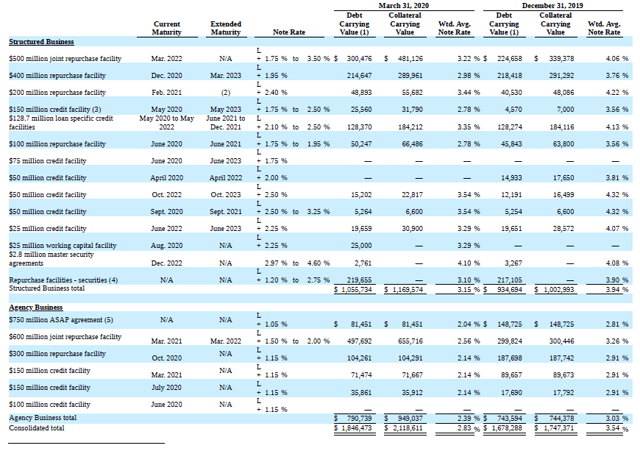 READ ALSO  Business to Biden: prepare for a fight over tax and minimum wage

Based on comments made by both CEO Ivan Kaufman and CFO Paul Elenio during the earnings call (as part of their prepared remarks and during the Q&A), while no commitments were made with regards to future dividends, the company expects to post similar core earnings for the rest of the year. A significant part of this stability can be attributed to its recurring income from the Agency Business segment. As indicated above, the company’s core earnings has been able to cover its dividends. While nothing is ever certain, the comments made by the company point to the likelihood of the company maintaining its dividends for the rest of the year.

Depending on whether the GAAP book value of $8.68/share or adjusted book value of $9.50/share is used, the company has a price-to-book ratio (P/B Ratio) of either 0.90 or 0.83 based on its share price of $7.89 as at May 22, 2020, which means it is currently trading at a discount. P/B Ratio aside, management itself clearly believes in the company’s future, with the company having bought back a million shares during the quarter at $4.

While the company’s share price has risen substantially from my last article (an increase of 60%), it is still trading at a cheaper price than in recent years. With the current share price of $7.89, the company has a forward dividend yield of approximately 15%. Perhaps the most significant factor in the company’s favor is this – the company is internally managed, with management owning over 20% of the company. As mentioned by one of the participants during the call, “nobody thinks like an owner, except the owner”. With a significant stake in the company, management can be trusted to be prudent when making decisions for the company, something especially important given the current economic outlook.

Disclosure: I am/we are long ABR. I wrote this article myself, and it expresses my own opinions. I am not receiving compensation for it (other than from Seeking Alpha). I have no business relationship with any company whose stock is mentioned in this article.