Technology giant Apple (NASDAQ:AAPL) has been one of the market’s biggest winners in the past few months. Not even a month after the company’s Q3 report and stock split announcement sent the stock above $400, shares this week set a new high over $515. With a nearly 150% rise in the past year outpacing the NASDAQ index by almost 100 percentage points, investors are the most bullish that they’ve been on this name in a really long time.

Late Tuesday, we received the bi-monthly update from NASDAQ regarding short interest. For Apple, the data showed a decline of almost 3 million shares. While that’s not much considering the stock’s more than 4.27 billion shares outstanding, it was a decent move in terms of shares short. The graphic below shows this key indicator over the past year. 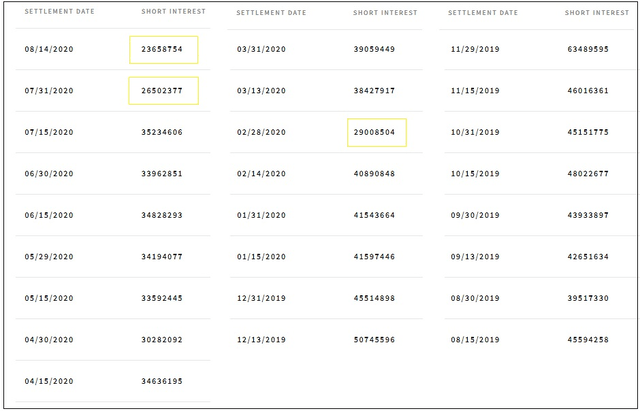 As the yellow boxes show, this was only the third report with short interest under 30 million shares. The latest number is the lowest we’ve seen over the last 52 weeks, but I also believe it’s the lowest figure reported in several years. I first started tracking short interest for Apple in 2012, and in April 2013, the split-adjusted peak was over 291 million shares, so we’ve come more than 90% off that high. It certainly helps that plenty of economic stimulus around the globe has supported markets, sending many short sellers for the exits.

For Apple though, smashing estimates at the Q3 report definitely helped, showing that business has held up during the coronavirus so far. In the past couple of weeks, we’ve seen a lot of bullishness attributed to the stock split, with the same thing happening for momentum favorite Tesla (TSLA) as well. Investors have sent both these stocks to new all-time highs, before their respective splits become effective next Monday. Apple’s power in the Dow 30 will also be reduced even more than I originally thought, given this week’s news that there will be a swap of three new components that have much higher share prices than the names they are replacing in the index.

READ ALSO  The return of the living dead? - Will Japan see a new generation of zombie firms? | Finance & economics

For Apple, the latest rally is more of a revaluation of the stock than anything else. Estimates for the current fiscal year ending in September 2020 have actually come down since the start of this calendar year – revenue average has declined from $276.03 billion to $273.25 billion, with the earnings per share consensus going from $13.07 to $12.92. Part of that is due to the expected delay of this year’s iPhone launch, pushing some revenues and earnings forward to next year. Still though, if we look at the price to earnings ratio for the fiscal 2021 period (ending September 2021), Apple’s forward P/E has gone from 19.7 to 32.4 during 2020 so far. That’s a massive move, considering the business is not really doing that much better than previously thought.

The recent rally has been perhaps the most impressive in market history, sending this name’s market cap right through the $2 trillion level. However, the ferociousness of the jump recently shows a stock that’s perhaps a bit overextended. As the chart below shows, shares were more than $100 over their 50-day moving average earlier this week, a difference of more than 25%. That might not seem like much for a small cap name that has a sudden rally, but it’s rather unheard of to see a stock this large this much above this key short-term technical indicator.

With Apple shares blowing past $500 this week, it seems that we are at a point of extreme bullishness. While the Q3 report was great and the stock split was another positive in investors’ eyes, the valuation has soared, and most technicals look way overextended. Given the current easy money fiscal stance around the globe, short sellers are almost all gone, but you have to wonder if they’ll be back soon should this rally continue moving forward.

READ ALSO  Highly-Educated Americans Are By Far The Most Closed-Minded; Gallup