Apple commits to freedom of speech after criticism of China censorship

Home Financial news Apple commits to freedom of speech after criticism of China censorship
2020-09-042020-09-04By finanz.dk

Apple has for the first time published a human rights policy that commits to respecting “freedom of information and expression”, following years of criticism that it bows to demands from Beijing and carries out censorship in mainland China, Tibet, Xinjiang and Hong Kong.

Apple’s board of directors approved the policy and quietly published it ahead of a deadline of September 5 for shareholders to submit motions for next year’s investor meeting.

The four-page document, cited here for the first time, tries to walk a fine line between upholding human rights while conceding that Apple is “required to comply with local laws” in authoritarian countries.

The document said Apple is “committed to respecting the human rights of everyone whose lives we touch — including our employees, suppliers, contractors and customers”. Its approach is based on the United Nations Guiding Principles on Business and Human Rights.

But it does not mention any particular country, nor does it refer to high-profile dilemmas like what to do when China, the world’s largest smartphone market, asks it to ban apps that help users evade censorship and surveillance.

The iPhone maker’s commitment comes seven months after two-fifths of its shareholders defied management and supported a SumOfUs proposal that would have compelled it to uphold freedom of expression globally. Apple had tried to strike the proposal from the agenda but was denied by the US Securities and Exchange Commission. 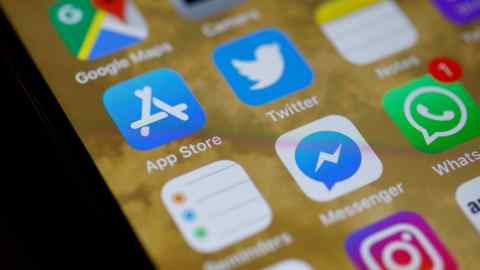 Ms Gupta’s hope is that a board level adoption of the policy will result in greater focus by Apple on freedom of speech.

But she said it was not clear how Apple would create proper oversight or measure progress, and the company had not said how it would disclose the actions it might take in response to government demands that could limit free expression or access to information, she said.

Apple has long said it prizes engagement with governments it disagrees with, but Ms Gupta said there was little evidence that those practices were driving change. “What we have seen with China is a progressively deteriorating human rights situation and an expanded, extreme and unprecedented cyber surveillance state — and now we’re seeing that expand into Hong Kong.”

The $2.2tn company has long been dogged by alleged human rights abuses, including working conditions in factories that assemble the iPhone or its components and the censorship it enables in foreign countries.

In 2017, Apple acknowledged that it had deleted 674 virtual private network apps from its China app store after Beijing “required” it to. Tim Cook, chief executive, said at the time: “We would obviously rather not remove the apps but, like we do in other countries, we follow the law wherever we do business.”

It has also acceded to requests from Beijing to remove news apps, such as Quartz and the New York Times. Last year, Beijing criticised a mapping app used by pro-democracy protesters in Hong Kong. Within days, Apple removed it.

Although the tech giant issues a transparency report twice a year detailing government requests, the report takes a “quantitative approach” that offers “little context for the app removal requests from the Chinese government or explanation of the risks that may be involved,” said Institutional Shareholder Services earlier this year.

According to the Ranking Digital Rights 2019 Corporate Accountability Index, Apple is “less transparent about external requests to restrict content or accounts than most of its US peers, except for Facebook”.

Steven Heim, managing director at Boston Common Asset Management, said: “Apple must be much more transparent regarding implementation of its new human rights policy, including transparency in its responses to requests from repressive governments.”

This article has been amended since publication to correct the name of the Xinjiang autonomous region.